Drivers have several options for getting vehicle repair bills paid after a California car, truck or motorcycle accident. They can seek payment from:

The at-fault driver or his/her insurer is also responsible for the cost of renting a similar vehicle while the damaged one is being repaired.

But just because another driver is at fault, it does not mean the responsible party will necessarily pay up without a challenge.

Our experienced California accident attorneys will fight to get you all the compensation you deserve, including maximum value if your vehicle is totaled.

To help you better understand how to get money for repairs to a vehicle after an accident, our California personal injury lawyers discuss, below: 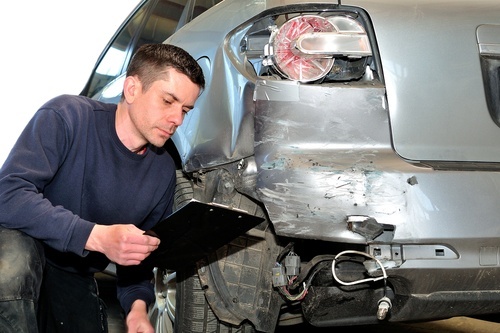 1. What compensation is owed after a car accident in California?

When another driver causes an accident, the driver (or the driver's insurance company) is responsible to pay the innocent party's:

2. Who pays for car repairs after a California accident?

2.1. If the driver has optional collision coverage

If a driver has optional collision insurance with his or her auto insurance, the insurer must pay the costs of repairing or replacing a vehicle after an accident, regardless of who was at fault.

Collision coverage is not required in California, but many drivers purchase it, particularly if their vehicle is valuable.

Using collision coverage (if purchased) is the quickest way to get a vehicle repaired after an accident in California. The insurer can then seek reimbursement from the other driver if the other driver caused the accident.

Example: Julius is driving home on the Santa Monica Freeway after seeing a movie at the Grove. He gets into a truck accident when the driver of the truck crashes into his car due to texting while driving. Julius' car sustains $6,000 in damage.

2.2. If the driver does not have collision coverage

A driver who does not have collision coverage has several other options for getting car repairs paid, depending on the circumstances.

If the at-fault driver has auto liability insurance in California, the other driver can:

If the at-fault driver is uninsured the other driver can:

3. Do I need to report an accident to my insurer in California?

Most auto insurance policies require drivers to notify the insurer promptly if they are involved in an accident. Failure to comply with this requirement may affect their right to recover damages under their policy and could lead to the policy being terminated.

Failure to report an accident as required is punishable by:

The penalty is even more serious if the accident involves a serious injury or death.

It may, however, make sense NOT to report an accident when the driver hits a stationary object (such as a fence) and the only damage is minor damage to the driver's own vehicle.

Thanks to Proposition 103, which California voters passed in November 1988, insurance premiums may not increase in California if the insured was not at fault for an accident.

Whether being at fault for an accident will increase premiums depends on a number of factors, including:

Unfortunately, unless the claim was for a very small amount, premiums are likely to increase after an at-fault accident in California. 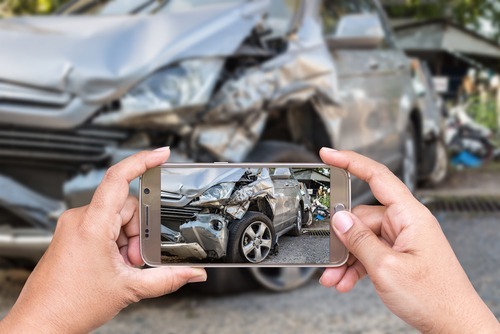 Photos of the accident scene and the damage to all vehicles involved in the crash are the best way to prove property damage.

Drivers who not carry a cell phone capable of taking photos may want to keep an inexpensive digital or disposable camera in their vehicle.

Even if photos cannot be taken immediately (for instance, due to injury or traffic concerns) it is still a good idea to return to the location and take photos later. Such photos can help an insurance adjuster understand what happened.

It is also important to get the names and contact information of any witnesses. But do not discuss the accident with them and under no circumstances admit fault or even apologize (which can be misconstrued as an admission of fault).

Drivers should also write down everything they can about the accident as soon as possible, including:

6. How does an insurer determine who was at fault?

Adjustors for each party involved in the accident will independently examine all the available evidence, including:

Each insurer will then issue a preliminary finding of fault. Remember, however, that this determination is not final and may even be wrong.

An experienced California accident lawyer can present the evidence to the insurer in the most favorable light and sometimes get the adjuster to reconsider it.

This is important since California's comparative fault law allows blame for an accident to be apportioned between two or more parties.

This means you may be entitled to partial recovery for your losses even if you were partially to blame for a car accident in California.

7. What if the repairs cost more than the estimate?

Once a garage gives you a repair estimate they must honor it. However, sometimes after beginning work, a repair shop may discover additional damage to your vehicle.

If the shop was approved by the insurer paying for the repairs, the insurer should be able to resolve the issue.

If you choose to use a repair shop that is not in the insurer's network, you will have to:

A lawyer can help with these negotiations so that you don't end up paying for repairs yourself.

While there is no strict formula in California, a vehicle is usually considered a "total loss vehicle" if the cost to repair it exceeds the car's actual cash value.

If your vehicle is "totaled,” the insurer may offer to find you a similar car to replace yours. More likely, they will offer to pay you the car's fair market value (up to your policy limit) minus any applicable deductible.

You do not need to actually purchase a replacement vehicle with the money. You can use it however you want.

You may need to haggle with the insurer or file an appeal to get them to agree to a reasonable “fair market value.” Showing articles saying the car is a classic or having receipts for aftermarket equipment that increases the vehicle's value may help.

In any case, you are legally entitled to know how the insurer arrived at the cash settlement value.

An experienced California accident lawyer can often help persuade the insurer to value your car for more than they otherwise would or appeal the decision on your behalf.

Involved in a car accident in California? Call us for help…

If you were in a motor vehicle accident, our experienced California car accident lawyers may be able to help you recover compensation.

Call us at (855) LAWFIRM or fill out the form on this page to schedule a time to discuss your case with one of our knowledgeable California injury lawyers. We can also help you get money for car repair bills if your vehicle was damaged in Nevada and get compensation for car repair bills after a Colorado auto accident.