What are Nevada laws for concealed carry in a casino?

Nevada law permits the concealed carry of firearms (NRS 202.350) in casinos. However, casino staff may legally ask gun-carriers to leave the property. People that refuse to leave could then face misdemeanor charges for trespass (NRS 207.200). The penalties include up to six (6) months in jail, and/or up to $1,000 in fines.

In sum, the concealed (or open) carry of guns in casinos is no crime. Even signs that say "no guns allowed" carry no legal weight. But as private institutions, casinos can order patrons to leave for having guns. Not leaving when asked to - or coming back after having being told to leave - is the crime.

Can casinos search people for guns?

This is a grey area. Casino security are not police. So they are not bound by the Fourth Amendment "reasonable search and seizure" restrictions.

Casinos often set up scanners outside special events such as concerts, sports matches, or carnivals. And people who do not wish to be scanned can simply leave the event.

Some casinos are also experimenting with microwave radar technology. Gun sensors are set up near entrances. And then casino staff can turn people away who show up on the radar.

Are CCW permits required for conceal carry in Nevada?

It is always illegal to carry concealed long guns (rifles and shotguns). 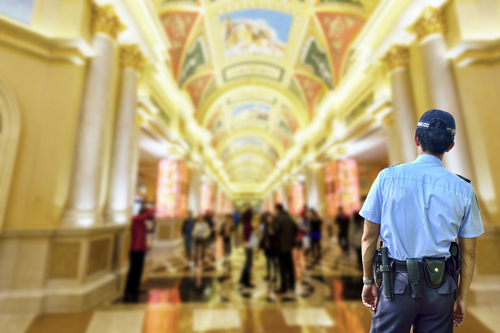 Casinos can ask people to leave for carrying firearms. It does not matter whether they are concealed or open.

Can non-Nevadans conceal carry in Nevada?

Only if they have a current and valid CCW permit from either:

When are handguns concealed?

Handguns are "concealed" whenever they are not readily visible to others. Handguns are concealed when people carry them:

Even openly carrying a gun on a belt hostler becomes "concealed carry" if a jacket covers it from view.

Where is concealed carry prohibited?

It is generally not permitted to conceal carry in the following locations:

In some cases, people may be able to conceal carry with written permission from the owner or manager.

It is a misdemeanor to carry concealed in a prohibited public building under NRS 202.3673. The punishment includes:

What is the penalty for carrying concealed without a permit?

It is a category C felony in Nevada, carrying:

People who simply forget to bring their CCW permit with them face just a $25 civil fine under NRS 202.3667.