Police officers have an easier time proving a work injury for certain health conditions or catastrophic injuries when filing a workers' compensation case in Nevada.

There is a presumption that an illness is work-related when a police officer is diagnosed with the following:

A police officer can also be diagnosed with one of the above conditions after his or her employment ends and still obtain Nevada workers' compensation benefits.

A police officer is entitled to all workers compensation benefits if he or she is diagnosed with one of these conditions. Benefits include

In this article, our Las Vegas Nevada workplace injury lawyers will explain about: 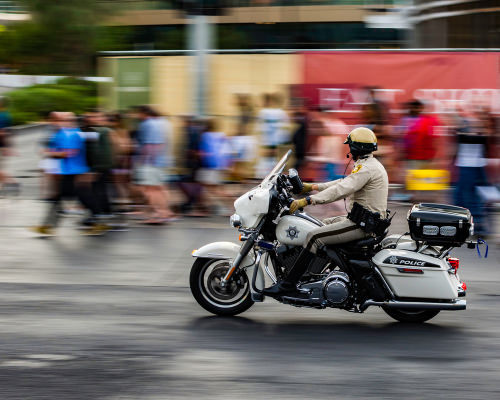 Police officers have an easier time proving a work injury for certain health conditions than other injured workers under Nevada workers' compensation laws.

Police officers exposed to contagious diseases on the job are required to create a report of the exposure.1 With such a report it is presumed that the injury came from work.2 If the insurance company disputes the work injury, it must show by a preponderance of the evidence that the injury is not related to employment.3

A police officer exposed to a contagious disease is entitled to preventative benefits as a precautionary measure.4

A police officer that tests positive for tuberculosis is entitled to Nevada workers' compensation benefits.5

A police officer will be tested for hepatitis upon employment and every year thereafter, paid by the employer.8

It is conclusively presumed that Hepatitis came from work if a police officer has been employed for at least five years in that position.11

Example: Diana is a sheriff deputy. She is stuck with a needle while at work. She files a report.

Later she tests positive for hepatitis. This is considered a work injury under Nevada law.

If a police officer that has been employed for at least two years and develops heart disease, it is conclusively presumed that the heart disease came from employment if it is diagnosed and disabling in some way.

The conclusive presumption does not apply to a former police officer if he or she:

Example: Doug was a police officer for 12 years. After being retired for six years, he experiences chest pains. He is diagnosed with heart disease and requires surgery.

Because Doug was a police officer and his condition is disabling within 12 years of the end of his employment, it is considered a work injury.

If a police officer that has been employed for at least two years and develops lung disease, it is conclusively presumed that the lung disease came from employment if it is diagnosed and disabling in some way.

A police officer shall submit to an exam of the lungs upon employment, every two years thereafter until age 40, and every year after that.16 The exam is paid for by the employer.17

Example: Herman retired from the police force after 22 years. He is diagnosed with lung cancer 15 years later.

This is considered a work injury because Herman is covered for lung diseases for the rest of his life.

2. Who is a police officer under Nevada workers' compensation law?

Example: Doris is a dispatcher at the sheriff's office and has worked there for five years. She develops a heart condition and needs bypass surgery.

Doris does not get the presumption that her heart condition is work-related because she is not considered a police officer.

Recognition of police officer risks on the job

The Nevada workers' compensation laws make it easier for a police officer to claim benefits.

There is a recognition that police officers take risks on the job and deserve an easier road to obtaining benefits.

All police officers should be aware of these added benefits and obtain the treatment and financial benefits he or she deserves.

Call us for help at 702-DEFENSE