Every person who shall willfully or maliciously destroy or injure any real or personal property of another, for the destruction or injury of which no special punishment is otherwise specially prescribed, shall be guilty of a public offense proportionate to the value of the property affected or the loss resulting from such offense.

NRS 206.310 applies to injury of both public and private property. It does not matter whether the property is real estate, vehicles, or personal belongings. Depending on the extent of the damage, malicious destruction of property may carry the following penalties:

But a Nevada plea bargain could result in vandalism charges being reduced or dismissed. Three common defenses to charges of NRS 206.310 violations are:

In this article, our Las Vegas criminal defense attorneys discuss Nevada's vandalism laws under NRS 206.310. Click on a topic to jump to that section: 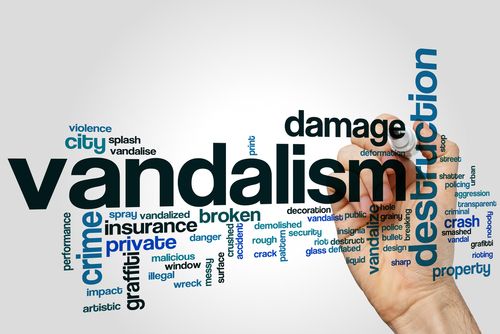 Another name for vandalism under NRS 206.310 is "malicious mischief".

Nevada's legal definition of “malicious destruction of property” is to destroy or injure another's property. NRS 206.310 is a "catch-all" crime that comprises all acts of vandalism not specifically prohibited by other vandalism statutes.1

Malicious mischief is an extremely broad offense. Just some common examples of vandalism include:

Note that Nevada vandalism suspects often face related criminal charges as well depending on the circumstances. For example, a person who allegedly breaks down a door and goes inside to steal a computer would face charges for both the Nevada crime of burglary (NRS 205.060) as well as vandalism (for breaking down the door).

Is a crime in Nevada merely to enter another person's property with the intent to vandalize.3 And it does not matter whether any destruction ever occurs. Laughlin criminal defense attorney Michael Becker illustrates how NRS 206.040 works:

Example: Jeff and Jason are neighbors in Laughlin. Jeff plans to get back at him by throwing eggs at his house. Jeff takes a basket of eggs and crosses over to Jason's property. Jeff takes an egg and readies his arm to pitch it at the front door. But before Jeff can throw anything, Jason spots him and yells at him to get off his land. Jason then calls the police, who arrest Jeff and book him at the Tucker Holding Facility for entering property with intent to vandalize.

Jeff in the above example could be convicted because he entered another's property with the intent to deface. It is irrelevant that Jason stopped him before he could do any damage. All Nevada courts care about is Jeff's state of mind when entering Jason's land.

The struggling housing market of 2008 prompted the Nevada Legislature to pass a law specifically prohibiting the vandalism of foreclosed properties. A person may be convicted of violating NRS 206.045 if all the following five conditions are true:

In short, it is illegal for inhabitants of property being foreclosed upon to vandalize that property if 1) they intend to defraud the mortgagee, and 2) the vandalism causes the mortgagee to lose money. Searchlight criminal defense attorney Neil Shouse illustrates this law with an example:

Example: Harry gets fired from his job in Henderson. His mortgagee Bank of America (BOA) begins foreclosure proceedings on Harry's house because he has missed several mortgage payments. Angry at Bank of America, Harry breaks all the kitchen and bathroom appliances. After the house is ultimately foreclosed upon, Bank of America sells it at a great loss due to the destroyed appliances. Henderson Police then arrest Harry and book him at the Henderson Detention Center for vandalizing the house with intent to defraud the mortgagee.

Harry in the above example may be convicted of breaking NRS 206.045 if the D.A. can prove that he intended to defraud BOA. Note that it would not matter if Harry did not personally own the home…anyone who occupies property facing foreclosure may be convicted of this crime.

The best way to fight Nevada charges of violating NRS 206.310 turns on the specific circumstances of the case. But in general, common defenses to malicious destruction of property include:

No malicious mischief occurred in Nevada if the property's owner gave the defendant permission to damage it.5 If the defense attorney can show that the defendant reasonably believed he/she had the owner's approval, the vandalism charges should be dropped.

Helpful evidence to show consent would be written communications between the defendant and property owner as well as eyewitnesses who heard the owner giving consent.

2.2. Behavior was not willful

Nevada vandalism laws under NRS 206.310 are not meant to punish people for honest accidents or for defacing property out of necessity or emergency, such as during a natural disaster.6 Mesquite criminal defense attorney Neil Shouse gives an example:

Example: Sally is taking a walk near her home in Mesquite. Suddenly a flash flood comes, and she climbs over a neighbor's fence and climbs a tree until the flood passes. But in the process of climbing the fence, she damages several of the pickets. Afterward the neighbors call the Mesquite Police, who arrest Sally and book her at the Mesquite Detention Center for vandalism (as well as the Nevada crime of trespass under NRS 207.200).

In the above example, Sally acted neither willfully nor maliciously. She faced a dire situation that threatened her life. Therefore Sally acted reasonably by climbing the fence in order to take cover even if it resulted in property damage. Sally will probably be found not guilty of any criminal charges in Nevada.

2.3. The police arrested the wrong person

Vandals typically come out at night and act quickly, and many wear obscuring clothes such as face masks. Therefore it is often very difficult for eyewitnesses (if any) to recognize who committed the vandalism. And this leads to false arrests and misidentifications during criminal line-ups.

If the prosecutor cannot prove beyond a reasonable doubt that the defendant is the person who caused the damage, then the NRS 206.310 charge should be dismissed. Typical evidence in these cases include:

Nevada judges determine a vandalism sentence based on various factors including:

Note that many alleged NRS 206.310 violations often involve gang members. Defendants who vandalize for the benefit of a gang can get their jail or prison sentenced potentially doubled.7 Learn more about criminal gang enhancements in Nevada.

Penalties for vandalizing property in violation of NRS 206.310 can carry just a small fine or several years in Nevada State Prison depending on the case:8

3.2. Penalties to other vandalism crimes

Nevada has more than a dozen vandalism crimes, each with its own criminal sentences:

4. Vandalism as a deportable offense

Non-citizens who are in the U.S. legally usually do not face deportation for a misdemeanor vandalism offense.

Vandalism is not usually a deportable offense in Nevada, but immigration law is constantly evolving under the current administration. Any criminal charge looks bad on a non-citizen's record, especially if he/she is hoping to obtain citizenship eventually.

Aliens charged with a crime in Nevada are encouraged to seek legal counsel right away in an attempt to get the charges dismissed or changed to charges that are definitely non-deportable. Learn more about the criminal defense of immigrants in Nevada.

The waiting period to seal a vandalism conviction in Nevada depends on what category of crime the conviction was for:

If you have been charged with “malicious mischief” or vandalism in Nevada, call our Las Vegas criminal defense attorneys at 702-DEFENSE (702-333-3673) for a free phone consultation. We may be able to persuade the prosecution to reduce the charges or to drop them altogether so your record stays clean.