Running a stop sign in Las Vegas carries a $395 fine as well as four (4) Nevada demerit points on the person's Nevada driver's license. But in the majority of cases, the judge may reduce the charge to a "non-moving" violation with no demerit points.

Violating NRS 484B.257 may be a minor crime in Nevada, but courts may issue bench warrants to people who ignore their traffic tickets. Having a bench warrant means that the person can be arrested at any time and faces extra fines.

In this article our Las Vegas traffic ticket attorneys answer frequently-asked-questions about the failure to obey stop signs in Clark County and throughout Nevada. We delve into such issue as defenses, punishments, demerit points, record seals, and other relevant information. Click on a topic below to jump directly to that section:

If you have been injured by a car that failed to stop, you may be entitled to hefty money damages. Contact our Las Vegas personal injury attorneys to learn more. 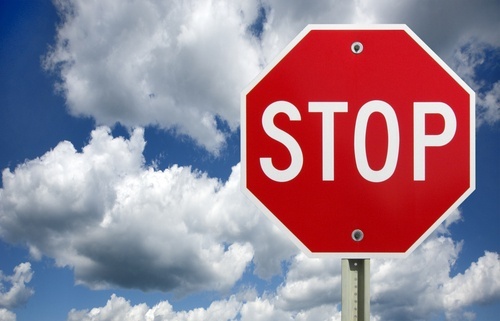 Failure to obey a stop sign is a misdemeanor in Nevada.

1. Is running a stop sign illegal in Las Vegas, Nevada?

Yes. Drivers approaching the sign are required to come to a complete standstill before continuing to drive. The only exception is if a police officer is patrolling the intersection and directing traffic.

2. How do I fight charges for disobeying a stop sign in Las Vegas, Nevada?

Most cases can be resolved in the defendant's favor without much litigation. Otherwise, it may be possible to fight the case on the merits with the following evidence (if available): 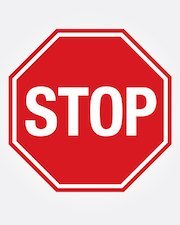 Sometimes traffic cases have no evidence other than the police report. As long as the prosecutor cannot show beyond a reasonable doubt that the defendant ignored the sign, the defendant should not be convicted.

3. What are the penalties for running a stop sign in Las Vegas, Nevada?

It varies by location, but the fine for failing to obey the sign is $395 in the city of Las Vegas. And the amount is doubled if work zones or pedestrian safety zones.

Violating NRS 484B.257 is treated as a misdemeanor offense in Nevada. This is different from California, which classifies it as an "infraction." Nevada misdemeanors carry a maximum punishment of up to $1,000 in fines and/or up to six (6) months in jail. But judges hardly ever impose jail on a traffic ticket violation unless there are extenuating circumstances.2

In practice, Nevada courts are amenable to reducing traffic tickets for moving violations (such as not obeying a traffic sign) to non-moving violations, which have a lesser sentence. Scroll down to learn more...

4. Can I get a traffic charge reduced to a non-moving violation in Las Vegas, Nevada?

Unless the defendant has a long history of traffic offenses, usually yes. Unlike many moving violations, non-moving violations carry no demerit points on the person's driver's license.

5. How many points will disobeying a stop sign put on my driver's license in Las Vegas, Nevada?

In Nevada, a person's driver's license gets suspended for six (6) months if he/she accrues twelve (12) or more demerit points in a year period. The best way to avoid getting demerit points is to get traffic tickets lessened to a non-moving violation.3

If a person does find him/his driver's license suspended in Nevada, he/she can demand a Nevada DMV hearing to contest the suspension. It is similar to a trial, and it is advised that the driver hire private counsel to appear at the hearing.4

Note that driving with a suspended license is a misdemeanor in Nevada. The penalty is up to six (6) months in jail and/or up to $1,000 in fines.

Most moving violations will cause a person's insurance premiums to increase, sometimes by hundreds of dollars. That is why it is so vital to hire counsel to try to get the charge reduced to a non-moving violation.

Not usually. But there are benefits to doing traffic school...

Completing Level 1 Nevada Traffic school within five (5) days of pleading guilty to disobeying a stop sign usually causes the charge to be reduced to a non-moving violation. Therefore, the DMV will not add any demerit points to the person's license.5 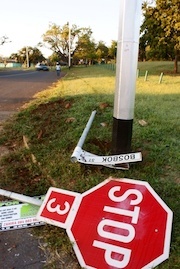 Defendants with bench warrants risk getting arrested. And the Nevada DMV may suspend the person's driver's license.

Bench warrants for traffic tickets can usually be recalled ("quashed"), but it is advised that an attorney file the "motion to quash" and appear in court on the person's behalf. Otherwise, the defendant risks arrest if he/she shows up to court and the judge opts not to quash the warrant.

Note that the judge who quashes the warrant has the power to issue an "FTA clearance" that would allow the DMV to reinstate the license.6

9. How will my commercial driver's license be affected?

Commercial driver's license holders have a duty to notify their employer within thirty (30) days of getting a traffic ticket, irrespective of the vehicle they were driving at the time.7

11. When can I get a conviction for running a stop sign sealed in Nevada?

Most traffic violations are not deportable offenses. But in these uncertain political times, non-citizens charged with any offense are strongly advised to hire private counsel to handle their case. Learn more about the criminal defense of immigrants in Nevada.

13. Should I fight my traffic citation or just pay the fine?

Fight the charge. In most cases, the prosecutor is willing to lower a traffic ticket to a non-moving violation. And this way, the defendant receives no demerit points and comes out with a cleaner criminal record. 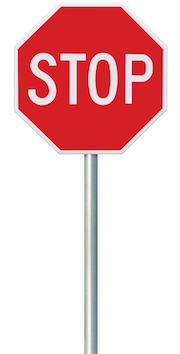 It is highly recommended that anyone charged with a traffic violation hire experienced counsel to represent them. The D.A. tends to offer better deals to defendants with lawyers. Defense lawyers are skilled in getting charge reductions and dismissals. And defendants with defense attorneys do not have to go to court, which is a huge benefit for people who live out-of-state or who work.

Since there are so many traffic citations issued under the jurisdiction of Las Vegas Justice Court, the court holds biweekly "attorney sessions" on Tuesdays and Thursdays where prosecutors and defense attorneys can negotiate traffic ticket cases. This way, defendants who retain a lawyer can normally get the case resolved within a few days.

If you have been cited for a traffic violation in Clark County or elsewhere in Nevada, phone our Las Vegas criminal defense attorneys at 702-DEFENSE (702-333-3673) for a FREE consult. In most cases we are successful in getting the charge knocked down to a non-moving violation or full dismissal, sparing you high fines, demerit points, and traffic school. If you received a ticket in California, please see our page on Vehicle Code 22450: failure to stop for a stop sign in California.

If you were injured by someone ignoring a traffic sign in Nevada, you may be able to recover money for your medical bills, pain and suffering, and lost wages. Whether or not you were partly to blame for the incident, our Las Vegas car accident attorneys will fight to get you the highest financial reward possible.