NRS 484B.157 is the Nevada traffic law requiring child restraint seats. This section requires child restraints for passengers in a motor vehicle who are:

A first-time offense of failing to properly secure a child passenger is a misdemeanor in Nevada, carrying:

However, defendants can avoid these penalties by completing a child safety course within 60 days of the sentencing hearing. There is also no Nevada driver's license demerit point penalties for failing to use a car seat.

Common defenses to charges of violating NRS 484B.157 include:

Whenever a person gets a traffic citation, he/she is advised to handle it right away either by hiring an attorney to fight it or by paying the fine. If the defendant does nothing, then it is only a matter of time before a judge issues a Nevada bench warrant for his/her arrest. 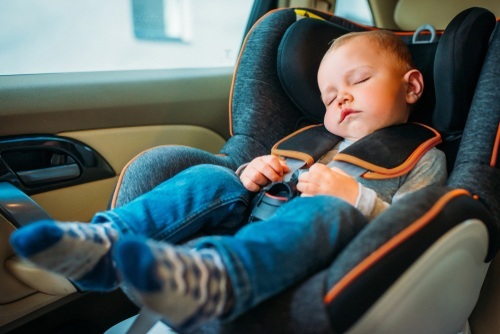 Transporting a child without a proper car seat is a crime in Nevada.

Nevada drivers are required to use a "child restraint system" approved by the United States Department of Transportation when transporting a child who is:

Note that car seats are not legally required on public transportation, such as:

Also, note that car seats are not legally required when a doctor believes it would be impractical or dangerous for a particular child due to a physical or medical condition. In these situations, the driver would need to keep a signed statement from the physician in the vehicle.1

The facts of each individual case determine which defense strategy could work best in fighting the charges. Common defenses to NRS 484B.157 allegations are: 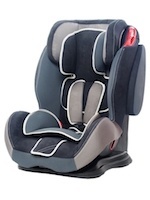 Children age 6 and older do not have to use car seats, but they must use seat belts.

Note that the defense attorney and D.A. can often come to a favorable plea deal in these types of minor traffic matters without extensive litigation.

Some children look younger than they are or weigh more than they appear. And this may cause police to wrongly cite drivers for failing to secure their child in a child restraint. But the prosecutor should dismiss the charges once the driver presents evidence of the child's age or weight, including:

Note that children older than age 5 or who weigh more than 60 pounds are still required to wear regulation seat belts like adults are. Learn more about Nevada seat belt laws.

2.2. The child was medically excused from using a car seat

Not all children under 6 years old and weighing 60 pounds or less are suited for car seats. Some conditions that may make child restraints impracticable include:

Parents (or other adults) who are driving children are supposed to keep with them a doctor's note explaining that the child is medically exempt from car seat regulations.2 But if they forget to carry the note and police cite them for a car seat violation, prosecutors may be willing to drop the case if they can later produce the doctor's note. 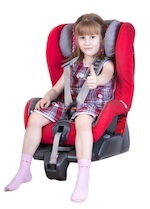 Some parents are falsely accused of not using a car seat.

Parents know that self-proclaimed good Samaritans are quick to call the authorities about alleged child neglect without any verification. And sometimes ex-spouses or ex-partners falsely accuse the other of child neglect out of revenge or anger.

If a person gets wrongly cited for not properly securing a child while driving, the defense attorney would try to find eyewitnesses or surveillance video to show that no law was broken. The attorney may also try to show angry text messages or voicemails by the accuser to demonstrate a motivation to lie. As long as the prosecutor has insufficient evidence to prove guilt beyond a reasonable doubt, the criminal charges cannot stand.

The penalties for violating NRS 484B.157 get harsher with each successive conviction.

In the City of Las Vegas, the fine for a first-time offense is $205.3 Note that child restraint classes are usually done in person and not online.4

It may be possible to get an NRS 484B.157 allegation totally dismissed. There are various arguments a criminal defense attorney can make in an attempt to persuade the prosecutor that the charge is baseless (see section 2 above). And if the prosecutor realizes the state lacks sufficient evidence to demonstrate guilt beyond a reasonable doubt, the prosecutor may drop the entire case.

Note that the chances of getting a case dismissed are usually higher if the defendant is represented by counsel. Criminal defense attorneys are skilled in evidence collection, investigation, and negotiation. And prosecutors tend to take defendants more seriously if they have a lawyer. 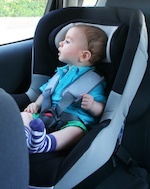 Violating NRS 484B.157 carries no demerit points in Nevada.

Improperly securing a child in a car is a non-moving violation in Nevada.5 Therefore, the Nevada DMV will not penalize the driver by adding driver's license demerit points.

Recall from section 3 above that a third-time offense of not using a proper restraint system for a child passenger carries a mandatory driver's license suspension period of 30 to 180 days. Defendants can contest these suspensions at a DMV hearing, which is similar to a trial.6

Even though Nevada law classifies child seat offenses as non-moving violations, some car insurance companies will still increase people's premium rates following a conviction. Therefore, defendants should read their insurance policies to determine whether a ticket for improper child restraints will result in higher rates.

The punishment for "forgetting" to pay a traffic ticket is far worse than the original fine. Once a 30-day grace period passes after missing the deadline to pay the fine or appear in court, the judge will issue a bench warrant. That means the defendant can be arrested at any time and held in custody pending the next court appearance.

Note that defendants who are late on a fine can usually do community service instead. But then if they fail to complete the service, they will get a bench warrant.

Once defendants learn they have a bench warrant, they are advised to hire an attorney to try to get the warrant "quashed" (recalled). The attorney would then file a motion and schedule a hearing to try to convince the judge to drop the warrant.

More often than not, judges agree to recall defendants' bench warrants if they do not have a history of missing court. Once the bench warrant is gone, the defendant is no longer at constant risk of getting arrested.8

As discussed above in section 5, there is no DMV penalty for using an improper child restraint system. This is true for both commercial and non-commercial driver's licenses.

Every state's DMV operates differently. Violating NRS 484B.157 carries no demerit point penalties in Nevada, but that does not guarantee that non-Nevadans will avoid any penalties from their home state DMV.

Therefore, non-Nevada residents who get a traffic ticket in Nevada should always consult with a local attorney in their home state to see if their Nevada traffic case could affect their driver's license.

11. Sealing convictions for failing to properly secure a child in a vehicle in Nevada 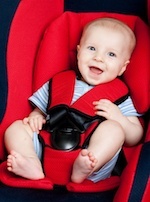 Defendants convicted of violating NRS 484B.157 must wait a full year after the case ends in order to petition the applicable court to seal the criminal record.9 But there is no waiting period to seek a record seal if the charge gets dismissed.10

One advantage of getting a record seal is that it looks good to prospective employers. And you can legally deny ever having been charged with or convicted of violating NRS 484B.157 when asked, even under oath. Learn more about sealing criminal records in Nevada.

Failing to use a proper car seat does not qualify as a deportable offense in Nevada. However, people facing the separate charge of child abuse or neglect in Nevada are at risk of removal. Learn more about the criminal defense of immigrants in Nevada.

Having a conviction for failing to properly secure a child does not look good on one's background check. Therefore, it is recommended that defendants fight the charge in an attempt to get it dismissed or change to something the carries less of a stigma.

By fighting the charge instead of just paying the original fine, the defendant has everything to gain and nothing to lose.

It is unusual for Nevada courts to see a traffic ticket trial because most cases settle through negotiation, but defendants are certainly entitled to trials. Anyone charged with violating NRS 484B.157 may request a Nevada bench trial, where the judge -- and not a jury -- decides the verdict.11

Hiring a skilled criminal defense attorney is always recommended for these three reasons:

The requirement to properly secure small children in vehicles extends not only to parents but also to: 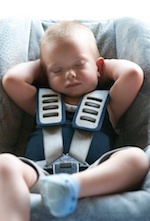 People accused of failing to use car seats may face both civil and criminal prosecution.

If any of the aforementioned people did not properly strap in a child in a car, they could be liable for negligence per se if the child then gets injured. In order to win a negligence per se case, Plaintiffs (child victims and their parents) would need to prove the following elements:

It is usually easier to win a "negligence per se" lawsuit than just a regular negligence lawsuit: This is because in a negligence per se lawsuit, the judge can presume the defendant was breaching his/her duty. The plaintiff's main obligation is to show that the defendant's negligent behavior was the cause of any injuries.

However, note that if a person gets convicted of violating NRS 484B.157, this conviction does not automatically make him/her liable for negligence in a personal injury lawsuit. Criminal court is entirely separate from civil court with different procedures, evidentiary rules, and penalties.13

Irrespective of whether a personal injury case resolves with or without a trial, our Las Vegas car accident attorneys pursue the highest possible financial rewards to pay for:

People convicted of the Nevada traffic offense of speeding in a school zone face double penalties. For example, a speeding ticket that typically carries a $205 fine would double to a $410 fine in a school zone.

The Nevada traffic offense of not stopping for a school crossing guard is charged as reckless driving in Nevada when the driver hits a pedestrian or cyclist. If the victim was seriously injured, the court may hand down one to six (1 - 6) years in Nevada State Prison and up to $5,000 in fines.

The Nevada traffic offense of disobeying a traffic officer carries a $305 fine in Las Vegas and four (4) driver's license demerit points. Traffic convictions have to remain on a defendant's criminal record for a full year before the court may seal the record.

Were you cited for failing to use a car seat in Clark County or elsewhere in Nevada? Our Las Vegas criminal defense attorneys at 702-DEFENSE (702-333-3673) may be able to get the charge dismissed. Contact us for a FREE consultation. For cases in California, please see our page on Vehicle Code 27360 - California requirements for child restraint systems for children traveling in motor vehicles.