Driving in a carpool lane (a.k.a. "HOV" lane) with no other passengers is against Nevada law unless:

The typical fine for violating NRS 484B.323 in Las Vegas is $352, and it carries four (4) Nevada demerit points on the person's driver's license. But most carpool charges can be reduced to a non-moving violation, which carries no demerit points.

People who do not pay their traffic fines or skip out on court risk getting bench warrant and having their license suspended. So people who get cited are encouraged to retain legal counsel to handle their ticket and to try to get the charge reduced or dismissed.

In this article, our Las Vegas traffic ticket attorneys answer frequently-asked-questions about carpool laws in Clark County and throughout Nevada, including how to fight the charge, possible punishments, record seal wait times, and license suspensions.

Click on a carpool topic below to jump to that section:

If you have been injured by a vehicle that was driving illegally in a carpool lane, you may be entitled to substantial money damages. Contact our Las Vegas personal injury attorneys to learn more. 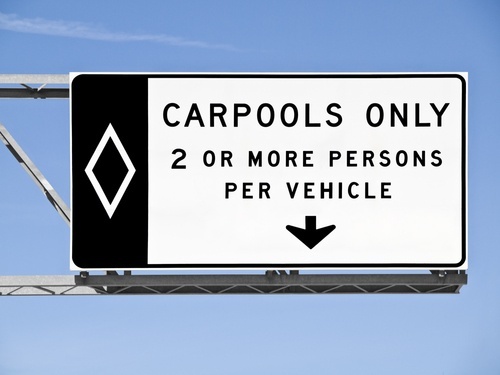 Generally, driving in a carpool lane with no other passengers is illegal in Nevada.

1. When can I drive in the carpool lane in Nevada?

Driving in a designated carpool lane is legal in Nevada if:

Vehicles with only one occupant may drive in carpool lanes outside of designated hours. In Las Vegas, the hours of operation for HOV lanes is Monday through Friday, from 5 a.m. to 10 a.m. and 2 p.m. to 7 p.m. Outside of these two five-hour windows, anyone may drive in the carpool lane.2

Unless otherwise indicated, the speed limit on US 95 in Las Vegas is only 65 mph. The Nevada Highway Patrol is on high alert for the many drivers who mistakenly believe HOV lanes have higher speed limits than the rest of the highway.

Note that HOV lanes are different from express lines, like the ones on the Interstate 15 south of Sahara Avenue. Express lanes are separated from other traffic by a double white line, and they are meant to segregate motorists traveling long distances and those exiting along the 15.3

2. How do I fight charges for driving in the carpool lane in Las Vegas, Nevada?

Common defenses to carpool violation charges in Nevada are:

Typical evidence in carpool violation cases includes surveillance video, eye-witnesses and GPS records, if they exist. If the prosecution does not have a strong enough case to prove guilt beyond a reasonable doubt, the D.A. may agree to drop the charges.

3. What are the penalties for driving in the carpool lane in Las Vegas, Nevada?

Wrongly driving in the carpool lane in Nevada is a misdemeanor carrying at least a $250 fine. In the city of Las Vegas, the fine is $352.4 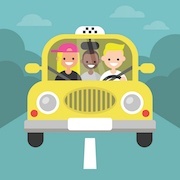 4. Can I get a carpool charge reduced to a non-moving violation in Las Vegas, Nevada?

5. How many points will a carpool charge put on my driver's license in Nevada?

Driving illegally in an HOV lane in Nevada carries four (4) demerit points. A demerit point remains on a person Nevada driver's licenses for one (1) year. If a person gets twelve (12) or more demerit points in a year, the Nevada DMV will suspend the license for six (6) months.5

If a person gets his/her driver's license suspended in Nevada for having twelve (12) or more demerit points, he/she may request a DMV hearing to fight the suspension. But it is recommended they hire an attorney to represent them.6

Note that driving with a suspended license is a misdemeanor in Nevada, carrying up to six (6) months in jail and/or up to $1,000 in fines.

6. Will driving in the carpool lane affect my auto insurance in Nevada?

It depends on the insurance company, but probably. That is another reason it is so important to try to get the charge reduced to a non-moving violation.

7. Do I have to do traffic school if I get cited for a carpool violation in Las Vegas, Nevada?

Not usually. In most HOV cases, the court imposes just a fine in exchange for a guilty plea. However, doing traffic school has various pros...

People who do Level 1 Nevada Traffic school within five (5) days of pleading guilty to a carpool violation can often get the charge reduced to non-moving violation. Then the DMV will not tack on any demerit points to their license.7

8. What happens if I ignore my carpool ticket in Nevada?

People with bench warrants risk arrest if they ever get pulled over and the police run a warrant check. Additionally, the Nevada DMV will suspend people's driver's licenses if they "fail to appear" (FTA) at court or fail to pay their fines.

Defense attorneys are skilled in asking judges to recall ("quash") bench warrants and to resume the traffic case. Judges can also issue an "FTA clearance," which is necessary for the DMV to reinstate a license that has been suspended for missing a court appearance.8

9. How will a carpool violation affect my commercial driver's license in Nevada? 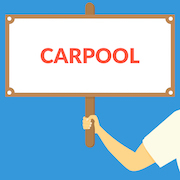 An HOV conviction will result in four (4) demerit points being added to the person's commercial driver's license (CDL) in Nevada. If the total number of demerit points on a license reaches twelve (12) in a year period, the DMV will suspend the license for six (6) months.

Note that people with commercial driver's licenses have to tell their employer about any traffic violations within thirty (30) days of the incident. It makes no difference whether or not they were driving a commercial car at the time.9

10. What happens to my out-of-state license if I get a Nevada carpool violation?

The Nevada DMV usually provides its citation information to other states' DMV. Consequently, the drivers' home state DMV can impose their own demerit penalties on them for an HOV violation.

11. When can I get a Nevada carpool conviction sealed?

Note that there is no waiting period to get a seal if the carpool charge gets dismissed (which means there is no conviction).11

12. Will I get deported for a carpool violation?

No. Driving wrongfully in a carpool lane is not a deportable offense. But any alien facing criminal charges is advised to hire legal counsel to help ensure that they do not have to leave the country. Learn more about the criminal defense of immigrants in Nevada. Note that illegal aliens may be removed at any time.

13. Should I fight the carpool ticket or just pay the fine?

Everyone slapped with a traffic ticket in Nevada is encouraged to fight the case. Most judges reduce carpool charges to non-moving violations, which look better on criminal records, have no insurance consequences, and carry zero demerit points.

14. Can I go to trial for a carpool case in Nevada?

Traffic ticket trials hardly ever happen because the prosecutor usually agrees to reduce the charges. Still, all defendants have the right to go to trial to contest a traffic citation...

But because a carpool violation is just a misdemeanor in Nevada, defendants are entitled only to a bench trial (where the judge decides the case) and not a jury trial.

No, but it is highly recommended that traffic defendants hire an attorney. Lawyers usually get better results than defendants who try to negotiate their tickets without legal representation.

In Las Vegas Justice Court, prosecutors and defense attorneys negotiate traffic tickets every Tuesday and Thursday. Since these attorney sessions occur so frequently, people who hire an attorney to handle their Las Vegas traffic tickets can usually have the matter resolved within the week if not sooner.

If you have been cited for driving in an HOV lane in Clark County or elsewhere in Nevada, call our Las Vegas criminal defense attorneys at 702-DEFENSE (702-333-3673) for a FREE consultation. We may be able to get the charge reduced to a non-moving violation or dismissed outright with no demerit points or traffic school. For cases in California, please see our page on Vehicle Code 21655.5 - carpool violation tickets in California.

And if you were injured in a car collision, our Las Vegas car accident attorneys may be able to secure your money for your medical bills, lost income, pain and suffering, and perhaps punitive damages. You could still be entitled to a large settlement even if you were partially to blame for the accident.