Tier II is the second most serious class of sex offenders in the Nevada Sex Offender Registry under NRS 179D.115. State law requires Tier II (a.k.a. "Tier 2") offenders to register for 25 years and to personally check in with police once every 180 days.

Defendants are assigned Tier II status after being convicted of certain crimes against children, such as:

Failing to register as a sex offender in Nevada (NRS 179D.550) is a felony, carrying as much as four additional years in prison. Furthermore, Tier 2 offenders are never eligible to get off the Nevada Sex Offender Registry early.

In this article, our Las Vegas criminal defense attorneys explain the Nevada laws for Tier II offenders under NRS 179D.115: 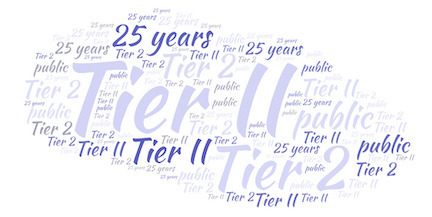 Tier 2 is the middle category of sex offender in Nevada. Defendants convicted of certain crimes against children get classified as Tier II offenders.1

Tier 2 sex offenders in Nevada are required to register for 25 years.3 And they have to personally check in with police once every 180 days.4

Furthermore, every convicted sex offender is required to do the following:

All Tier 2 offenders have the following information about them made public:

Under NRS 179D.115, Tier 2 offenses comprise any of the following if the victim is under 18 years old:

Additionally, the following two felonies are considered Tier 2 crimes unless the defendant is the victim's parent or guardian:

According to the U.S. Department of Justice's review of Nevada sex offender law, Tier 2 offenses also include:

5. Penalties for failing to register as a Tier II offender in Nevada

It is a felony in Nevada not to register as a sex offender as required:

Additionally, Tier II offenders who have not registered will be unable to get their driver's licenses renewed by the Nevada DMV.8

6. Getting off the Nevada Sex Offender Registry

There is no way for Tier 2 offenders to shorten the length of their 25-year registration requirement. Only certain Tier 1 and Tier 3 offenders may be eligible for early termination.9

If you have been charged with a crime in Nevada, phone our Las Vegas criminal defense attorneys at 702-DEFENSE (702-333-3673) for a FREE consult.

We might be able to get the case reduced to lesser crimes or dismissed fully. And if necessary, we can take your case to the jury and fight for an acquittal.