A plaintiff who is injured in a taxi accident in Las Vegas can file a lawsuit to recover compensatory damages from the taxi driver and / or the taxi company. The damages recoverable may include:

Do I need to be a passenger to recover for a taxi accident in Nevada?

As long as the taxi driver was at fault, damages are recoverable in an accident in Nevada when:

You may also wish to read our article, 10 Critical Steps to Take After a Nevada Car Accident and pedestrian knockdowns in Nevada. 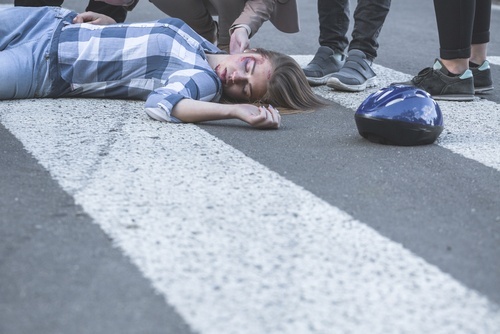 However, Chapter 706 of the Nevada Revised Statutes (NRS) sets forth additional Nevada laws governing taxi drivers and companies. Among other requirements, Nevada law requires taxi operators to conduct extensive background checks of their drivers and to maintain commercial driver liability insurance in case of accidents.

2. How much insurance must taxi companies carry in Nevada?

Under NRS 706.305 all operators of taxicabs in Nevada must maintain insurance with at least 100/300/10 limits. This means the policy of insurance must at a minimum provide:

Eligible companies meeting financial responsibility requirements may instead be permitted to self-insure,2 or to post a bond3 or security deposit4 with the Nevada Department of Motor Vehicles.

3. What accidents is a Nevada taxi company liable for?

Under Nevada's respondeat superior law, taxi companies are liable for all injuries caused by their drivers when the driver is on company time or in a company vehicle.

It does not matter whether you were a passenger in the vehicle, a driver or passenger in another vehicle, or a pedestrian at the time of the taxi accident. If the accident was caused by a Nevada taxi driver, you are entitled to recover for your injuries.

Example: Penny is taking a taxi from McCarran International Airport to a hotel on the Las Vegas strip. The driver runs a red light and gets into an accident with a truck, which then hits Quentin, a pedestrian. Penny seeks to recover damages for a spinal injury, two months of missed work, and her pain and suffering. Quentin needs to recover damages for his medical bills, as well. Because the accident was the taxi drivers fault, both Penny and Quentin can recover their damages from the taxi company.

You may also be entitled under Nevada's comparative negligence / shared fault law to recover partial compensation from the taxicab operator or its liability insurer if the taxi driver was only partially at fault for the accident.

Example: Let's say that in the example above, Quentin had been crossing in the middle of the street, rather than at the light. A jury found him 20% at fault for his injuries. Penny will still be able to recover 100% of her damages from the taxi company. But Quentin's recovery will be reduced by 20%, because that is his percentage of shared fault for the accident.

4. Am I covered if I am injured by another driver while riding in a cab?

If the taxi driver was not at fault for an accident, the taxi company is not responsible for injuries you maintain in a Nevada taxi accident.

In such a case, you will have to look to the driver of the other vehicle. Nevada law requires that drivers of non-commercial vehicles maintain at least 15/30/10 insurance.

However, if the at-fault driver is uninsured or underinsured, you will have to look to your own private health insurance or Med Pay coverage or to public insurance such as Medicare or Nevada Medicaid.

Note that taxis are not required to maintain uninsured / under-insured motorist coverage in Nevada to protect their passengers.

5. What damages can I recover in a Nevada taxi accident lawsuit?

If the taxi driver was entirely or partially at fault for an accident, you may be entitled to recover damages for:

6. Failure to conduct an adequate background check of a Nevada taxi driver

A taxi company may also be liable for an accident or injury if it violates Nevada's negligent hiring, retention or supervision law.

Nevada law requires drivers to meet certain requirements before they can legally drive for a taxi company, including:

A driver may not be employed as a taxi driver in Nevada if he or she has been convicted of:

Injured in a taxi accident in Las Vegas? Call us for help...

If you or someone you know was injured in a taxicab accident in Las Vegas or Reno, we invite you to contact one of our experienced personal injury and accident lawyers for a free consultation.

You may be entitled to sue the Nevada taxicab company for damages for compensation for medical bills, lost wages, pain and suffering and more.

See our related article on suing DUI drivers following an accident in Nevada.