However, Nevada law precludes subrogation of Med-Pay coverage. Nevada law also prohibits insurance companies from subrogation if their policyholders have not been fully reimbursed for their damages. 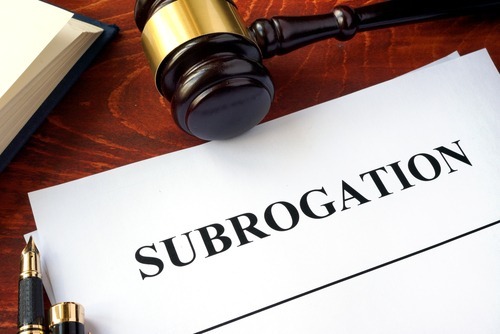 Subrogation allows insurance companies to be paid back by the person at fault.

Subrogation is a legal right that allows insurance companies to recover money it previously paid out for a loss by suing the third party responsible for that loss. In other words, subrogation is a way for an insurance company to try to get reimbursed by the outside people that caused the carrier to pay out in the first place.1

Had Jane in the above example been uninsured, she would be allowed to seek damages from Marie's insurance company. Since Jane is insured, subrogation gives her insurance company the right to "stand in the shoes" of Jane and seek the damages she is entitled to.

Note that if Jane was at fault for the accident, then her insurance company would have no right of subrogation against Marie.

Also note that subrogation is not the same as "contributions" or "liens": They are similar concepts that benefit insurance companies, but they do not permit the insurance company to "step into the shoes" of the policyholder and assume their rights.

2. Bases of a subrogation claim in Nevada 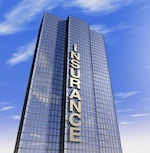 Subrogation allows insurance companies to "step into the shoes" of its policyholders and assume their rights.

There are three types of subrogation:

Common examples of contractual subrogation include collision insurance. Scroll down to section 3 for more information.

Statutory subrogation arises out of current laws that grant subrogation rights to certain parties in specific situations. Therefore, it does not depend on the terms of a contract: It extends to all insurance companies and accident victims that fit the specifications in the statute.2

A common example of statutory subrogation is workers' compensation. Scroll down to section 3 for more information.

Equitable subrogation -- also called judicial subrogation -- arises from court cases where parties do not agree on if and how subrogation is implemented. Here, the judge decides and looks to prior court precedents to determine how to resolve the case.3

3. Areas where subrogation can apply in Nevada 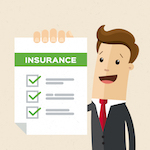 Car insurance companies enforce subrogation when their policyholders' cars are damaged by a third party.

Example: Kerry carries no car insurance. One night she loses control of her vehicle and crashes into Jeff. Since Jeff carries IM insurance, Jeff's insurance company pays all his medical bills and car repair bills. Then the insurance company sues Kerry for all the money it paid to Jeff.

Note that it makes no difference to Jeff in the above example if her insurance company is unsuccessful in getting Kerry to pay. Jeff gets to keep all the money he received through his UM claim irrespective of whether the insurance company ever gets reimbursed.

All employers are required to carry worker's compensation insurance to pay employees in the event they get injured on the job. If someone other than the injured employee caused the accident, subrogation rights permit the insurance carrier to sue the at-fault person to reimburse it.

Note that injured workers are permitted to sue the at-fault party in a civil lawsuit in addition to filing a workers comp claim. But if the injured worker then wins money in the civil lawsuit, the workers' comp carrier may have reimbursement rights to recover a portion of those winnings:6

Example: Paul delivers pizza for a living. One evening Jackie crashes into him, and Paul sustains a broken leg. Paul files a workers' comp claim, and he receives $10,000 to pay his medical bills. Paul also sues Jackie, who pays him a $20,000 settlement, part of which is meant to go towards his medical bills. Since accident victims are not allowed to receive "double recovery" for the same expenses, the employer's workers' comp carrier can try to get its $10,000 back from Paul.

Note that there are various ways that a workers' comp carrier can go about recovering money, including joining the lawsuit or filing a lien. Injured workers are advised to retain an attorney to protect their interests and ensure that workers' comp carriers are not taking back any more money than they are legally entitled to.

Some auto insurance policies provide Med-Pay coverage (short for Medical Pay), which pays a policyholder's medical bills following an accident. Nevada is one of the few states which prohibits subrogation of Med-Pay coverage:

The Nevada Supreme Court reasoned that it is a violation of public policy to let a car insurance company collect Med-Pay premiums and then deny the benefit to policyholders whenever they receive money for their injuries from other sources, such as a health insurance policy. The Court acknowledged that in many cases, accident victims' medical bills far exceed whatever money they may receive from Med-Pay and other sources.7

The risk of subrogation is that the insurance company recoups too much money, leaving policyholders with less than they are legally entitled to. The "Made Whole" doctrine and "Common Fund" doctrine help to offset these risks to policyholders.

The Made Whole doctrine prohibits insurance companies from subrogation until its policyholder has been fully reimbursed -- "made whole" -- for its losses.

Example: Helen's car sustains $30,000 in damage after Jack crashes into her car. Helen's car insurance carrier pays her $10,000 to repair the damage. Helen also receives $5,000 from Jack. Since Helen is still short of the money required to repair her car, her car insurance company cannot try to recover the money that Jack paid her.

Note that parties to a contract in Nevada are allowed to include a clause that excludes the Made Whole doctrine as a possible defense against subrogation. If Helen's insurance company in the above example had such a clause, then it may be able to recover some money from Helen.8

The reasoning behind the Common Fund doctrine is that the insurance company should help pay for the policyholder's personal injury attorney since the attorney did all the work in litigating the lawsuit and recovering damages.9

When a health insurance carrier pays money to an injured policyholder, the carrier may have a "reimbursement" provision in its policy that allows it to get that money back: This policy kicks in if the policyholder receives money from the at-fault party meant to pay for the medical bills.10

7. The statute of limitations for subrogation

In general, insurance companies have two (2) years from the date of the policyholder's injury to seek subrogation.11

Have you been injured in Nevada? Contact our Las Vegas personal injury attorneys at 702-DEFENSE (702-333-3673) for a FREE consultation. We will take every measure to win you all the compensatory and possibly punitive damages possible in your case. And most of the time, we can achieve this through a settlement and avoid trial.

In California? Read our article about California subrogation laws.