Therefore, law enforcement officers who committed police misconduct in Nevada may not be able to escape civil liability in a personal injury lawsuit if their actions were unjustifiable or not in line with their training.

People injured by a state or city employee in Nevada are never barred from bringing a personal injury lawsuit against the state or city government. In many cases, accident victims may be able to avoid a lawsuit altogether by filing a notice of claim and settling with the government. 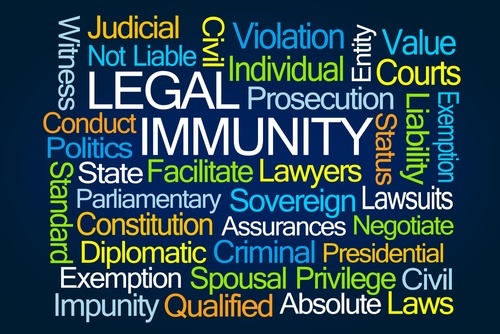 Police may be able to escape prosecution for causing an injury as long as they were acting reasonably.

Nevada courts grant government employees substantial leeway to make decisions about how to react to the varied situations they are presented with throughout the day. Even if any harm they caused was avoidable, qualified immunity should still protect them from liability as long as they were acting reasonably.

Example: A murder suspect leads police on a high-speed car chase through a Henderson neighborhood. During the chase, one of the police officers makes a wide turn in order to stay on the suspect's tail and in the process sideswipes a parked vehicle. In Nevada, qualified immunity probably would protect the police officer from property damage liability even if making a wide turn was not necessary to catch the suspect. Since the police officer was reasonably acting in the course of his duty, he should not be prosecuted for negligently causing property damage.

Police who act in bad faith are not immune from prosecution.

Example: A liberal UNLV political science professor fails a conservative student in his class solely because of his politics. If the student can show that he did not otherwise deserve to fail and that the professor acted unreasonably, then the professor cannot claim qualified immunity if the student decides to sue him.

Note that qualified immunity extends to not only public employees in Nevada but also independent contractors hired by the state or city. Therefore if the Las Vegas Metropolitan Police Department hires a phlebotomist at a private hospital to draw a DUI suspect's blood, the phlebotomist may then be able to claim qualified immunity for any injuries arising out of the blood draw.1

Government officials accused of breaking federal law can claim qualified immunity under federal law as long as they were acting reasonably in the course of their job. These cases frequently involve police officers accused of committing Section 1983 civil rights violations in Nevada.

Similar to Nevada law, federal qualified immunity laws do not protect government officials from prosecution if they acted in bad faith or were clearly unreasonable. Or as the U.S. Supreme Court stated, "qualified immunity protects all but the plainly incompetent or those who knowingly violate the law."2

Example: A LVMPD police officer is performing a traffic stop for running a red light when the suspect suddenly runs away. The suspect does not seem armed or dangerous, but the officer presumes he is dangerous because he is black and shoots him. After the suspect falls to the ground and holds up his hands in surrender, the officer lets his police dog maul the suspect. Later the suspect sues the police officer for violating his constitutional rights by using racial profiling in Nevada, unlawful deadly police force in Nevada, and unlawful use of police dogs in Nevada. The officer probably would not be able to claim qualified immunity because his actions were clearly outside the bounds of what is considered reasonable.

The law is clear that police should avoid deadly force to catch suspects who are not dangerous and to cease inflicting physical force on a suspect once he/she is subdued. In the above example, the officer acted against his training by using deadly force on a non-dangerous suspect and letting his dog harm a suspect who has already surrendered. Even if the officer genuinely felt he was doing the right thing, he should not enjoy qualified immunity protections for behaving unreasonably.3

Also learn about suing for false imprisonment in Nevada, jail and prison neglect in Nevada and unlawful police shootings in Nevada.

Sovereign Immunity is an old legal concept that the government is immune from liability simply because it is the government. Fortunately, in Nevada, sovereign immunity does not apply to state and local government in personal injury cases:

Sovereign immunity does not shield accident victims from suing city or state governments in Nevada.

Note that people injured by a government employee while the employee is off-duty usually cannot recover damages from the government.4

Depending on the case, accident victims may be able to sue for compensatory damages to cover their:

Continue scrolling down to learn specific information about suing the state of Nevada and the city of Las Vegas.

3.1 Suing the State of Nevada for personal injury

When a person gets injured by a Nevada state employee or on Nevada state property, he/she may file a personal injury lawsuit right away and/or submit a completed formal claim form to the Nevada Attorney General. The claim form is a way to avoid litigation and pursue a settlement more quickly.

The claim form asks for the following information: 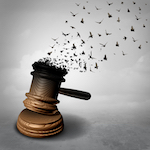 Many accident victims elect to submit a claim form against the State of Nevada in an effort to avoid a lawsuit.

The attorney general's office will then either approve the claim and pay or else deny the claim. If the claim is denied, the victim can still bring a lawsuit as long as no more than two (2) years have passed since the injury.

3.2. Suing the City of Las Vegas for personal injury

The process of bringing a personal injury lawsuit against the City of Las Vegas is similar to the process of suing the State of Nevada. Victims may either bring a lawsuit right away or try to avoid a lawsuit altogether by submitting a "notice of claim" to the City.

A notice of claim is a formal request for payment of loss, injuries, or damages that the City of Las Vegas allegedly caused. Injured parties can obtain a notice of claim form by calling Las Vegas's Risk Management Division at (702) 229-4011. Or they can go in person to the following address between 7:00 A.M. and 5:30 P.M.:

Claimants are strongly encouraged to retain an experienced attorney to complete and submit the form. The claimant should attach all supporting documentation to the form, such as:

Note that these supporting documents become public documents once the claimant submits them. Most claims are processed within six weeks.

If the City accepts liability and the parties agree to a settlement, the settlement becomes public record. If the City of Las Vegas rejects liability for the claim, the claimant can then consult with his/her attorney about going forward with a civil lawsuit against the City.

When the City of Las Vegas vehicles cause a car accident, the City's third-party insurance adjuster will offer the victim notice of claim form at the accident scene. The adjuster will also arrange for an "economy class" rental car for the victim if:

Note that the City of Las Vegas will not pay for a rental vehicle in the following three circumstances:

People whose vehicles have been damaged by a Las Vegas city employee may be able to get a rental vehicle free of charge.

Have you been injured in an accident in Nevada? Call our Las Vegas personal injury attorneys for a FREE consultation at 702-DEFENSE (702-333-3673). We may be able to win you a large settlement to cover all your expenses and more without having to go to trial.

Injured in California by a public employee? See our article on the California Torts Claim Act and overcoming qualified immunity in California civil rights cases.