Non-consensual sexual conduct that does involve penetration is prosecuted as sexual assault (rape), not lewdness.

Depending on the case, a charge of violating NRS 201.210 could be dismissed or plea bargained down to a lesser offense. Otherwise, a first offense is a gross misdemeanor. The sentence includes:

In addition, the defendant will have to register as a sex offender. However, defendants considered to be low-risk will not be placed on a public database (unless the victim -- if any -- was a child). 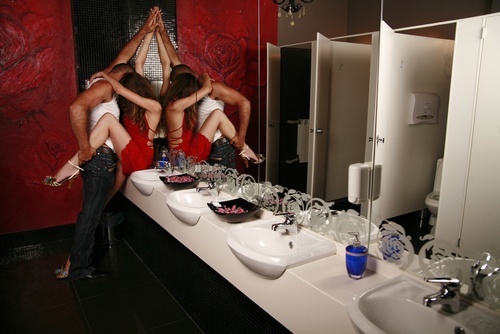 A first offense of open or gross lewdness is usually just a gross misdemeanor in Nevada, but it does carry a requirement to register as a sex offender.

1. What is the legal definition of open or gross lewdness in Nevada?

The Nevada crime of "open or gross lewdness" is extremely broad. It typically comprises either of the following two circumstances:

An NRS 201.210 violation occurs when someone behaves in a sexually explicit way where bystanders could potentially see it. Henderson criminal defense attorney Michael Becker gives an example: 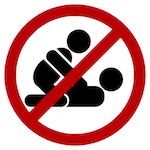 Note that it does not matter in the above example whether other patrons were at the bar, or whether anyone saw them through the window. It also does not matter that Jason and Sandy did not mean to offend anyone. Any noticeable sexual act done in a place where third parties could be exposed to it is an NRS 201.210 violation.2

Also note that Nevada law does not consider breastfeeding in public to be an NRS 201.210 violation.3

An NRS 201.210 violation occurs when someone touches someone else in a sexual way but with no penetration, and that person does not consent to the touching.4 Laughlin criminal defense attorney Neil Shouse provides an illustration:

Example: Joshua goes to a bar in Reno and starts flirting with Susan. Susan tells him to go away, but Joshua then gropes her backside. If caught, Joshua could be booked at the Washoe Detention Facility for violating NRS 201.210 because he sexually touched Susan, who did not consent to the touching.

2. Do I have to register as a sex offender if I am convicted of open or gross lewdness in Nevada?

Yes. However, people convicted of violating NRS 201.210 as a gross misdemeanor and not a felony are typically classified as Tier 1 sex offenders in Nevada, which are not searchable in a public database as long as the victim -- if any -- is an adult.6

3. What are Nevada's penalties for open or gross lewdness?

Note that penalties for violating NRS 201.210 are significantly less than those for rape (non-consensual sexual penetration). Rape is a category A felony carrying life with or without the possibility of parole.8

Depending on the case, it may be possible to get NRS 201.210 charges reduced to a misdemeanor such as simple battery or disorderly conduct. In addition to carrying lesser penalties, these misdemeanors do not require sex offender registration.

If the defense attorney can show the D.A. that the evidence is too weak to sustain a conviction, the D.A. may dismiss the case.

4. What are the defenses to Nevada charges of open or gross lewdness?

Which defenses would work best in fighting charges for violating NRS 201.210 depend on the unique circumstances of the case. The following are three common defense strategies:

It is illegal for police to trick people into committing a crime if they were not already inclined to commit it.9

Example: Bob is an undercover police officer. He goes to a gay bar and pretends to flirt with Zack. Bob then asks Zack to grope him. Zack says he would rather not go that far in public. Bob then flashes his gun. Fearing for his safety, Zack gropes Bob. Bob then reveals his true identity and arrests Zack for violating NRS 201.210. But Zack committed no crime because he would not have committed the lewd act but for the police threatening him. If the defense attorney can show that Bob entrapped Zack, the charge should be dropped.

Police often use lewdness laws to arrest gay men. Las Vegas Metro Police set up undercover sting operations in public restrooms and parks. Decoy officers pretend to be gay men out cruising and oftentimes will act flirtatious in order to bait unsuspecting gay men into doing something sexual. Our Las Vegas Nevada LGBT rights attorneys can help to fight back in cases of discriminatory policing where "suspects" were targeted based on sexual orientation.

It is not uncommon for people to falsely to accuse enemies or ex-partners of breaking the law, especially sex crimes. Typically, their motivations are anger or revenge. In these cases, a skilled criminal defense attorney would conduct a thorough investigation to find evidence impeaching the accuser's credibility.

Note that lying accusers like Gina in the above example would face criminal charges for filing a false police report.

4.3. Consent (when the defendant is facing charges of non-consensual sexual touching)

It is also not uncommon for people to regret their decisions to engage in sexual behavior and then to blame their partner for touching them against their will. But regret does not reverse consent:

Example: Co-workers Tony and Mia go on a first date. At the end of the evening, Tony asks Mia if he can touch her under her shirt. Mia does not want it, but she says yes because she feels like she owes him because he paid for dinner. The next day, Mia is outraged to hear that Tony told all their co-workers that she is "easy." Mia then calls the police and claims he violated NRS 201.210 by touching her without permission. But if the prosecutor cannot prove that Tony touched Mia against her will, the charge should be dismissed.

In the above example, it does not matter that Mia did not want to let Tony touch her or that Tony broke her trust. By saying yes when Tony asked to touch her, Mia legally consented. Had Tony touched Mia without asking first and without her consent, then Tony could be convicted of violating NRS 201.210.

In the current socio-political context of #MeToo and Time's Up, people may be more likely to levy accusations of open or gross lewdness. But in a court of law, the D.A. still bears the very high burden of proving guilt beyond a reasonable doubt.

Typical evidence in open or gross lewdness cases includes surveillance video, photographs, eyewitnesses, and any recorded text or oral communications between the parties. As long as the defense attorney can show the court that the prosecution's evidence is not adequate or reliable enough to justify a conviction, the criminal charge should get dropped.

5. Can I seal a Nevada conviction of open or gross lewdness?

Gross misdemeanor violations of NRS 201.210 may be sealed from the defendant's criminal record two (2) years after the case closes. But felony convictions may never be sealed.10

Note that lewdness charges that get dismissed may be sealed right away:11

6. Can I get deported for open or gross lewdness?

Possibly. Violating NRS 201.210 may be considered a crime of moral turpitude in Nevada, which is deportable.12

The most important step for non-citizens facing lewdness charges to take is to retain an experienced attorney as soon as possible. The attorney may be able to get the charge dismissed or reduced to an offense that is non-removable. Learn more about Nevada criminal defense of immigrant laws.

7. What is the difference in Nevada between open or gross lewdness and indecent exposure? 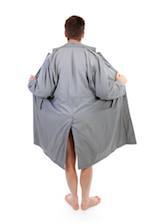 NRS 201.210 tends to refer to sexual acts. In contrast, indecent exposure refers to baring private body parts whether or not it is sexually motivated.

Indecent exposure is defined as "any open and indecent or obscene exposure of his/her person, or of another person." An example would be to expose someone's genitalia or anus in a place where others could see.

In many cases, prosecutors bring NRS 201.210 charges in conjunction with indecent exposure charges. And both offenses have identical penalties.13

The Nevada crime of statutory sexual seduction is the legal term for statutory rape. It is when an adult 18 or over has sexual relations with a person aged 15 or 14 and there is a minimum 4-year age difference. It does not matter if the child consents to the sex.

But defendants 21 and older are prosecuted for a category B felony, carrying:

Additionally, the defendant has to register as a sex offender.14

The Nevada crime of spousal rape is when one spouse sexually assaults the other spouse using physical force. In Nevada, having sex with a sleeping or unconscious spouse is not illegal.

Spousal rape is a category A felony. If the victim sustained substantial bodily harm, then the punishment may include:

Otherwise, the punishment may include life with the possibility of parole after ten (10) years.

Furthermore, the defendant has to register as a sex offender.15

Additionally, the defendant has to register as a sex offender.16

The Nevada offense of sexual harassment is harassing or bullying someone in a suggestive manner. Depending on the circumstances, it can be charged as stalking, harassment, assault, battery, peering, coercion, extortion, indecent exposure, open or gross lewdness, rape, breaching the peace, and/or as hate crimes. The punishment varies according to the charge.17

If you have been accused of violating NRS 201.210, contact our Las Vegas criminal defense attorneys at 702-DEFENSE (702-333-3673). We will do what we can to attempt to get the charges dropped or reduced to keep the incident off your criminal record and to steer you clear of the sex offender registry.

Arrested in California? See our article on California crime of Lewd or Dissolute Conduct in Public | Penal Code 647(a) PC.