Selling marijuana is a felony in Nevada unless it is done through a licensed dispensary. These dispensaries are stiffly regulated, and the marijuana is heavily taxed and can be expensive. Therefore a black market still exists despite Nevada's recent legalization of recreational marijuana. And the harsh penalties for violating Las Vegas Nevada marijuana laws have not changed with legalization.

A first offense of illegally selling pot carries up to six (6) years in Nevada State Prison and a $20,000 fine. And immigrants convicted of it can be thrown out of the U.S. But it is often possible to get criminal charges reduced or dismissed through a plea bargain.

Typical defenses to a criminal charge of selling marijuana include:

In this article, our Las Vegas criminal defense attorneys answer frequently-asked-questions about Nevada laws for selling marijuana, including punishments, defenses, record seals, and immigration consequences. Click on a topic to jump to that section: 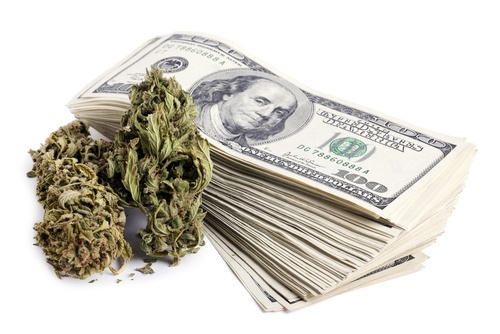 Selling pot carries extremely harsh penalties in Nevada even though it is now legal to possess up to an ounce.

1. What are "unauthorized acts" with marijuana in Las Vegas, Nevada?

Police are still cracking down hard on suspected marijuana sellers even though it is now legal to possess up to one ounce (1 oz.) of pot.

Most arrests made under NRS 453.321 involve 1) an undercover officer setting up a fake sale with an alleged marijuana dealer, or 2) a concealed police officer observing a hand-to-hand sale:

(Note that if the marijuana weighs in at fifty pounds (50 lbs.) or more, then Nevada's harsher trafficking laws apply.)

In an effort to catch alleged sellers in the act, the Las Vegas Police routinely orchestrate stings or "controlled buys." Undercover police officers will contact suspected sellers in person, over the phone, or over the internet to set up a drug sale. These officers may even dress up to appear like druggies.

Example: A cop with the North Las Vegas Police Department puts on civilian clothes and hangs out at the bar of Aliante Casino. Suddenly a stranger comes up to him and offers to sell him a joint. The cop then arrests him for selling pot. It does not matter that the stranger never handed the cop the joint. Merely offering to sell the join is sufficient to invite arrest in Nevada. 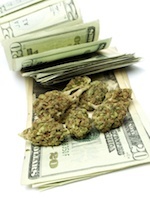 This is because selling pot is a more serious crime than merely possessing it. Law enforcement is usually more concerned with busting drug sellers than people who buy small amounts for personal use.1

2. Can I go to jail for selling marijuana in Las Vegas, Nevada?

Yes, though the prosecutor may be willing to negotiate the charges down to a lesser offense with no time behind bars.

Selling or committing other unauthorized acts with marijuana is a category B felony. The length of the prison sentence corresponds to the defendant's history of drug sale convictions:

Note that accomplices to selling face the same penalties as the people who physically conducted the drug sale.2

Remember that any act involving 50 lbs. or more of marijuana is automatically charged as trafficking, which carries harsher penalties.

The court may double the sentence if the sale or other "unauthorized act" took place in any of the following locations:

The available defense strategies depend on the specific act that the defendant was accused of. Some common defenses to the sale of...or other "unauthorized acts" with...marijuana are:

Police are allowed to lure unsuspecting drug dealers into selling them marijuana so that they can then arrest the dealers. However, officers may not induce people into committing crimes that they probably would not have committed otherwise.

Example: An undercover cop knows that Betty smokes weed recreationally. The cop goes up to her and asks to buy a joint from her. Betty says no. The cop then threatens to hit her if she does not sell it to him. Scared for her safety, Betty sells the cop the joint. Here, the cop entrapped Betty because she only sold it because the cop made her fear for her safety. Therefore, she committed no crime.

Prosecutors should drop a marijuana sale charge if the defense attorney can show that the defendant would not have sold the marijuana but for the police's interference.

3.2. Lack of credibility or corroboration 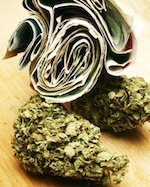 In order to convict a person for selling marijuana, the court requires proof beyond a reasonable doubt. This proof usually comes in the form of the officer's eye-witness account and/or physical evidence, such as bags of pot and cash.

Therefore the defense attorney would try to show that the officer lacks credibility and/or that there is little physical evidence to corroborate the officer's testimony. The prosecutors may then drop the charge if they see that they have insufficient evidence to sustain a conviction.

Cops may not overstep the bounds of the Constitution when investigating a case. So the defense attorney may try to prove to the court that the marijuana in the case was the product of an unlawful search and seizure. If the court agrees, it may disregard ("suppress") the evidence. This, in turn, may leave the state with too weak a case to proceed.5

Note that drug sale charges that get dismissed can be sealed right away.6

5. Can I get deported for selling marijuana?

Yes, selling pot is a deportable offense in the U.S. Therefore, aliens facing deportation because of drug charges are advised to consult with an experienced immigration and criminal defense attorney as soon as possible. The prosecutor may agree to change or reduce the charges to a non-deportable offense. Learn more about the criminal defense of immigrants in Nevada.7

Remember, you are presumed innocent until convicted. Our Nevada marijuana attorneys will negotiate aggressively with prosecutors to dismiss or reduce your charges, and to fight for you if your case goes to trial.

If you are in need of criminal defense legal representation in Nevada, contact our Las Vegas Criminal Defense Lawyers at 702-DEFENSE (702-333-3673) to schedule a free consultation.

Arrested in California? Go to our article on California marijuana sales laws.