Nevada alcohol laws permit adults age 21 and older to buy and drink alcohol at any time throughout the state. Only the "dry" town of Panaca forbids selling alcohol. And unlike other states, Nevada permits public intoxication (NRS 258.260).

However, it is a misdemeanor to misuse alcohol in any of the following ways:

Penalties include up to six months in jail and/or up to $1,000 in fines. And there are additional punishments for DUIs, including a driver's license suspension. 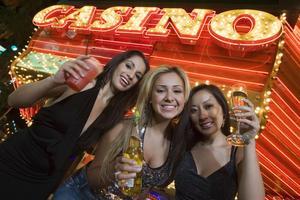 It is legal to purchase alcohol in Nevada 24/7.

1. What is the legal drinking age?

Adults 21 and older may consume wine, beer, spirits, or liquor.1

2. Is public intoxication a crime?

No. Being drunk in public is not a crime in Nevada. However, intoxicated people risk being arrested for such offenses as:

These offenses are misdemeanors. They carry up to six months in jail and/or up to $1,000 in fines.

3. Is it illegal to drive with an open container?

Yes. People may not drive with unsealed cans or uncorked bottles of alcohol in Nevada. It makes no difference if the container is out of reach of the driver. Nor does it matter if a passenger is holding the container.

Driving with an open container is a misdemeanor. The penalty is up to six months in jail and/or $1,000 in fines.2

This punishment can double if it occurred in a work zone.3 If the driver was drinking, the DMV also adds five demerit points to his/her license.4

4. Can you walk around with alcohol in Las Vegas?

It depends on where in Las Vegas. For instance, it is illegal in the City of Las Vegas to carry an open container:

Illegally carrying an open container is a misdemeanor. Jail is a potential penalty. But the judge will likely order just a fine.5 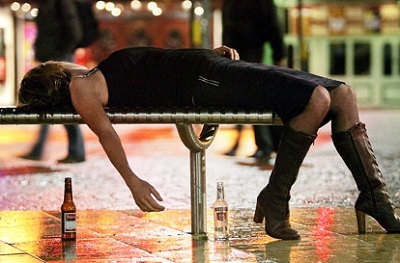 It is not a Nevada crime to be inebriated in public.

5. What time can you buy alcohol?

There are no time restrictions for selling or buying alcohol in Nevada. Alcohol can be bought or sold seven days a week, 24 hours a day, including Sunday. State law implements no mandatory closing times for bars, taverns, or saloons.

6. What are laws on drinking and driving?

A first-time or second-time DUI is a misdemeanor as long as no one gets hurt. The defendant also faces a driver's license suspension.

A third-time DUI in Nevada within seven years of the first is a felony. And any DUI that causes substantial bodily harm or death is also a felony. (Learn more about DUI penalties.)

All Nevada drivers arrested for DUI give implied consent to take a breath test or a blood test. If the driver refuses to be tested, the police can get a court order to draw the driver's blood by force.6

As discussed in section 3, Nevada law prohibits driving with an open container of alcohol. There are limited exceptions such as party buses as long as the driver is not drinking.7

7. What happens if a minor tries to use a fake ID?

People under 21 face misdemeanor charges for buying or possessing alcohol. It is also a misdemeanor to have a fake ID to buy alcohol. The penalty carries up to six months in jail and/or up to $1,000 in fines.

Defendants under 18 will likely be prosecuted in Juvenile Court instead of criminal court. In Juvi Court, the child may have his/her driver's license suspended as well.8 (Learn more about  juvenile law.)

Drivers under age 21 can be convicted of DUI if their BAC is only .02%. Penalties for underage DUI (NRS 484C.350) are similar to the punishments for adults. In addition, defendants are required to undergo a medical evaluation for alcohol addiction.9

Adults face misdemeanor charges for giving alcohol to people under 21. The sentence is up to six months in jail and/or up to $1,000 in fines.

It depends on local laws. In Reno, minors may consume alcohol in their home in their parents' presence.10 But Clark County allows minors only to possess -- not consume -- alcohol at home with their parents' permission.11

Parents should check their local county and municipal codes before letting their children drink at home.

9. Is there a minimum age for serving alcohol?

Bartenders and waiters who serve open containers of alcohol must be 21 years old. But grocery stores and convenience marts that sell alcohol may employ minors as young as 16. The only conditions are:

The employees may also have to obtain an alcohol education card as a condition of working around alcohol.12

Our legal team may be able to get your charges reduced or dismissed without a trial. Our goal is to do everything to keep you out of jail and to keep your record clean.