Nevada law defines grand larceny (also called "grand theft") as deliberately stealing property valued at $650 or more. If the value of the stolen property is less than $650.00, the offense would be "petit (petty) larceny".

There are many ways prosecutors determine whether the value of allegedly stolen property amounts to or exceeds $650. They may look to

In the end, courts will generally attribute to the property the highest reasonable value.2

The penalties for grand larceny depend on the value of the property that the defendant was accused of taking:

Because violating NRS 205.220 is a felony, defendants who have been convicted of it must wait at least 5 years after the case ends to get a criminal record seal.

Possible grand larceny defense strategies that could get charges dismissed or reduced include showing that:

As long as the prosecutor has insufficient evidence to prove guilt beyond a reasonable doubt, criminal charges should not be sustained.

In this article, our Las Vegas theft defense lawyers discuss: 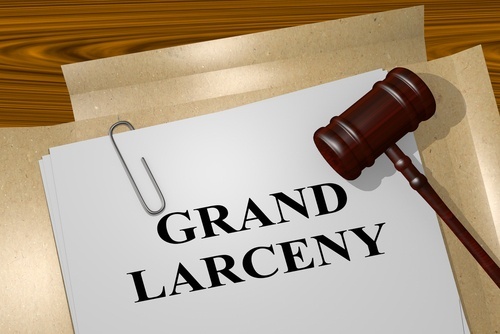 The sentence for a grand theft conviction depends on the value of the allegedly stolen property:3

If the value of the property is at least $650 but less than $3,500, grand theft is a category C felony. The sentence carries:

If the value of the property is $3,500 or higher, grand theft is prosecuted as a category B felony. The punishment includes:

As a felony, violating NRS 205.220 carries other long-term consequences: A conviction may bar the defendant from owning a firearm, voting, serving in the government, or receiving welfare or food stamps.4 It also may disqualify the defendant from job opportunities.

Depending on the circumstances of the case, the prosecutor may be willing to lessen a grand theft charge to petty larceny or possibly dismiss the charge. Defendants with no prior criminal record and who pay full restitution have the best chance of getting the charges ultimately dropped or lessened to a misdemeanor.

3. Defenses to grand larceny in Nevada

A sampling of the defense strategies in Nevada grand theft cases include demonstrating that:

Note that it is not a defense to theft charges that the suspect was caught before he/she could leave the premises with the property.

3.1. The property belonged to the defendant

It is impossible for people to steal property that belongs to them. Sometimes questions of ownership become complicated when more than one person own a particular item, or if a person uses aliases. Mesquite criminal defense attorney Neil Shouse gives an example:

Example: Neighbors Hal and Henry co-own a lawnmower that they share. Eventually they have a falling out and stop speaking. One day Hal takes the lawnmower from Henry's carport to use it on Hal's lawn. Angry, Henry calls the police to have him arrested for grand larceny. But since Hal co-owned the lawnmower, the most Hal can get cited for is trespassing on Hal's property.

As long as the prosecutor cannot prove that the defendant did not own the property in question, charges for violating NRS 205.220 should be dropped.

3.2. The defendant lacked intent to steal

Mistakenly taking another person's property is no crime. Henderson criminal defense attorney Michael Becker illustrates how this could happen: 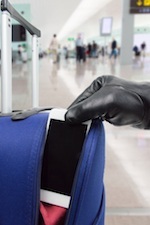 Example: After flying into Las Vegas, Jeb absent-mindedly takes the wrong suitcase from the carousel and tries to leave McCarran Airport. The passenger who owns the suitcase alerts the police, who detain Jeb at the taxi line.

The suitcase's owner is furious and insists the police arrest Jeb for stealing. But Jeb explains how his luggage looks nearly identical to the suitcase he took by accident. When the officers realize that Bill simply made a mistake and had no intention of stealing the suitcase, the officers let him go without being arrested.5

Since intent is not something visible or concrete, courts rely on circumstantial evidence to determine whether a person had intent to steal. This includes everything from the defendant's behavior and eyewitness accounts to police reports and surveillance video.

Example: Las Vegas Metropolitan police arrest Betsy for stealing her co-worker Jan's silver necklace. Jan told prosecutors that the necklace is a priceless heirloom worth thousands of dollars, so Betsy gets charged with violating NRS 205.220.

Betsy's attorney gets the court's permission to have the necklace independently appraised. The appraisers value it at only $300. Furthermore, similar necklaces on the market sell for about $300. The court then grants Betsy's attorney's motion to dismiss the case, and the prosecutor instead charges Betsy with only petit larceny.

In the above example, it makes no difference that the necklace was invaluable to Jan. As discussed in section one above, courts look to the fair market value when determining stolen property's worth.

3.4. The police conducted an illegal search

The Fourth Amendment protects against unreasonable searches and seizures. In reality, the police do not always follow the rules when they hunt for evidence. Sometimes they neglect to get a warrant when one is necessary. Or the warrant they get may be invalid.

Whenever the police find evidence through an unlawful search, the defendant's attorney can make a motion to suppress the evidence. If the court grants the motion, the D.A. may be left with too weak of a case to continue prosecuting.6

In any larceny case, an experienced defense attorney will gather all available evidence, review the relevant statutes and latest case law, file any necessary documents and motions with the court, and craft the most effective strategy while protecting the defendant's constitutional rights.

The ultimate goal is to do everything possible in an effort to get the charges dropped, negotiate a favorable plea bargain, or litigate the case until the trial ends with an acquittal.

4. Getting a grand larceny case sealed in Nevada

There is a five (5) year wait-time after the case closes before a defendant can pursue a record seal for a grand theft conviction.7

Note that the waiting period reduces drastically if the charge gets reduced or dismissed:

Employers are much more likely to pass over job applicants with theft offenses on their background checks than those with clean records. So anyone with criminal records are encouraged to explore getting a seal as soon as it is available.

5. Grand larceny is a deportable offense

Larceny falls under not one but two classes of deportable offenses:

Therefore, immigrants arrested for grand theft should seek legal counsel immediately to try to get the charge dismissed or changed to a non-removable offense. Learn more about the criminal defense of immigrants in Nevada.

6. Grand larceny versus other larceny crimes

Call us if you have been arrested for theft

If you would like to explore getting your Nevada larceny charges reduced or dismissed, call 702-DEFENSE (702-333-3673). Our Las Vegas criminal defense lawyers can speak with you for free.

We will investigate, negotiate, and litigate in pursuit of the best possible outcome in your case. And if necessary, we are prepared to take your case all the way to a jury and argue zealously for a "not guilty" verdict.

Arrested in California? Go to our webpage about California grand theft law.

Arrested in Colorado? Go to our webpage on Colorado felony theft laws.

• Will I get deported for a “grand larceny” charge in Nevada?


• When can I seal my “grand larceny” case from my criminal records in Nevada?


• Can I keep my guns if I am convicted of “grand larceny” in Nevada?


• Is it possible to win a “grand larceny” case at jury trial in Nevada?


Can I get my “grand larceny” charge dismissed in Nevada?


Can I meet with the D.A. before “grand larceny” charges get filed against me in Nevada?