If you are an undocumented alien considering "adjusting status" to become a legal resident, having a criminal history may disqualify you and even result in removal proceedings being brought against you. In this article, our Las Vegas Immigration Criminal Defense lawyers summarize which crimes make undocumented aliens inadmissible and therefore vulnerable to removal proceedings.1

This page applies only to undocumented/illegal aliens and to legal aliens who are currently abroad and seeking readmission. If you are a legal alien living in Nevada, go to our webpage on Nevada Crimes that Lead to Deportation. If you already have a criminal conviction, go to our page on Ways to Change or Vacate Past Criminal Convictions in Nevada.

If you are an alien in Nevada and the U.S. government reasonably believes you have been involved with drug trafficking, you may not be admissible into the U.S. Even if you are just the spouse or child of a drug trafficker and you have, with full knowledge, received money from the drug trafficking in the last five years, you may be considered inadmissible also.2

To learn more about Nevada drug laws, visit our page on Drug Crimes in Nevada.

If you are an alien who came to America to commit prostitution, to traffic prostitutes or to receive money from prostitution, you may be inadmissible into the U.S. as long as these acts allegedly took place within ten years of applying for admission into the U.S.3

To learn more about Nevada solicitation laws, visit our page on Prostitution crimes in Nevada. 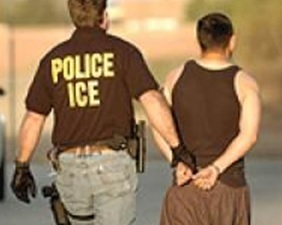 Convictions of More than One Offense in Nevada are inadmissible crimes

If you are an alien in Nevada who has been convicted of at least two crimes with a combined sentence of five years or more, you may be inadmissible into the U.S.4

Crimes involving moral turpitude (CIMTs) is a category of crimes that are especially reprehensible. Some examples of CIMTs are murder, rape, kidnapping, and prostitution in Las Vegas. If you are an alien who has been convicted of a CIMT or has admitted to committing a CIMT, you may not be admitted into the U.S5

If you have been convicted of only one CIMT, however, you will still be admissible into the U.S. as long as the judge imposed six months or less of jail time AND the maximum sentence for the CIMT is no more than one year.6 So, for example, a first offense of prostitution in Las Vegas would not render you inadmissible because its maximum sentence is only six months.

To learn more about CIMTs, which is one of the most confusing areas of immigration law, visit our Crimes Involving Moral Turpitude in Nevada page.

If you are an undocumented alien living in Nevada, we know you are here only to work hard, earn an honest living and ensure a better life for your kids. So if you are hoping to adjust status to become a legal alien but are suspected of committing a criminal offense, we may be able to aid in your case. Call our Las Vegas immigration criminal defense lawyers at 702-DEFENSE (702-333-3673) for a free consultation.

Go back to the Criminal Defense of Immigrants in Nevada main page.

6 8 U.S.C. § 1182(a)(2)(A). Another exception to the CIMT rule concerns aliens who were under eighteen when the CIMT allegedly occurred: As long as the sentence ended more than five years prior to the alien applying to the U.S. for admission, the alien will not be removed for that offense.