NRS 612.445 is the Nevada insurance fraud crime where people fraudulently obtain unemployment insurance benefits that they are not entitled to. The statutes states:

A person shall not make a false statement or representation, knowing it to be false, or knowingly fail to disclose a material fact in order to obtain or increase any [unemployment insurance] benefit or other payment[.]

The punishment for violating NRS 612.445 depends on how much money the defendant allegedly made from the UIF. In every case, the defendant must pay restitution in Nevada back to the Employment Security Division of the Department of Employment, Training and Rehabilitation.

But it may be possible for a skilled defense attorney to get the charges dismissed or reduced through a Nevada plea bargain. Possible defense arguments to NRS 612.445 allegations include:

In this article, our Las Vegas criminal defense attorneys discuss the Nevada crime of unemployment insurance fraud. Scroll down or click on a topic below to jump to that section: 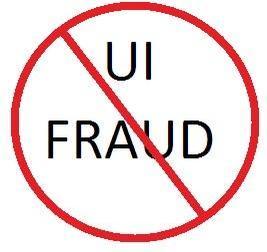 UI fraud can be a felony or a misdemeanor in Nevada.

NRS 612.445 makes it a crime for people to lie in order to obtain or increase their unemployment insurance benefits by:

Example: Max was fired from his blackjack dealer job at the Mirage for stealing chips from the table. Max then files for unemployment insurance and claims that he was laid-off due to downsizing. The Nevada Employment Security Division investigates and discovers that Max was lying about how he lost his job. They inform the Las Vegas Metropolitan Police, who then arrest Max and book him at the Clark County Detention Center for unemployment insurance fraud.

Max in the above example could liable for UI fraud because he lied about being laid off in order to collect on benefits he was ineligible for.

Note that Nevada has a separate statute prohibiting employers from fraudulently trying to reduce or eliminate their payment requirements.2 Typical scenarios of unemployment insurance fraud perpetrated by employers are:

1.1. Investigation and prosecution of UI Fraud in Nevada

The Nevada Employment Security Division is skilled at finding “red flags” in UI applications that suggest the claimant is lying. If the Division believes fraud may have occurred, the case will be referred to law enforcement.

Note that a claimant who makes multiple false statements in support of a UI claim face prosecution for just that one claim, not for the multiple misrepresentations:3

Example: Stella is employed full-time in Mesquite but is struggling to pay her bills. She fills out an unemployment insurance application and claims to have been laid-off. Later the Nevada Employment Security Division calls Stella to ask some questions, and Stella lies about not having a pension.

If the Division discovers her two misrepresentations, the Mesquite Police could arrest her and book her at the Mesquite Detention Center for UI fraud. But even though she lied twice -- about being laid-off and not having a pension -- she faces only one UI fraud charge. This is because Stella made only one UI claim, and both lies were in support of that claim.

If Stella in the above example falsely applied for unemployment insurance on two separate occasions, then she could face two counts of UI fraud in Nevada.

The purpose of unemployment insurance (UI) is to help sustain recently laid-off workers while they search for new jobs. The program is funded by taxes paid by employers.

In order to be eligible for UI in Nevada, the former employee (“claimants”) must meet the following qualifications:

NRS 612.445 treats UIF as a type of Nevada theft crime. The punishment turns on the amount of money the defendant illegally obtained. In addition, defendants are required to repay the Department of Employment all the benefits they received:

Obtaining less than $650 from unemployment insurance fraud is a misdemeanor, carrying:

Obtaining at least $650 but less than $3,500 from unemployment insurance fraud is a category C felony, carrying:

Obtaining at least $3,500 from unemployment insurance fraud is a category B felony, carrying:

In addition to full repayments, Nevada's Department of Employment will fine UIF defendants 15% of the wrongfully obtained benefits. So if someone illegally received $1,000 in benefits, he/she must repay not only the $1,000 but also an additional $150.

Finally, the Department of Employment may impose another fine based on the amount of benefits that defendants received through the UI fraud:

Note that defendants found liable for UIF will be barred from receiving future unemployment insurance fraud benefits until their benefits are repaid or until 52 weeks have passed since the fraudulent claim was filed (whichever is later). However, the Department can make exceptions in certain situations.5

Sometimes people are falsely accused of violating NRS 612.445 due to a clerical error.

Nevada judges are aware that government agencies are clumsy bureaucracies that make mistakes and may blame innocent people. The Nevada Employment Security Division handles tens of thousands of cases, and inevitably some fall through the cracks.

If the defense attorney can show that the defendant is a victim of a clerical error, the UI fraud case should be dropped.

Nevada judges are also aware that applying for unemployment insurance is confusing. It is easy for well-meaning people to make honest mistakes, especially for Nevadans who speak little or no English.6

Typical errors are writing the wrong social security number, miscalculating earnings, and forgetting to report freelance income. As long as the prosecution cannot demonstrate beyond a reasonable doubt that the defendant acted with intent to defraud, the UI fraud charges should be dismissed.

In some UIF cases, defendants turn out to be the victims of identity theft. The real culprits steal the defendant's personal information in an attempt to collect benefits for themselves.

Typical evidence in these cases includes electronic records, surveillance video, and recorded communications. If the prosecution cannot show that the defendant is the one who propagated the fraud, then the case should result in a dismissal.

UIF is likely a deportable crime in Nevada, especially if the defendant obtained several thousands of dollars in unearned benefits. Aliens facing NRS 612.445 charges are encouraged to consult with experienced counsel who may be able to negotiate a charge reduction to a non-deportable offense.

Defendants who have their UIF charges dismissed can pursue a criminal record seal right away in Nevada. Otherwise, the waiting period to apply for a record seal depends on what category of crime the defendant was convicted of:7

If you have been charged with “unemployment insurance fraud” in Las Vegas, call our Las Vegas criminal defense lawyers at 702-DEFENSE (702-333-3673) for a free phone meeting. We may be able to get the charges reduced or dropped so your record stays clean.