In Nevada, forgery is defined as intentionally attempting to defraud another by means of falsified documents. Common types of forgery involve:

Forging documents is typically prosecuted as a category D felony in Nevada, carrying the following penalties:

This type of felony is not eligible for a criminal record seal until 5 years after the case is closed. But depending on the case, the D.A. may be willing to plea bargain the charge down or even dismiss it.

Common arguments to fight forgery charges include establishing that:

If the defense attorney can show that the state's evidence is insufficient to sustain a guilty verdict, the charges should be dropped.

In this article, our Las Vegas forgery defense attorneys discuss: 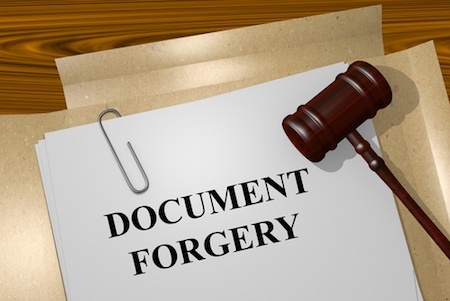 Depending on the case, forgery can be prosecuted as a felony or a misdemeanor in Nevada

1. What is forgery in Las Vegas, Nevada?

There are many different forms of forgery, but it generally consists of three parts (called "elements") that prosecutors need to prove in order to make the charge:

1.1. The defendant passes a false instrument as true.

The first element of forgery is that the defendant uses -- or tries to use -- a falsified document as if it were genuine. Some examples include:

1.2. The defendant knows the instrument is false

The defendant has to be aware that the document is not genuine in order to be convicted of forgery. For instance, if a husband forges a signature on a stolen check and instructs his wife to deposit it in their account, the wife committed no crime as long as she believed the check was legitimate.

1.3. The defendant has the intent to defraud

The central element in any forgery case is that the defendant intended to use the forged document to defraud. In other words, the defendant was deliberately trying to trick another by passing off a false document as true. Predictably, the motivation for intent to defraud often involves:

Therefore, people who accidentally or mistakenly falsify a document committed no crime as long as they lacked fraudulent intent.

Unlike an allegedly forged document, intent to defraud is a state of mind and not easily proven. Therefore, the court relies on circumstantial evidence to form common sense inferences about whether the defendant had fraudulent intent. Examples of such evidence include

2. What are the penalties for forgery in Las Vegas, Nevada?

In general, forgery is a category D felony resulting in a sentence of:

But Nevada law spells out several separate forgery laws, each with its own punishment:6

Depending on the case, the prosecutor may be willing to negotiate a deal whereby the forgery charge is reduced to a lesser offense or dismissed. A defendant is more likely to receive a favorable plea bargain if he/she:

3. What are the defenses to a forgery charge?

The three most common forgery defenses are:

Note that it is not a defense to forgery charges that there were no victims or that nobody lost money due to the forgery.

There are many reasons people may be falsely accused of forgery, such as:

Depending on the nature of the case, the defendant's attorney can hire an expert witness to attest to the documents' authenticity and defendant's handwriting.7

3.2. The defendant did not intend to defraud

A defendant cannot be criminally liable for forgery if he/she had no fraudulent intentions.

Several types of circumstantial evidence might be admissible to prove intent, such as:

If the prosecution cannot prove beyond a reasonable doubt the defendant intended to defraud, then forgery charges should not be sustained.

Note that voluntary intoxication is not a defense to forgery unless the defendant was grossly incapacitated.8

3.3. The police conducted an illegal search

The Fourth Amendment requires that police follow strict rules when conducting searches and seizures. Police must get a valid search warrant, or there needs to be an exceptional circumstance that justifies not getting a warrant. But in many cases, police overstep their constitutional bounds and illegally seize evidence.

4. When can I seal a forgery conviction in Las Vegas, Nevada?

The typical forgery conviction prosecuted under NRS 205.090 can be sealed five (5) years after the case ends.9 But if the charge gets reduced or dismissed, the waiting period is significantly lessened:10

People with any fraud conviction on their criminal record face loss of job opportunities and social stigmatization. So past forgery defendants are advised to pursue record sealing as soon as their case allows. The entire record seal process takes several weeks from start to finish.

5. Can I get deported for forgery in Las Vegas, Nevada?

Yes, because forgery is a crime involving moral turpitude.11 Also, some forgery offenses fall within the deportable class of crimes called aggravated felonies.12

Consequently, non-citizens arrested for forgery are strongly encouraged to hire an attorney experienced in both immigration and criminal defense law. The defendant may be able to stay in the country if the attorney can get the forgery case dismissed or reduced to a non-removable offense.

Our Las Vegas criminal defense lawyers are happy to speak with you for free about your case. Call us at 702-DEFENSE (702-333-3673). We take a comprehensive approach. First, we try to craft a deal that will result in your charges getting reduced or dismissed. But if necessary, we will then take your case to a jury and fight zealously for a "not guilty" verdict.

Arrested in California? Go to our informational article on California Forgery law.

Arrested in Colorado? Go to our informational article on Colorado Forgery law.