DUI checkpoints in Nevada are sobriety roadblocks where police check motorists for drunk or drugged driving. Once a driver arrives at a checkpoint, the driver must stop, answer the police's questions, and comply with their requests. Drivers may leave only when the police give the okay.

If the police smell alcohol or detect impairment, they may ask the driver to perform field sobriety tests (FSTs) and take a preliminary breath test. Drivers who the officers suspect are intoxicated or high get arrested for driving under the influence (DUI).

Law enforcement typically set up DUI checkpoints on high-traffic roadways over holiday weekends. The Las Vegas Metropolitan Police Department (LVMPD) often gives advanced notice of when these checkpoints will be.

There are no current or upcoming DUI checkpoints. Check back here or our twitter feed or facebook page for updates.

Nevada's most recent sobriety checkpoints include:

Driving through a sobriety checkpoint without stopping is a gross misdemeanor. The maximum penalty is:

But if the driver causes death, substantial bodily harm, or more than $1,000 in property damage, the driver faces category B felony charges. The sentence is:

It may be possible to get checkpoint violation charges reduced or dismissed by arguing these defenses:

Driving through a DUI sobriety checkpoint without stopping is a gross misdemeanor in Nevada.

1. What is the definition of DUI checkpoints in Nevada?

Las Vegas DUI checkpoints are cordoned-off areas of road where police stop every driver to check whether they are under the influence. All drivers going through the checkpoints get stopped, not only those exhibiting signs of intoxication. Then police arrest the motorists they believe are driving drunk or driving under the influence of drugs.1

The LVMPD typically sets up DUI checkpoints in high-traffic areas during holiday weekends or special events when heavy drinking goes on.2 Examples include:

The purpose of DUI checkpoints is to deter intoxicated driving. These checkpoints also go by the names:

Sometimes, police at roadblocks do not stop every car but every fourth car, or every license plate that starts with an even number, etc. Any predetermined formula for detaining drivers is allowed as long as it is not in any way discriminatory.

When a person is driving into a sobriety checkpoint, the officers will stop the driver and ask some questions like, "Have you been drinking?" If it is nighttime, officers usually shine a flashlight into the vehicle to see if the driver is transporting alcohol in violation of Nevada's open container laws (NRS 484B.150).

If the driver seems sober, the officers will allow the driver to continue through the checkpoint. But if the officers reasonably suspect that the driver is exhibiting intoxicated behavior, the driver will be directed to a nearby area for tests. Examples of impaired behavior include:

The police may ask the driver to take a preliminary breath test (PBT) and perform FSTs, including the horizontal gaze nystagmus, one-legged stand and walk and turn. Depending on the results, the driver may be arrested for driving under the influence.

DUI checkpoints are an exception to the "probable cause" rule.

Yes, if the DUI checkpoint is administered properly. In order for a roadblock to be valid in Nevada, law enforcement must follow the following four rules:

If police fail to follow these protocols, the defendant's charges for driving through a roadblock may be reduced or dismissed.

3.1. Checkpoints are not legal in every state

4. Is there advanced notice of Las Vegas DUI checkpoints?

Las Vegas police may set up roadblocks without publicizing it first. The checkpoint signs that are readable from 100 yards away are supposed to serve as a sufficient warning.5

5. Where do police commonly set up checkpoints?

Police may set up sobriety roadblocks on nearly any public road. Ten streets where the LVMPD has recently put DUI checkpoints are:

6. What are the penalties for driving through DUI checkpoints without stopping? 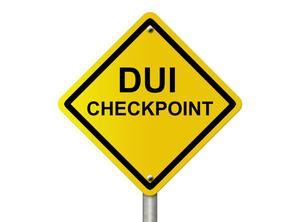 Traveling through a Nevada administrative DUI roadblock without stopping is a gross misdemeanor carrying penalties of:

But if illegally driving through the roadblock results in death, substantial bodily harm or damage to property in excess of $1,000, the driver faces category B felony charges. The punishment includes:

Depending on the case, the defendant may face drunk or drugged driving charges as well. See our article about Nevada DUI penalties.

6.1. Can I turn around if I see a checkpoint in the distance?

Yes. If a driver sees warning signs of an upcoming DUI checkpoint in Nevada, the driver is allowed to take any legal detour prior to that checkpoint to avoid going through it. But the driver may not make an illegal U-turn (NRS 484B.403) or an improper turn (NRS 484B.400) in order to escape a roadblock.7

7. What are common defenses to DUI checkpoint arrests?

7.1. The driver followed the officer's directions

Anyone who has been through a roadblock knows they are chaotic. There are hundreds of cars moving at a slow pace while a dozen or so officers scramble to check every driver.

With so many cars, the police may have trouble keeping straight which drivers have been given the green light to leave, and sometimes there is miscommunication between the officers. Drivers may find themselves arrested for disobeying an officer or driving through a checkpoint when in fact they did nothing wrong.

As long as the prosecution cannot prove beyond a reasonable doubt that the defendant violated the law, the charge should be dropped.

7.2. The checkpoint was not legal 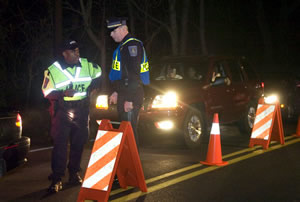 Drivers may not violate traffic laws to avoid going through a DUI checkpoint in Nevada.

Checkpoints are valid only if they have the proper signage and signals visible from the proper distances (see question 3 for more information).

If the defense attorney can demonstrate that the police fell short while administering a sobriety checkpoint, the case should be dismissed. A defense attorney would rely on photographs, surveillance video, and eyewitness testimony in an effort to show the roadblock violated Nevada law.

7.3. The police engaged in misconduct

Once a driver stops at a DUI checkpoint, police have to follow the same rules they do during normal traffic stops. This includes asking questions, if necessary performing a preliminary breath test, and possibly administering field sobriety tests.

If the police cut corners and then arrest a person for violating NRS 484B.580, a defense attorney may be able to persuade the D.A. to drop the charges. Video footage from dash cams, body cams, or smartphones often serves as helpful evidence of police mistakes.

Currently, it is not a defense to argue that DUI checkpoints are unconstitutional. Police stopping drivers with no probable cause seems like an unlawful search and seizure. But the U.S. Supreme Court ruled that correctly administered roadblocks are consistent with the Fourth Amendment.8

8. Can the criminal record be sealed?

It depends on whether the case was prosecuted as a gross misdemeanor or felony, and whether the defendant was convicted or not:

Note that a misdemeanor DUI conviction has a seven (7) year waiting period for a record seal, whether or not a checkpoint was involved. And felony DUI convictions may never be sealed.9

Whether or not your DUI arrest occurred at a Nevada checkpoint, our Las Vegas criminal defense attorneys can help. In many cases, we can get DUI charges reduced or dismissed due to police misconduct and other technicalities. Call us at 702-DEFENSE (702-333-3673) for a free consultation today.

Arrested in California? Refer to our informational article on California sobriety checkpoints.

Arrested in Colorado? Refer to our informational article on Colorado sobriety checkpoints.