DUI blood tests can yield inaccurate results and cause good people to get wrongly convicted of Las Vegas drunk driving charges. This article explains what blood tests are in Nevada DUI cases and how the results can be challenged and possibly excluded from evidence.

Sometimes. When you are arrested for driving under the influence in Nevada, the law presumes you have given “implied consent” to submit to an evidentiary chemical test to determine your blood alcohol level. Whether you are required to submit to a blood test specifically, or may take another kind of test, depends on the circumstances . . . .

If the arresting officer believes you are intoxicated with only alcohol and not drugs, you have the choice to take a breath test or a blood test. But if the incident resulted in someone else getting seriously hurt or killed or if you have been convicted of DUI in the last seven years, the cop may order you to submit to a blood test specifically.

Blood tests are more expensive to administer than breathalyzer tests in Nevada. So if you have the choice to take a breath test or a blood test and you choose a blood test, you will then be charged the several hundred dollars in extra costs associated with the blood test (but only if you are ultimately convicted of the Las Vegas DUI charge).

If the arresting officer believes you are intoxicated with drugs instead of alcohol or in addition to alcohol, then you do not have a choice . . . the cop may order you to submit to a blood test and/or a urine test in addition to the breath test. (Note that urine tests are no longer used to test for marijuana.)

Nevada DUI arrestees who suffer from hemophilia or heart conditions that require anticoagulants cannot be forced to submit to a Las Vegas evidentiary blood test but can still be required to take a breath and/or urine test. (NRS 484C.160) 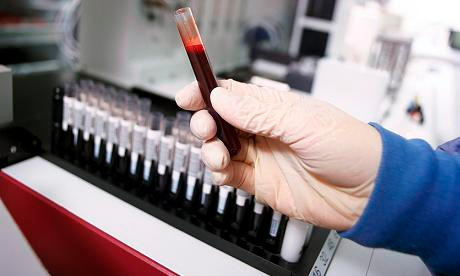 What if I refuse to take a blood test for a Nevada DUI case?

If you refuse to submit to a required DUI evidentiary blood test in Nevada, the officer would have to obtain a warrant and may then use “reasonable force” such as physically constraining you in order to administer a forced blood draw. There are long-term consequences as well:

Refusing to take any required chemical test for a “driving under the influence” case in Las Vegas will cause your driver's license to be suspended for one to three years! And if your DUI case goes to trial, the prosecution may inform the judge or jury that you refused to take the test which they then might construe as an admission of guilt.(NRS 484C.240)

How are blood tests conducted in Nevada DUI cases?

After you are arrested for DUI in Nevada, an officer from Nevada Highway Patrol or Las Vegas Metropolitan Police takes you to jail or another booking area so that the evidentiary tests can be administered. Licensed phlebotomists are either stationed there or "on call" to come by and to conduct the blood extraction.

If I take a DUI blood test, will my driver's license be suspended in Nevada?

Perhaps, but probably not right away. Drivers who elect to take a breath test and fail it will have their driver's license suspended immediately . . . but drivers who take just a blood test usually will not face license suspension until the test results come back, which may not be for several weeks.

If the DUI blood test results come back with an “illegal per se” BAC reading of 0.08 or above, the Nevada DMV will mail the driver a notice of the suspension and their right to request a Las Vegas DMV hearing to contest it. The suspension may last up to three years or more depending on the nature of the case. (NRS 484C.220) 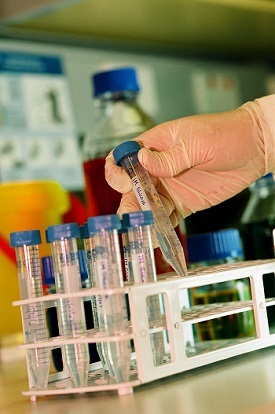 Can I have my blood independently tested in a Nevada DUI case?

Yes. When Nevada law enforcement administers a DUI blood draw on you, they extract enough blood so that you can have some of it independently tested by a chemical tester of your choice. (In California, this is called a “blood split.”)

It is highly recommended that you or your attorney request an independent test of your blood in a Nevada DUI case because it can potentially show that the blood test results reported by law enforcement were unreliable, mishandled, or inaccurate.

How can I contest blood test results in a Nevada DUI case?

Just like California does with Title 17, Nevada law mandates rigid regulations that police and chemical testers must adhere to when conducting an evidentiary blood test and determining the results. If your attorney can raise a reasonable doubt that the state faltered in just one of these many areas, your whole DUI case might get dismissed. (NRS 484C.250)

The following are just some of the defenses your attorney may explore in order to challenge the validity of your Nevada DUI blood test results:

As you can see, dozens of factors can lead to contamination and this unreliable blood test results in a Nevada DUI case. If your attorney can show that the state's evidence is too weak to prevail at trial, prosecutors will be much more amenable to negotiating down the charges to something lesser or even to dismiss the case outright.

If you have been charged with DUI in Nevada, you are welcome to contact our Las Vegas drunk driving defense lawyers at 702-DEFENSE (702-333-3673) for a free phone meeting. Whether your evidentiary test was for breath, blood or urine, we are experienced in all the ways that may suppress the results from coming into evidence and allow your DUI case to be reduced to a lesser charge or even thrown out.


• How do “breath tests” work in Nevada DUI cases?