People can still be convicted for dog fighting even if no spectators showed up to the fight, no money was gambled, and no animals were hurt.

It may be possible to plea bargain dog fighting charges down to a lesser offense or a dismissal. Otherwise, the penalties turn on the specific charge:

If the D.A. fails to prove guilt beyond a reasonable doubt, then the charge should be dismissed. 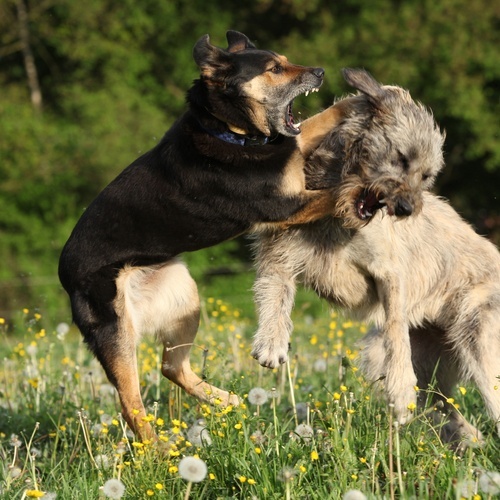 Dog fighting is a crime under both Nevada state and federal law.

1. Is dog fighting illegal in Nevada?

Yes. Dog fighting is defined as an organized fight between two or more dogs, sometimes until the death. People typically gather to watch and gamble on these fights.

Note that it does not matter whether any gambling occurs or even if there are any spectators watching the fight. Merely the act of contributing to or causing a dog fight is criminal under NRS 574.060 and 574.070.

Also note that farmers are permitted to use dogs for the lawful management of livestock. Likewise, hunters may use dogs in the assistance of lawful hunting.[1]

Prosecutors may press federal charges when the alleged dog fighting operation crosses state lines.[2] The most notorious example from current events is NFL star Michael Vick. In his case, some of the dogs were hanged, drowned, shot, or electrocuted if they did not die in the ring.[3]

2. Will I lose my dog for dog fighting in Nevada?

Yes. Law enforcement may legally confiscate dogs upon probable cause that they are used for dog-fighting. They will remain in state custody pending the outcome of the criminal case.[4]

3. What are the penalties for dog fighting in Nevada?

A dog fighting conviction in federal court carries a maximum punishment of five (5) years in federal prison and/or a fine.[7]

4. What are the defenses to Nevada dog fighting charges?

Although dog fighting is a very serious charge, several possible defenses exist that could result in the case getting dropped. The following are just some strategies a criminal defense attorney may explore using to fight dog fighting allegations:

Note that it is not a defense if the dogs were uninjured, no gambling took place, or no spectators showed up.

4.1. The defendant had no criminal intent

Participation in dog fighting activities has to be willful in order to qualify as criminal.[8]

Example:  Charles breeds pit bulls in Nevada. Patrick buys one of these pit bulls to use in an organized dog fight. Police show up at the fight and arrest Patrick. When Patrick tells the police where he got the pit bull, the police arrest Charles for selling a dog for dog fighting. But as long as the D.A. cannot prove that Charles knew about Patrick's purpose for buying the pit bull, the charges against Charles should be dismissed.

4.2. The defendant was falsely accused

There are many reasons why people may lodge wrongful allegations against someone else, such as revenge, anger, or a misunderstanding.

Example: Nancy is enraged at her neighbor Bill for letting his dogs bark all day. To get back at him, she calls the Las Vegas Metropolitan Police and claims she saw Bill host a dog fight in his backyard. The police question Bill, who produces angry letters and voicemails from Nancy threatening to ruin his life. Since there is no other evidence that Bill hosted a dog's fight other than Nancy's allegations, the police decide not to arrest Bill. Instead, they arrest Nancy for filing a false police report.

If Bill's case in the above example did progress to trial, his criminal defense attorney could try to impeach Nancy's credibility through cross-examination. As long as the D.A.'s evidence is ultimately too ambiguous, unreliable or insufficient to prove that Bill participated in a dog fight, the case should end with an acquittal.

4.3. The police search was unlawful

Part of the defense attorney's job is to investigate not only the defendant's actions but also law enforcement's behavior to search for any and all mistakes they may have made.

Example: A Henderson police officer gets a tip that Mark is growing marijuana at his home. The officer shows up to Mark's house to ask to search it, but no one is home. The officer is too lazy to get a warrant and decides to break in to search for the marijuana. While inside he finds evidence of organized dog fighting, and he then arrests Mark when he gets home. After the D.A. presses charges, Mark's defense attorney files a Nevada motion to suppress asking the judge to exclude all the evidence the officer unearthed from the illegal, warrantless search of the home. If the judge agrees, the D.A. may throw out the case for lack of proof.

So even if Mark in the above example did engage in organized dog fighting, the officer's misconduct could be enough to get the entire matter dropped.

5. Can I seal a Nevada dog fighting conviction?

Usually yes, though the waiting period to get a seal depends on the specific offense and whether the defendant has previous convictions:

Learn more about how to get a record seal in Nevada. Note that federal dog fighting convictions may not be sealed.

6. Will I get deported for dog fighting?

Possibly. Dog fighting is considered a crime involving moral turpitude, which is a type of deportable offense.[11]

Non-citizens who are charged with dog fighting should retain an experienced criminal defense and immigration attorney right away. The attorney may be able to negotiate with the prosecutor to get the charge either dismissed or reduced to a non-removable offense. Learn more about the criminal defense of immigrants in Nevada.

Depending on the circumstances of the case, defendants face misdemeanor or felony charges.[12]

Even though Nevada is a state built on gaming, Nevada dog racing laws prohibit betting on dogs. Conducting a dog race for the purpose of gambling is a misdemeanor, carrying: 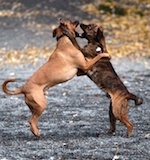 Under Nevada dog bite laws, it is a crime to knowingly keep a vicious dog for more than seven (7) days after having notice that the dog is vicious. A vicious dog is one that has:

Unlawfully keeping a vicious dog is a misdemeanor, carrying:

But if the vicious dog causes substantial bodily harm to another person, the dog's owner or keeper face charges for a category D felony, carrying:

The Nevada crime of conspiracy is when two or more people agree to commit a crime. Even if they do not succeed in carrying out the crime, they can still be convicted of conspiracy.

The penalties for conspiracy depend on the underlying crime that the alleged conspirators agreed to commit.[15]

If you have been accused of violating Nevada dog fighting laws under NRS 574.060 or 574.070, contact our Las Vegas criminal defense attorneys at 702-DEFENSE (702-333-3673) for a free consultation. Perhaps we can negotiate with the D.A. to get the charges thrown out or lowered. And if necessary we can take your case to a jury.

Also see our article about the Nevada crime of keeping a vicious dog (NRS 202.500).

Arrested in California? Go to our information page on California dog fighting laws.

Arrested in Colorado? Go to our information page on Colorado animal fighting laws.