Cocaine is a schedule II drug and is illegal throughout the United States. People face criminal charges in Nevada for either possessing, possessing with intent to sell, selling or manufacturing, or trafficking cocaine. Nevada also makes it illegal to be under the influence of cocaine even if the drug is no longer in the person's possession.

As with most narcotic offenses, cocaine crimes are charged as felonies in Nevada. In many cases, prosecutors are open to plea bargain the case down to a misdemeanor or even a dismissal. Otherwise, the possible penalties are the following:

Trafficking is any act involving at least 28 grams of cocaine, and the sentence turns on the quantity of ecstasy involved. For instance, it is a category C felony to traffic less than 200 grams of coke, and the penalty includes:

Every drug case is unique, and its individual circumstances dictate which defenses could be most useful. In general, the following arguments may be effective in getting a narcotic charge dismissed or reduced: 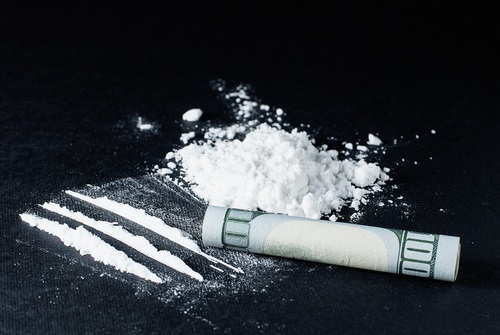 Cocaine offenses are prosecuted as felonies in Nevada.

1. What is cocaine, and is it illegal?

Cocaine is a schedule II drug that is typically snorted and therefore often sold as a powder. Common nicknames are coke, snow, and blow. Note that crack is a solid, smokable form of cocaine.1

Any action involving cocaine is prohibited in Nevada, including:

Note that trafficking cocaine is defined by Nevada law as any action involving at least twenty-eight (28) grams of the drug.5 So a person who owns 28 grams of coke can be convicted of trafficking even if that person has no plans to transport it or sell it. 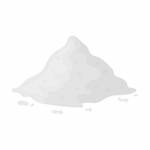 Cocaine is a Schedule II narcotic.

2. What are the penalties for Nevada cocaine crimes?

Note that drug crime penalties increase with each successive offense except for trafficking, which depends on the amount of cocaine involved:

Nevada law also prohibits the act of being under the influence of cocaine. The D.A. prosecutes it as a category E felony, carrying:

Note that courts usually grant probation in lieu of prison for a first-time conviction.6

3. What are the defenses to Nevada cocaine charges? 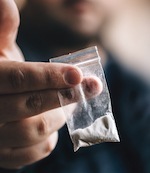 One possible defense to drug charges is police entrapment.

Which defense strategy to employ depends on the specific facts and evidence in the case. Three potential defenses are:

3.1. No knowledge of the cocaine

An element of drug possession offenses is that the suspect intended to possess the drugs.7Boulder City criminal defense attorney Michael Becker gives an example:

The D.A. in the above example has the burden to prove beyond a reasonable doubt that Jason knew about the cocaine. If the D.A. fails to meet this burden, Jason should not be convicted.

Police officers may be allowed to go undercover or lie to suspects, but they are not allowed to trick them into carrying out a crime that they are not predisposed to carry out.8 Bunkerville criminal defense attorney Michael Castillo gives an example of police entrapment:

Example: In Pahrump, an undercover police officer walks by a nightclub and sees Alvin snorting cocaine. The officer goes up to Alvin and says he wants to buy the rest of his coke. Alvin says no and that he does not deal. The officer then says he will tell the police about the coke if Alvin refuses to go through with the transaction. Alvin agrees, and the officer immediately cuffs him for selling cocaine. But Alvin should not be found guilty of selling drugs because the officer entrapped him through threats. The officer had no reason to believe Alvin was selling drugs, and the most he could have arrested Alvin for was simple possession.

If Alvin in the above example agreed right away to the officer's initial offer to buy the coke, then Alvin probably would not be able to claim he was entrapped. But because the only reason Alvin sold the drugs was that he was threatened, the case should be dismissed. 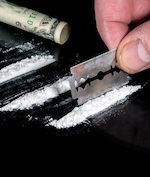 Drugs found as the result of an illegal police search may be excluded as evidence.

Whenever police may have executed an unlawful search and seizure, the defense attorney can then ask the court to disregard all the evidence that the police found through the illegal search.

Example: Officer Drew gets a search warrant to search Henry's apartment for cocaine. After the apartment search comes up with nothing, the officer breaks into Henry's office at work to search his desk, where he finds cocaine. After Henry is charged with cocaine possession, his attorney files a "motion to suppress" the cocaine as evidence. The attorney reasons that that Officer Drew illegally went outside the bounds of the search warrant by searching the office and not just the apartment. The judge agrees and excludes the cocaine as evidence, causing the D.A. to drop all charges now that they have no evidence to go on.

In the above example, it does not matter that Officer Drew's hunch about finding cocaine in Henry's office was correct. All that matters is that the officer went outside the bounds of the search warrant in order to find the cocaine. And because the search was illegal, Henry was able to get off the hook for drug charges.

4. Can I get my Nevada cocaine charge reduced or dismissed?

It is very possible, especially if the defendant has no or little criminal history. Some defendants are permitted to forgo jail by taking a drug education class or doing rehab (Drug Court), and the D.A. will dismiss the entire case once they successfully complete the course.

Another option is for the D.A. to reduce the defendant's felony charge down to the misdemeanor drug charge ITS (a.k.a. "drugs which may not be introduced into interstate commerce"). The ITS sentence may not exceed:

Note that jail is hardly ever imposed for ITS convictions.9

5. Can I go to trial on my Nevada cocaine case? 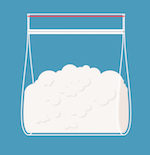 Most drug cases settle without a trial.

6. When can a Nevada cocaine case be sealed?

If the case gets dismissed, then there is no mandatory waiting period before the defendant may pursue a criminal record seal.11

If the cocaine charge gets knocked down to the misdemeanor drug offense of ITS (explained above in question 4), the defendant has to wait at least one (1) year after the case closes before pursuing a seal.12

In all other circumstances, the defendant will need to wait at least two to ten years before applying for a record seal. The exact waiting time hinges on which crime he/she was convicted of:

7. Can I get deported for a cocaine offense?

Yes. Any cocaine crime conviction -- even just personal possession -- is sufficient to get an alien deported from the U.S. Moreover, the U.S. may remove non-citizens just for admitting to being an addict or selling drugs whether or not a court convicts them.14

Immigrants who have been charged with a drug offense in Nevada are advised to seek legal counsel right away. A skilled criminal defense and immigration attorney may be successful in persuading the prosecutor to throw out the case or alter it to a non-deportable offense. Learn more about the criminal defense of immigrants in Nevada.

Heroin is a schedule I drug and carries the same penalty scheme as cocaine with the exception of trafficking. Learn more about Nevada heroin laws.

The law treats GHB and Rohypnol as schedule I narcotics whenever they are illegally possessed or sold. Penalties for GHB and Rohypnol crimes are the same as for cocaine except for personal possession and trafficking.

Methamphetamine is a schedule II narcotic. Penalties for meth crimes are the same as for cocaine. Learn more about Nevada methamphetamine laws.

Ecstasy is a schedule I narcotic. Drug crimes involving cocaine are punished the same as cocaine except for trafficking. Learn more about Nevada MDMA / ecstasy laws.

PCP (phencyclidine) is classified as a schedule II narcotic. Penalties for PCP crimes are the same as for cocaine. Learn more about Nevada PCP laws.

Ketamine is classified as a schedule III narcotic. Possession for personal consumption of ketamine is punished the same as for cocaine. But probation may be available for first-time convictions of possessing ketamine for sale or of selling ketamine. Note that Nevada law has no "ketamine trafficking" offenses. Learn more about Nevada ketamine laws.

Codeine is classified as a schedule II narcotic. Penalties for codeine crimes are the same as for cocaine. Learn more about Nevada codeine laws.

If you have been accused of a cocaine-related criminal offense in Nevada, phone 702-DEFENSE (702-333-3673) now. Our Las Vegas criminal defense lawyers can have a free consultation with you to discuss how we will fight to get your charges reduced or dismissed.

Arrested in California? Go to our informational article on California cocaine laws.

Arrested in Colorado? Go to our informational article on Colorado cocaine laws.

• Will I get deported for a “cocaine” charge in Nevada?


• When can I seal my “cocaine” case from my criminal records in Nevada?


• Can I keep my guns if I get convicted of “cocaine” charges in Nevada?


• Is it possible to win a “cocaine” case at jury trial in Nevada?


Are Nevada cops allowed to search my car for cocaine?


What happens if an undercover cop busts me for “selling cocaine” in Nevada?