NRS 200.450 is the Nevada law that prohibits people from challenging each other to a fight, or accepting a challenge to fight. This section makes it illegal if:

But it may be possible to get the charge dismissed or reduced to the lesser Nevada crime of breach of peace under NRS 203.010. Possible defenses to NRS 200.450 allegations include:

In this article, our Las Vegas criminal defense attorneys discuss the Nevada crime of "challenging to fight" under NRS 200.450. Click on a topic to jump to that section.

A Nevada charge of challenging someone to a fight may be reduced to breach of peace.

Challenging another person to fight is still illegal even if the fight never ends up taking place. And the challenge can take any form, such as through talking aloud or a written message. Henderson criminal defense attorney Michael Becker provides an illustration:

Accepting a challenge to have a fight is just as illegal in Nevada as making the challenge.

Example: Gregory is furious at Bill for cheating with Gregory's girlfriend. Gregory records a menacing video challenging Bill to a gunfight at Sunset Park at midnight. Gregory then instructs his brother Jack to go to Bill's house and play the video for Bill on Jack's iPhone. After Jack plays the video, Bill tells Jack that he will be there.

In the above example, it makes no difference that the challenge was recorded on video: Any verbal or written challenge to fight is illegal. Nor does it matter if the fight never takes place: It is against Nevada law merely to propose a fight, agree to a fight, or send a challenge to have a fight.1

Duels are antiquated types of pre-planned fights where the participants use either a:

The duels from yesteryear have been replaced by modern-day gang rumbles.

Traditionally, duels are attended by the participants' "seconds," a doctor, and spectators.2

1.2. "Challenges to fight" versus "breaching the peace"

Breaching the peace (a.k.a. disturbing the peace or disorderly conduct) encompasses various unlawful conduct, including "challenging to fight."3 So when police believe a challenge to fight has occurred, police must decide which crime to arrest the suspects for.

In practice, police arrest suspects for the lesser offense of breaching the peace when the "challenge to fight" is spontaneous and in the heat of the moment. If the challenge is premeditated and planned, then police are more likely to make an arrest under NRS 200.450.

2. Nevada penalties for "challenges to fight"

The punishment for violating NRS 200.450 depends on whether the fight involves the use of a deadly weapon.

If no deadly weapon is involved, a challenge to have a fight is a gross misdemeanor. The sentence is: 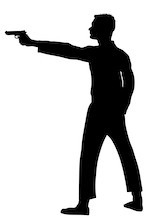 Challenging someone to fight is a Nevada felony if the case involves a deadly weapon.

If a deadly weapon is involved, a challenge to have a fight is a category B felony. The sentence is:

Examples of deadly weapons include guns, knives, or any other object that can be used to cause substantial bodily harm in Nevada. Fistfights are typically not considered deadly unless brass knuckles are used.

If the fight occurs and someone dies from it, the perpetrator would then faces charges for the Nevada crime of murder under NRS 200.030. It makes no difference whether or not the fight was officially a "duel."4

If a felony violation of NRS 200.450 involved gang activity, then the judge will add an additional penalty of one to twenty (1 - 20) years in prison. However, this sentence enhancement may be no longer than the underlying sentence.

Example: Claude is a member of the Bloods, and he receives a five-year prison sentence for making a knife-fight challenge to the Crips. Since the challenge was made in connection to gang activity, the judge may increase the sentence by up to an additional five years.

Note that a gang-enhancement sentence must run "consecutively" with the underlying sentence; this means that the sentences must run one after the other, not concurrently. Therefore, Claude in the above example would serve ten years total if the judge imposes a five-year enhancement.5

Learn more about gang sentence enhancements in Nevada under NRS 193.168.

2.2. Breach of peace as a plea bargain 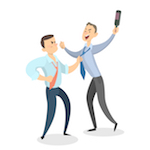 Breach of peace is only a misdemeanor in Nevada.

Breaching the peace can serve as a favorable Nevada plea bargain for defendants initially charged with "challenges to fight." Disturbing the peace is only a misdemeanor in Nevada, carrying a penalty of:

A breach of peace conviction can also be sealed from the defendant's criminal record more quickly than a challenge to fight conviction (scroll down to section 4 for more information).

3. Defenses to Nevada charges of "challenges to fight"

There are various possible defense strategies to counter NRS 200.450 allegations depending on the circumstances of the case. Possible defenses include:

If the fight ends up taking place, note that it is not a defense to argue that the defendant was acting in self-defense or was standing his/her ground. Learn more about Nevada self-defense laws.7

It is also not a defense to argue that NRS 200.450 is unconstitutional for being vague or overbroad.8

The waiting period for sealing an NRS 200.450 case from a defendant's criminal record depends on what the defendant was ultimately convicted of:

Category B felonies typically carry only a five-year record seal waiting period; however, it is extended to 10 years in NRS 200.450 cases because challenging someone to a fight is considered a "crime of violence." 9

Challenging someone to fight could be deportable.

Immigration judges may find that challenging someone to a fight is a deportable offense, especially if firearms were involved.10 Therefore, non-U.S. citizens who are facing charges of violating NRS 200.450 are advised to seek legal counsel as soon as possible.

An experienced immigration and criminal defense attorney may be able to persuade the prosecutor to reduce the charges to a non-deportable offense. Learn more about the criminal defense of immigrants in Nevada.

The Nevada crime of battery under NRS 200.481 is any intentional and unlawful use of physical force on another person. Common examples include kicking, biting, punching, throwing objects act, or poisoning.

Battery can be a misdemeanor or a Nevada felony depending on the seriousness of the situation.

Assault is intentionally placing another person in apprehension of being immediately touched in an unlawful way. In other words, assault is an attempted battery.

Like battery, assault can be a misdemeanor or a felony depending on the circumstances of the case.

The Nevada crime of hazing under NRS 200.605 occurs when someone imposes physical brutality on an initiating or current member of a school club, such as a fraternity. Similar to challenges to fight, hazing is still illegal even if the victim agrees to be hazed.

Hazing is punished as a misdemeanor or a gross misdemeanor depending on whether the victim sustained substantial bodily harm.

We will fight to keep you out of jail and to convince the D.A. to reduce or dismiss your charges. And if the case goes to trial, we will present the best defense available in pursuit of a "not guilty" verdict.

Having a criminal record can cause people to lose out on valuable employment and educational opportunities. Therefore, defendants are always advised to seek advice from an attorney on how to fight their charges to keep their record clean.