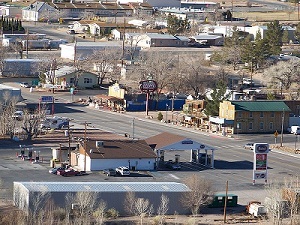 Located midway between Las Vegas and Tonopah, the population of Beatty, Nevada, is only a thousand people. But its location off the US 95 and proximity to Death Valley keep its police busy flagging down alleged violators of Nevada DUI law and Nevada traffic ticket law. Scroll down for Beatty Court and Jail information.

Beatty Justice Court has jurisdiction over all Nevada misdemeanor and Nevada felony matters prosecuted within the town limits. But note that felony cases which remain unresolved by the case's Nevada preliminary hearing stage will be "bound over" (which means transferred) to Nye County's Fifth Judicial District Court in Tonopah, Nevada.

For more detailed information about Beatty Justice Court including phone numbers, hours of operation, and methods to pay fines, go to our Beatty Court Information Page

An arrest is only the start of case, and it does not guarantee a conviction. Our Beatty criminal defense attorneys pool our decades of combined experience to attempt to get your charges reduced or dropped altogether. If you have been arrested for a criminal offense in Beatty, phone our Nevada criminal defense lawyers at 702-DEFENSE (702-333-3673) for a free meeting.