Nevada law defines "assault with a deadly weapon" as using a gun, knife, or other lethal objects to place a person in reasonable fear of immediate bodily harm. Common scenarios include:

But it may be possible to plea bargain the charge down to a full dismissal or simple battery, which is only a misdemeanor.

It may be possible to fight Las Vegas NRS 200.471(2)(b) charges by claiming one or more of the following defenses:

As long as the D.A. lacks sufficient evidence to prove guilt beyond a reasonable doubt, the charge should be dismissed.

In this article our Las Vegas criminal defense lawyers discuss: 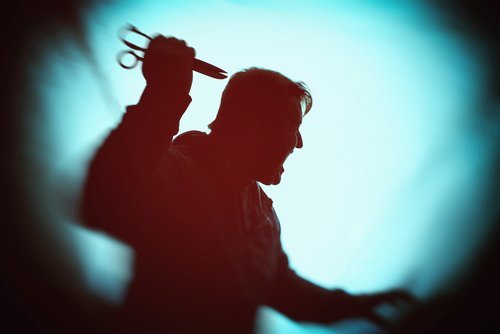 "Assault with a lethal weapon" is a felony in Nevada.

1. What is "Assault with a Deadly Weapon" in Las Vegas, Nevada?

The crime of assault does not require actual physical touching. If there is touching, it would then be the Nevada crime of battery. Instead, assault is like an attempted battery where the suspect intentionally acts in a way that causes the alleged victim reasonable apprehension of being unlawfully touched in the immediate future.

A common example of assault includes deliberately holding up a fist to someone in a way that would make the person think he/she is about to be punched. Even using fighting words like, "I am gonna break your arm right now" may qualify as assault under certain circumstances.2

Like it sounds, deadly weapons comprise the following kinds of devices:

Therefore, lethal weapons comprise not just guns or knives. They also may include normally innocuous objects like pipes, scissors, or bricks that could be used in a deadly way.3

1.3 Definition of "Assault with a Deadly Weapon"

Therefore, "assault with a deadly weapon" includes situations where a defendant does not necessarily use or brandish the weapon. Simply having the weapon on his/her person or within reach during the assault would qualify as assault with a fatal weapon. North Las Vegas criminal defense attorney Michael Becker gives an example:

Example: Butch suspects Greg is fooling around with his girlfriend. Butch finds Greg in the Hard Rock Hotel and holds his fist up next to his face. Butch is also carrying a hunting knife on his belt. A security guard witnesses this encounter and calls the Las Vegas Metropolitan Police Department, who then arrest Butch and book him at the Clark County Detention Center. Butch faces NRS 200.471(2)(b) charges because he put Greg in reasonable anticipation of being battered by holding up his fist and having a knife within reach.

2. What are defenses to "assault with deadly weapon" charges in Nevada?

Depending on the case, there may be various effective strategies a Las Vegas criminal defense attorney could use that could raise a reasonable doubt and preclude a guilty verdict. Typical defenses include:

Note that it is not a defense if no one was hurt or physically touched.

2.1 The defendant had no criminal intent

Assault is an intent crime in Nevada.5 This means a defendant can be convicted only if he/she intended to act in a way that caused someone else to feel reasonable apprehension of being battered.

Example: Jack is openly carrying a dirk on his belt. While walking down the street, he trips and falls, causing his knife to detach and fly towards another pedestrian. The pedestrian feared that the knife would strike him. But since Jack had no intention to put the pedestrian in apprehension of immediate bodily harm, Jack is not criminally liable for assault with a fatal weapon.

Accidents do not count as assaults. As long as the state's evidence fails to demonstrate that the defendant had intent, then the case should be dismissed.

2.2 The accuser lacked reasonable apprehension of being hurt

Assault by definition is intentionally acting in such a way that puts someone else in reasonable apprehension of immediate bodily harm.6 So if the criminal defense attorney can show that the alleged victim's fear was unreasonable or that the bodily harm threatened was not immediate, then the case should be thrown out. Henderson criminal defense attorney Neil Shouse provides an illustration:

Example: Kyle is openly carrying a pistol on his belt when he walks into a Mesquite 7-11 to buy a snack. Another patron sees the pistol and shrieks, fearful that Kyle is about to shoot her. The police come and book Kyle at the Mesquite Jail. However, prosecutors decline to press charges because they believe the patron's fear of being hurt was unreasonable.

In the above example, Kyle was allowed to openly carry the pistol at the 7-11, and nothing he did was suspicious. So even though the patron may have genuinely been scared upon seeing the gun, Kyle committed no crime.

2.3 The defendant acted in self-defense

Nevada self-defense laws permit a person to defend him/herself against immediate bodily harm as long as he/she does not fight back with any more force than necessary.7

Example: Harry sees Greg on the street, who owes him money. Harry calls to Greg, holds up his fist and threatens to "beat in his face" if Greg does not pay him back. In response, Greg produces his pocketknife and holds it up. In this situation, Greg displaying the pocketknife is an act of lawful self-defense in response to Harry's threat to punch him.

Since Harry in the above example started the fight by assaulting Greg with his fist, Greg was justified to protect himself by holding up his weapon. The fact that Greg merely displayed the knife and did not try to use it demonstrates that Greg was acting in a measured way and did not use more force than necessary to deflect Harry's threat.

This consent defense usually comes into play in the arena of sports such as boxing or fencing where physical contact is part of the game. If the criminal defense attorney can show that the accuser somehow consented to be assaulted, then the assault charges will not stand.

2.5 The defendant did not use or have a lethal weapon

If the prosecution cannot show that a lethal weapon was used or was available to be used, the NRS 200.471(2)(b) charge should be dismissed or reduced to simple assault (which is only a misdemeanor).

Example: Lisa and Julia get into a verbal argument. At one point, Lisa screams, "I am gonna to kill you!" Julia notices a bulge in Lisa's pocket, which Julia presumes is a pistol. Julia calls the police and claims that Lisa committed assault with a deadly weapon on her. But when police arrive and realize that the only objects in Lisa's pocket were her keys and phone, the police decline to arrest her for anything.

Note that had Lisa in the above example held up her fist or attempted to throw a punch, she could be liable for simple assault.9

3. What are the penalties for "assault with a deadly weapon" in Nevada?

This penalty remains the same whether or not the assault was against a "protected class" such as police officers. Nor does it matter whether the defendant was a prisoner or someone currently on parole or probation in Nevada.10

3.1 Plea bargains for "assault with a lethal weapon" in Nevada

Depending on the case, a Las Vegas criminal defense attorney may be able to persuade the prosecutors to reduce a Nevada NRS 200.471(2)(b) charge down to:

All of these offenses are only misdemeanors. The standard sentence includes:

4. Can I get my Nevada conviction for assault with a deadly weapon sealed?

A Nevada conviction for violating NRS 200.471(2)(b) may be sealed five (5) years after the case ends. But if the case gets reduced or dismissed, then the waiting period decreases significantly:

5. Can I get deported for assault with a deadly weapon?

Yes. Any gun-related conviction carries the risk of deportation for non-citizens.17

Immigrants who are charged with a crime in Nevada should retain an attorney right away. The D.A. may be willing to negotiate the charges down to a non-deportable offense or dismiss them completely. Learn more about the criminal defense of immigrants in Nevada.

When a defendant uses or carries a lethal weapon while executing a crime, the court will increase the sentence by one to twenty (1 - 20) years. But this added sentence may not exceed the sentence for the underlying crime...

So for example, if a defendant is sentenced to 7 years in prison for armed robbery, the additional sentence can be no more than 7 years for a total sentence of 14 years.

Learn more about increased penalties for using a firearm in the commission of a crime in Nevada.18

It is against Nevada law for people who have been convicted of felonies to possess guns. Being an ex-felon in possession of a firearm in Nevada is a category B felony, carrying:

It is a misdemeanor to draw or wave a gun in a threatening or provocative manner. Brandishing a firearm carries:

If you have been charged with assault or any other crime in Nevada, then call our Las Vegas criminal defense lawyers at 702-DEFENSE (702-333-3673) today for a free phone meeting. We will do everything possible to try to get your case reduced to lesser charges or dismissed so your criminal record stays clean.

Arrested in California? Go to our information page on California assault with a deadly weapon.

Arrested in Colorado? Go to our information page on Colorado Assault and Menacing crimes.