Most law-abiding adults are eligible to get a carrying concealed weapons permits (CCW) in Nevada. It is illegal throughout the state to carry a concealed handgun without a permit.

The requirements for getting a CCW permit in Nevada are:

In this article, our Las Vegas CCW attorneys answer frequently-asked-questions about how to obtain a carrying concealed firearms permit in Nevada. Click on a topic to jump to that section: 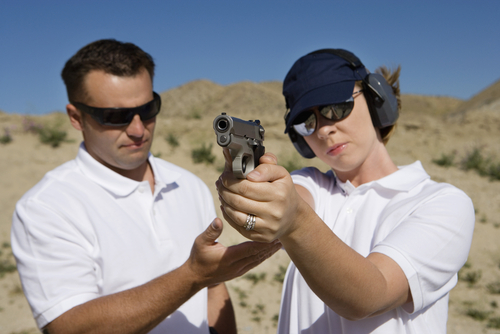 Nevada requires people to obtain a valid CCW permit before they may carry a concealed firearm.

1. What is a "concealed firearm" in Nevada?

A “concealed firearm” is a handgun (whether loaded or unloaded) carried upon a person in such a manner as not to be discernible by ordinary observation.1 This includes handguns hidden inside an article of clothing or in a backpack, purse or other item you are carrying.

Carrying a concealed a firearm without a permit is a felony in Nevada.

2. Am I eligible for a concealed firearms permit in Nevada?

You may obtain a concealed carry permit in Nevada if:

Your CCW application may be denied (or your existing permit revoked) if:

You are not entitled to a refund of your CCW permit application fee if you are denied. But you have the right to appeal a denial.

3. How much does a Nevada CCW permit cost?

The cost of a concealed carry permit depends on where in Nevada you are applying and whether you are seeking a new permit or renewal. In Las Vegas, the non-refundable application fees are:

This does not include the cost of any of the required firearms training course or necessary documentation.

4. How long does it take to get a CCW permit in Nevada?

It may take up to 6 months to get a CCW permit in Nevada.

If you are applying for a renewal permit, make sure to apply at least 120 days before the expiration of your current permit in order to avoid late fees. You may begin the renewal process at any time, but no credit will be provided for unused time.

Note that you are required to take a refresher firearm qualification course and resubmit a complete application packet in person to obtain a license renewal. Your renewal application will also require new photos and fingerprints.

5. How long is a Nevada CCW permit good for?

Nevada CCW permits remain valid for a period of five (5) years unless revoked.

6. How do I apply for a concealed firearm permit in Nevada?

You can obtain a Nevada CCW permit application packet from your nearest sheriff's or police station.

In Las Vegas, the Las Vegas Metropolitan Police Department issues CCW permits. You can obtain a Las Vegas CCW permit application online or from your nearest LVMPD substation. Reno residents must obtain their CCW permits from the Washoe County Sheriff.

Complete the application but do not sign the form until instructed to do so. Completed (but unsigned) applications with supporting documents must be turned in to the sheriff or police in person.

Residents of Clark County can submit their application to the Fingerprint Bureau of the LVMPD during normal business hours: Monday – Friday, excluding holidays, from 8:00 am – 5:00 pm. The LVMPD's fingerprint bureau is located at:

In Reno and elsewhere in Washoe County, CCW applications are accepted Monday through Friday, 7:30 a.m. to 3:30 p.m. at: 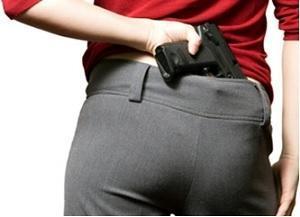 People may apply for CCW permits in Nevada through their local sheriff's office.

You will need to bring the following with you:

Photocopies will not be accepted.

You are required to carry your CCW permit and proper identification whenever you are in actual possession of a concealed firearm. You must present your ID and CCW if a peace officer requests it. Not doing either will subject you to a civil penalty of $25.4

7. Is my out-of-state concealed weapon permit valid in Nevada?

If someone moves to Nevada with a reciprocal out-of-state CCW permit, he/she may use that permit for only the first sixty (60) days of living in-state. Afterward, he/she would need to get a new CCW permit issued from his/her local sheriff's office in Nevada.5

Before using a Nevada CCW permit in another state, check with that state's own department of public safety.

8. What is the penalty for carrying a concealed gun without a permit in Nevada?

Carrying a concealed handgun in Nevada without having a valid CCW permit is a category C felony, carrying:

Recall that a person who has a valid CCW permit but forgets to bring it while carrying a concealed firearm faces a $25 fine.

Need an attorney in Nevada? Call us...

If you or someone you know has been charged with a violation of Nevada's concealed carry laws, our Las Vegas criminal defense attorneys want to help. We will fight to preserve your second amendment rights and to keep you out of jail.

Also see our articles on 3 steps to buying a gun about carrying concealed in casinos.

Learn about how to get a CCW permit in California.