Our attorneys bring more than 100 years of collective experience. We fight all criminal charges, including battery domestic violence, grand larceny, assault and battery in Nevada, solicitation for prostitution, casino markers and drug charges.

With our own in-house private investigator, we take an aggressive and proactive approach to every case from the very first moment. This has allowed us to secure countless "not guilty" verdicts at jury trial . And case dismissals short of trial. Even in the most difficult cases.

We may be able to help you avoid jail time. And possibly get the charges reduced or dismissed altogether.

SEE WHAT CLIENTS ARE SAYING ABOUT US

Hire the Law Firm That Nevada Cops Themselves Use

More so than anyone, the police know which criminal defense lawyers are top-notch. So who do Nevada officers go to when they themselves get in trouble? They come to us.

Nevada Association of Public Safety Officers (NAPSO) is the state's largest peace officer association. NAPSO selected one criminal defense firm to contract with to defend any of its members who face investigation or charges. They chose us. 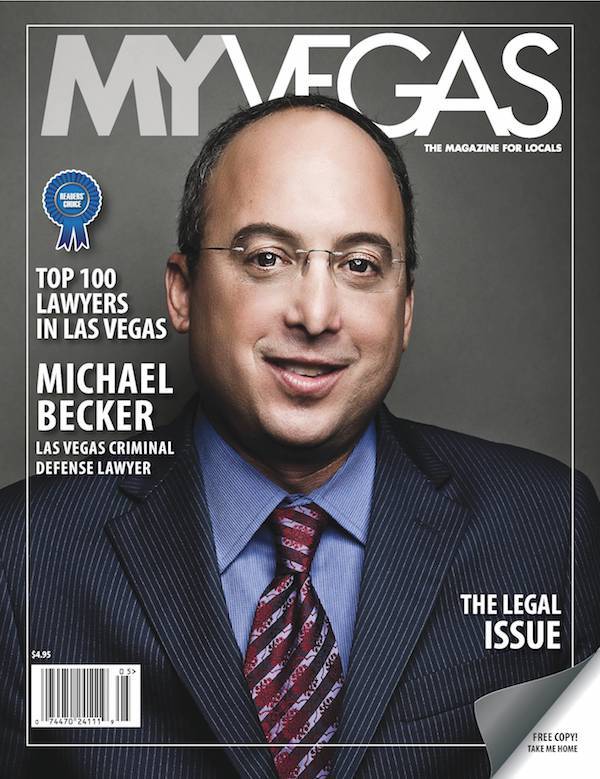 Las Vegas criminal defense attorney Michael Becker has a long track record of winning dismissals and "Not Guilty" verdicts. Even in the most serious felony trials. He achieved full acquittals at jury trials for rape, felony child abuse, attempted murder, forgery, mayhem, assault and battery, solicitation for prostitution and trespassing. He has been named to many "top attorney" lists. He appears as a legal expert for local and national media.

We defend clients against all misdemeanor and felony charges. Some of the most common cases we take include:

DUI / DWI / Drunk Driving: It may be possible to avoid a DUI conviction and a driver's license suspension. Even if you were arrested and even if your BAC reads over the .08 limit. Our Las Vegas DUI defense lawyers understand Nevada DUI laws inside and out. We can put the case under a microscope. We find where the police and crime lab went wrong. And use these defenses to your advantage.

Solicitation for prostitution: Prostitution is legal in licensed brothels in some Nevada counties. But it is a crime in Las Vegas. Nevertheless, if you got arrested for a first offense solicitation of prostitution charge, we can often get the charge reduced or dismissed through a diversion program.

Sealing Nevada criminal records. A conviction in this state gives you a criminal record that can haunt someone when applying for a job, a loan or a state license. But we can help you seal and clear your criminal record, giving you a clean slate and a better chance in life.

Statutory rape. Sixteen-years-old is Nevada's age of consent. With some exceptions, people who have consensual sex with children under 16 face charges for the Nevada crime of statutory sexual seduction (NRS 200.368). That is the legal term for statutory rape. But if we can raise a reasonable doubt that any sex occurred, the charge should be dropped.

Is your loved one is being held at a local Nevada jail? Our criminal attorneys can assist you with Nevada bail and inmate release information, locating a Las Vegas bail bonds agent, and devising the best strategy to get the person released quickly. In addition to the Clark County Detention Center (Las Vegas Jail), we can assist you at the Henderson Jail, the Reno Washoe County Jail, the Mesquite Jail, the Laughlin Jail and the North Las Vegas Jail.

Absolutely. All our our attorneys and staff are still available 24-hours a day, 7-days a week. To safeguard everyone's health, we are conducting consultations by phone or video-conferencing. And for people laid-off or furloughed, know that we offer flexible rates and payment plans.

Do I need a lawyer if I'm arrested in Las Vegas?

Some defendants do represent themselves in court. But it is always advisable to have an experienced lawyer, even for a first time arrest. Prosecutors may be more apt to negotiate a charge reduction or dismissal when the defendant is represented.

The Nevada legal system is complicated and intimidating, and criminal defense attorneys give defendants the best chance of achieving a favorable resolution.

What if I can't afford an attorney?

Nevada courts assign public defenders to defendants who cannot pay for private counsel. However, these defendants should consult with a criminal defense attorney first to inquire about discount rates and payment plans. Defendants often stand a better chance of winning their case if they are represented by private counsel, who have more time and resources than public defenders.

Can a lawyer appear on my behalf in court?

Defendants facing misdemeanor charges in Nevada usually never have to go to court as long as their attorney appears on their behalf. In felony cases, whether the defendant must show up depends on the charges and the individual judge. Should any case reach trial, the defendant would need to appear personally.

How do I get a copy of the police report?

Criminal defense attorneys can always obtain police reports for their clients. Otherwise, defendants can request the report directly from the police department. For the Las Vegas Metropolitan Police Department (LVMPD), people can request reports online or in person.

Can I get my record sealed?

Defendants must formally petition the court for a criminal record seal in Nevada. Most misdemeanor convictions are sealable one year after the case ends. Misdemeanor DUI convictions require a seven-year waiting period. Any charge that gets dismissed may be sealed right away, and certain serious felonies must remain on the record forever.

What are common defenses to a criminal charge?

Depending on the specific charge, defendants may be able to claim such defenses as:

Typical evidence in criminal cases includes eyewitness accounts, surveillance video, and written communications. If the defense attorney can raise a "reasonable doubt" as to the defendant's guilt, the prosecutor may reduce or drop the charge.