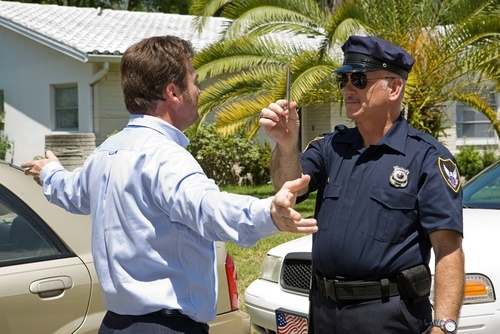 Below is the instruction given by the

Nystagmus refers to a jerking of the eyes. Several different kinds of Nystagmus exist, some of them influenced by alcohol. The test you give at roadside in a DUI investigation is a test of "horizontal gaze nystagmus"-the nystagmus that occurs when the DUI suspect's eyes gaze to the side. Many people will show some jerking if the eyes move far enough to the side. When a driver is intoxicated, however, three signs will be observed:

Since the degree of impairment is indicated by the angle at which nystagmus begins, you will have to learn how to estimate this angle, particularly the 45-degree angle, since that is the crucial marker for estimating BAC.

Practice examining the eyes of several people, so that you can become familiar with what a 45-degree angle of gaze looks like. Next, practice without the device, but check your estimates periodically.

Practice until you can consistently estimate 45 degrees. Check yourself monthly with the device to be sure that your accuracy has been sustained.

How to Administer the Horizontal Gaze Nystagmus Test:

I AM GOING TO CHECK YOUR EYES. (Request that the DUI suspect remove glasses or hard contact lens at this time if they are being worn. Nystagmus is not influenced by how clearly the suspect can see the object he is to follow.) NOW KEEP YOUR HEAD STILL AND FOLLOW THIS (indicate what he is to follow) WITH YOUR EYES. DO NOT MOVE YOUR EYES BACK TO THE CENTER UNTIL I TELL YOU. (If the DUI suspect moves his head, use a flashlight or your free hand as a chinrest.)

If the DUI suspect's eyes start jerking before they reach 45 degrees, check to see that some white of the eye is still showing on the side closest to the ear, as in the photograph. If not white of the eye is showing, you either have taken the eye too far to the side (that is, more than 45 degrees) or the person has unusual eyes that will not deviate very far to the side. Use the criteria of onset before 45 degrees only if you can see some white at the outside of the eye.

Repeat this entire procedure for the DUI suspect's left eye. When observing the left eye at 45 degrees of gaze, some white of the eye again should be visible at the outside (closest to the ear) of the eye.

NOTE: Nystagmus may be due to causes other than alcohol in three of four percent of the population. These other causes include seizure medications, phencyclidine (PCP), barbiturates and other depressants. A large disparity between the performance of the right and left eye may indicate brain damage.

Watch for three signs of intoxication in each eye. Give one point for each item checked for a maximum of six points.

If the DUI suspect scores four or more points out of the six possible points on this test, classify his BAC as above 0.10 percent. Using this criterion you will be able to correctly classify about 77 percent of you suspects with respect to whether they are drunk driving. That probability was determined during limited laboratory and field-testing and is given simply to help you weigh the various sobriety tests in this battery as you make your arrest decision.