Are “Fireworks” illegal in California? A former DA explains the law

Are fireworks legal or illegal in California? In this video, a former Los Angeles prosecutor explains the law. Fireworks marked “safe and sane” may be sold between June 28 and July 6 but may never be sold to a minor under 16 years old. Different cities have different rules for when, where and if safe and sane fireworks may be lit and used. Then there is a category of fireworks called “dangerous fireworks.” These include bottle rockets, firecrackers, M80s and sparklers longer than 10 inches. It is illegal to use — or even to possess — dangerous fireworks without a permit. A conviction for fireworks offenses is usually a misdemeanor that that can carry a penalty of up to 6 months in county jail. More info at http://www.shouselaw.com/fireworks.html or call (888) 327-4652 for a free consultation. If you or a loved one is charged with a crime we invite you to contact us at Shouse Law Group. We can provide a free consultation in office or by phone. We have local offices in Los Angeles, the San Fernando Valley, Pasadena, Long Beach, Orange County, Ventura, San Bernardino, Rancho Cucamonga, Riverside, San Diego, Sacramento, Oakland, San Francisco, San Jose and throughout California.

"Dangerous" fireworks include large items such as rockets and sparklers bigger than ten inches in length or one-quarter inch in diameter.

"Safe and sane" fireworks include small items such as fountains, spinners, and snap caps. The Office of the California State Fire Marshal puts a list on its website of fireworks that meet this definition.

What fireworks are illegal in California?

Dangerous fireworks are always illegal in California except when used by someone with a special display license. These licenses are typically issued only to pyrotechnic operators who put on Fourth of July and other holiday displays.2

Fireworks that are legal in California

Subject to local restrictions, safe and sane fireworks may be sold, purchased, and used by the general public. But only licensed retailers can sell them and they can do so only from June 28 to July 6 each year.3

Is it legal to give fireworks to a minor in California?

Someone who does either of these things can be charged with the California misdemeanor crime of furnishing dangerous fireworks to a minor.

Examples of illegal fireworks use

Examples of uses that violate California's illegal fireworks laws include:

Penalties for illegal fireworks in California

Most violations of California's fireworks laws are misdemeanors. Penalties can include:

But possession of large quantities of dangerous fireworks can be charged as a California felony. Punishment for a felony fireworks violation can include:

California legal defenses to fireworks charges include taking the position that: 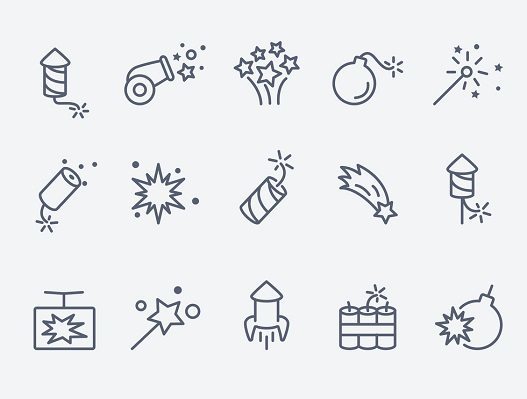 California has separate rules for "dangerous fireworks" and "safe and sane" fireworks."

1. What is the Difference between Illegal "Dangerous" Fireworks and Legal "Safe and Sane" Fireworks in California?

Dangerous fireworks may generally be possessed and used solely by people with a special display license.

Safe and sane fireworks may be purchased and used by the general public if permitted by local fire codes and subject to strict restrictions.

Many jurisdictions prohibit the use of fireworks

Many local jurisdictions -- particularly in urban areas -- prohibit the use of any (or almost any) fireworks within their borders.

For instance, ALL fireworks other than small "snap caps" and "party poppers" are illegal in unincorporated areas of Los Angeles County. Other items may be used only by people with a valid display permit. (See Los Angeles Fire Code, Title 32, Section 5601.3).

People are advised to check with their local fire department before purchasing or using any fireworks, especially if the weather has been very dry.

This information can change rapidly so checking immediately before use is advised.

The definition of "fireworks" under California law

The term 'fireworks kits' is defined under California Health and Safety Code 12512. It refers to:

1.1. What is the definition of "dangerous" and "exempt" fireworks?

California Health and Safety Code 12505 HS lists "dangerous" fireworks. Simply put, buying and/or using dangerous fireworks is always illegal other than by someone with a "special display license".9

Examples of "dangerous" fireworks include: 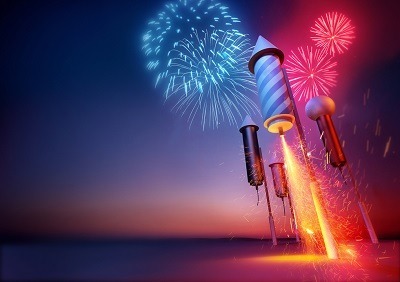 So-called "dangerous fireworks" may only be sold or possessed by people with California fireworks licenses.

Another type of fireworks in California is "exempt" fireworks. These are fireworks that the State Fire Marshall has determined to be limited to:

This class of fireworks requires a special Pyrotechnic Operator's License for possession or use.11

1.2. What is the definition of "safe and sane" fireworks?

California Health and Safety Code 12529 HS describes "safe and sane" fireworks. These are defined as any fireworks that haven't been classified as "dangerous" or "exempt".12 These fireworks typically comply with California's fireworks laws.

But even "safe and sane" fireworks may only be sold:

An exception to the above rules is "party poppers" and "snap caps." These small items may be sold year round.

Party poppers and snap caps are small containers that make a small popping sound and shoot out confetti or streamers. They are popular novelty items for children's parties and other events.

How do I know whether fireworks are safe and sane?

All "safe and sane" fireworks must display a "State of California, State Fire Marshall Registered Fireworks" seal. If they do not, they are illegal fireworks in California.

Before using fireworks, people should call or visit the website of their local fire department (such as the Los Angeles Fire Department or the San Bernardino Fire Department). Local fireworks departments welcome inquiries about local restrictions. 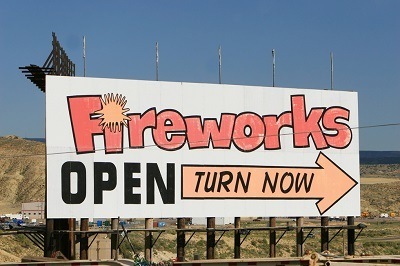 2. What are the Major California Fireworks Laws?

2.1 What is the California crime of HS 12677 possessing illegal fireworks?

California Health and Safety Code 12677 HS makes it a crime to possess dangerous fireworks without a valid permit to do so.36

HS 12677 does not apply to possession of "safe and sane" fireworks. Unless prohibited by a local fire code, possessing these is typically legal.

But causing damage or injury with otherwise legal fireworks might violate another law, such as:

2.2. What is the California crime of HS 12676 selling or transferring illegal (dangerous) fireworks?

Health and Safety Code 12676 HS makes it illegal to do any of the following:

California fireworks laws also ban advertisements to sell or transfer any kind of fireworks by anyone who does not hold a valid license or permit to do so.39

And importing, selling, or advertising any fireworks that haven't been approved by the California State Fire Marshall is also unlawful.40

2.3. What is the California crime of furnishing fireworks to a minor?

California Health and Safety Code 12689 makes it a crime:

Also, minors are not permitted to possess even "safe and sane" fireworks without the written consent or physical presence of a parent.42

Minors with such permission may lawfully possess fireworks in California. But parents are responsible for any injuries or damage that their children cause. 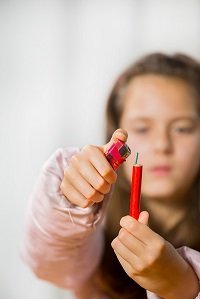 Furnishing dangerous fireworks to a minor is another way to violate California's fireworks laws.

2.4. What is the California crime of HS 12672 selling "safe and sane" fireworks outside the authorized time period?

Health & Safety Code 12672 HS makes it a crime to sell, or offer for sale, such fireworks anytime outside of the authorized time period for selling fireworks.

2.5. What is the crime of HS 12680 discharging dangerous fireworks where injury to another person is likely?

Certain people are exempted from the restrictions of HS 12680. These include:

3. How Can I Fight California Illegal Fireworks Charges?

The best legal defense to California fireworks charges depends on the charges and the circumstances of the case. But it often includes establishing that the defendant was not the one who sold or possessed the fireworks.

"Sometimes our client was the victim of mistaken identity and someone else actually possessed or sold the illegal fireworks. The prosecution bears the burden of proving possession beyond a reasonable doubt. If our client didn't have control over the fireworks, he or she didn't violate California's fireworks laws."

Other defenses to California fireworks charges include taking the position that: 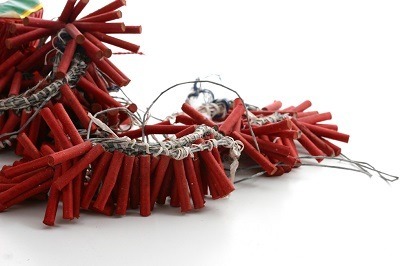 4. What are the Penalties for Illegal Fireworks in California?

Possessing a large quantity of illegal dangerous fireworks (for any reason) increases criminal penalties in California.

25 to 100 pounds of dangerous fireworks

Possession of 25 to 100 pounds of dangerous fireworks in California is a misdemeanor. It can be punished by:

Possessing 101 to 5,000 pounds of dangerous fireworks is a wobbler offense in California. A "wobbler" is a charge that prosecutors may file as either a misdemeanor or a felony, depending on

Misdemeanor punishment for unlawful possession of over 100 pounds of fireworks can include:

As a felony possessing more than 100 pounds of dangerous fireworks possession can be punished by:

Over 5,000 pounds of dangerous fireworks

Possessing more than 5,000 pounds of illegal fireworks is also a wobbler offense. As a misdemeanor, it can be punished by:

As a felony, possession of more than 5,000 pounds of dangerous fireworks offense carries potential penalties of: 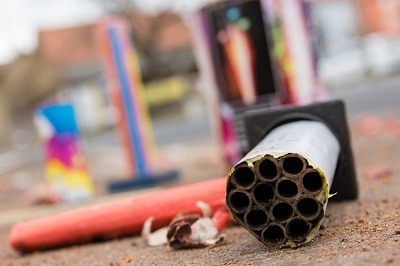 Possessing dangerous fireworks can be a felony in California if sufficient quantities are involved.

Selling, giving or delivering dangerous fireworks to a minor is a misdemeanor. It can be punished by the same penalties as set forth above (depending on the quantity).

But a second or subsequent violation will result in an additional $5,000 fine and up to another year in jail.49

And--unlike many other laws--a separate violation of California's fireworks laws can be charged for each day that someone commits, continues, or permits a violation.50

The above penalties do not apply to people who hold valid licenses or permits and who are operating within the scope of those permits/licenses.51

But someone who operates outside the scope of a permit/license can be convicted of selling illegal fireworks. Plus the State Fire Marshal will revoke the permit or license.52

A commercial driver who is convicted of transporting at least 10,000 pounds of dangerous fireworks will lose the right to operate a commercial motor vehicle for three years.

This penalty does not apply to drivers who are acting within the scope of a valid fireworks license or permit.53

The following items are not included in the definition of fireworks under California law:

If someone causes a fire as a result of using illegal fireworks, prosecutors might also charge:

But an experienced California defense attorney may be able to persuade the prosecutor to reduce the charge pursuant to a plea bargain.

Possible plea bargains to these more serious offenses include:

Charged with a fireworks crime in California? Call us for help...

If you or loved one has been charged with a fireworks offense, we invite you to contact us for a free consultation.

Call us at 855-LAWFIRM or fill out the form on this page to speak to a knowledgeable California criminal defense attorney in your area.