Does a DUI Disqualify a Person from Global Entry? 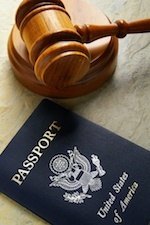 If a person is arrested or convicted of driving under the influence (DUI), one result is that he/she could be disqualified from global entry into United States airports.

Global entry is a program of the U.S. Customs and Border Protection service (“CBP”). It allows certain travelers to receive expedited clearance once they arrive into certain U.S. airports.

A DUI arrest and a DUI conviction show up on a person's criminal record. Once personnel from CBP view this information on a person's record, they may use it as grounds to disqualify a person from the global entry program.

This may even be the case if a person has a DUI conviction expunged, or dismissed.

How does a DUI affect a person's global entry status?

As stated above, global entry allows expedited, or quickened, clearance for pre-approved, low-risk travelers upon entry into certain U.S. airports. As of October 2017, global entry was available at 54 U.S. airports; and, more than 1.8 million people were enrolled in the program. CBP receives approximately 50,000 new applications for the program every month.

Please note that an arrest for DUI, or a conviction of the same, gets reported to the California Department of Justice (“CDOJ”). This information gets recorded onto a person's criminal record and the CDOJ also enters the information into national databases. Agents from CBP will search these databases when reviewing a person's global entry application, or application renewal. If the agents see a DUI arrest or a DUI conviction in the databases (i.e., on the person's criminal record), they can use this information to cancel or prohibit global entry status.

Some people can get a DUI offense expunged. Expungement is a court-ordered process in which the legal record of an arrest or a criminal conviction is sealed, or dismissed under the law.

While expungement may remove evidence of a DUI arrest or conviction from a person's criminal record, the expungement is not always communicated to the CDOJ. If not communicated, this means CBP personnel will still see an arrest/conviction on a person's record and could use it to cancel or prohibit global entry status.

California Vehicle Code 23152(a) is the California statute that makes it a crime for a person to operate a motor vehicle while under the influence of alcohol. "Under the influence" means that a person's physical or mental abilities are impaired to the extent that he can no longer drive as well as a cautious sober person.

California Vehicle Code 23152(a) also makes it a crime for a person to drive while intoxicated. The statute sets forth the "per se" definition of DUI, and states that a person is guilty of DUI if he is driving with a blood alcohol content (BAC) of 0.08% or higher.

First, second and third DUI offense charges are prosecuted as misdemeanors in California. Penalties for a DUI conviction may include: