Penal Code 21310 PC makes it a crime in California to carry a concealed dirk or dagger. A “dirk or dagger” is defined as a knife or other instrument, with or without a handguard, capable of ready use as a stabbing weapon, which may inflict great bodily injury or death. This definition excludes most pocket knives unless the blade is locked into position.

The text of 21310 PC states that “any person in this state who carries concealed upon the person any dirk or dagger is punishable by imprisonment in a county jail not exceeding one year or imprisonment.”

There are a number of legal defenses a defendant can assert. Common defenses include:

A violation of this code section is a wobbler offense. This means that a prosecutor can charge it as either a: 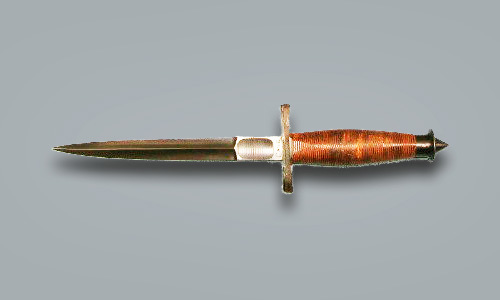 1. When is it a crime to carry a dirk or dagger?

21310 PC is the California statute that makes it a crime for a person to carry a concealed dirk or dagger.1

A prosecutor must prove the following to convict a defendant under this statute:

Note that a prosecutor does not have to prove that:

The fourth element above is a question of fact. This means a judge or jury will decide it based on all of the facts of a case.4

Questions often arise under this statute on the meaning of “dirk” and “dagger.”

1.1. Definition of dirk and dagger

Note that folding knives (other than switchblades) are considered a dirk/dagger only if:

This means a person can legally carry a concealed pocketknife if it is closed or if the blade can't be locked.8

A person can also legally carry a dirk or dagger if:

Defense attorneys employ a number of legal strategies in a 21310 PC case. Three common defenses are:

This section only applies to concealed dirks and daggers. Further, California criminal law has a technical definition of these knives. This means it is a defense for the accused to show that:

Example: Harry never leaves his house in L.A. without a folding knife in his pocket. Since the knife is in the closed position, it does not qualify as a dirk or dagger under 21310 PC. Therefore, he is lawfully allowed to carry it concealed throughout California.

Recall that an accused is only guilty under these laws if he had a concealed dirk/dagger. Therefore, a defendant can try and overcome a charge by showing that he was lawfully carrying a dirk.

Example: Julie walks around San Diego with a small dirk in a sheath suspended from her waist belt. A concerned pedestrian points out Julie to a police officer. But when the police officer sees that the sheath is being carried openly and not concealed, the officer explains to the pedestrian that Julie is not violating 21310 PC.

Police cannot conduct a search or take property without a valid search warrant (or an exception to the search warrant rule). If authorities obtain evidence from an unlawful search and seizure, then the defense can bring a motion to suppress evidence of the illegal weapon. If granted, this will likely lead to a dismissal of the charges.

Example: A San Francisco police officer sees Tom walking down the street wearing an anti-cop t-shirt. Offended, the officer stops and frisks Tom and finds that Tom is carrying a concealed dagger. If Tom gets charged with violating 21310 PC, Tom could ask the judge to disregard the knife as evidence since the officer had no legal right to stop and frisk him.

A violation of these laws is charged as a wobbler offense. A wobbler is a crime that a prosecutor can charge as either a:

A conviction under these laws will not have any immigration consequences.

Some California crimes result in a non-citizen being either:

But a dirk or dagger conviction will not have this result.

A person can get an expungement following a dirk or dagger conviction.

Under Penal Code 1203.4 PC, an expungement means a defendant is released from many of the hardships caused by a conviction.12

Recall that a prosecutor can charge a PC 21310 violation as either a misdemeanor or a felony.

An accused then will lose his gun rights if he is convicted of felony dirk or dagger concealment.

There are three crimes related to carrying a concealed dirk or dagger. These are:

California prohibits the possession, sale, manufacture or import of the following knives

Like PC 21310 violations, crimes involving the above knives are charged as wobblers.

Penal Code 171b PC makes it a crime for a person to:

Penal Code 626.10a1 PC makes it illegal to bring any of the following onto a public or private school:

Note that if a person brandishes a concealed dirk or dagger, he can be charged under both:

For information on knife laws in Nevada and Colorado, please see our articles on: