There are several legal defenses that you can use to combat a charge of vandalism. Some of the most common include:

The penalties of a conviction for vandalism depend on the value of the property at issue. The vast majority of vandalism cases are misdemeanors that carry less than a year of jail time. However, if the property was worth $1,000 or more, it can be a felony. Felony convictions come with over a year in jail.

Many vandalism cases are juvenile offenses. These cases are often taken through juvenile court. The potential penalties in those cases are very different. They do not focus on punishing a defendant. Instead, they focus on rehabilitating them. 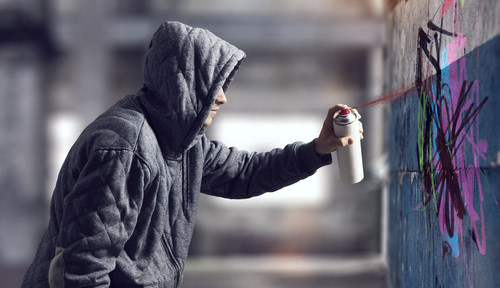 Vandalism is a catch-all term for several types of crime in Colorado that prohibit knowingly damaging someone else's property. These include:

Vandalism is different from theft in that the property is damaged, rather than taken.3

The offense of vandalism depends on the value of the property that was damaged. Vandalizing expensive property carries harsher penalties for a conviction.

Example: Mary is talking on the cell phone when she causes a car accident.

In Colorado, you acted knowingly if your conduct was nearly certain to cause the result. It includes conduct that was intentional.

The prosecutor has to prove that you acted knowingly beyond a reasonable doubt.

1.2. How is property valued for vandalism charges?

The value of the property that was damaged is important in vandalism cases.4 The more expensive the piece of damaged property, the higher the penalties of a conviction will be.

Courts try to determine the actual value of property that has been destroyed.5 This often relies heavily on the property's market value.6

Where the property is unique, courts use the following factors to value it:

Where the property was damaged, but not destroyed, courts use the reasonable costs of repairing it.8 Those costs cannot go above the costs of replacing it, had it been destroyed.9

You can commit vandalism on property that you partially own. If the other owners do not consent to the damage, you can be charged with a crime.

There are several common legal defenses to a charge of vandalism in Colorado. They include:

The first 2 defenses are complete defenses that can lead to an acquittal. The last defense is a partial defense. It would lower the penalties of a conviction, if successful.

You cannot be liable for vandalism if the owner consented to the damage. This is a frequent legal defense to vandalism charges filed over graffiti.

Example: Gabrielle hires Michaud to paint artwork on the outside wall of her coffee shop.

Vandalism has to be done knowingly. You cannot be liable for vandalism if you acted negligently or even recklessly.

2.3. The value of the property is not so high

The penalties of a vandalism conviction depend on the value of the property. Proving that the property was not worth as much as the prosecutor claims it was can reduce the penalties.

This defense does not lead to an acquittal. It just reduces the sanctions of a conviction.

3. Penalties of a vandalism conviction

The penalties of a conviction for vandalism usually depend on the property's value10. If you get charged with criminal mischief, those penalties can include:

Juveniles charged with vandalism face different penalties. These penalties focus more on rehabilitating a defendant than on punishing them. As a result, young people convicted of vandalism are less likely to be sentenced to jail and made to pay a fine. Instead, they are often sanctioned with a mix of:

If you vandalize someone else's property, you can also be sued for compensation.11 This civil lawsuit is different from the criminal charge for criminal mischief that you would face. A conviction for criminal mischief can doom your defense to the civil charge. You could have to pay the property owner the costs of repairing or replacing their losses.

4. Similar offenses of vandalism in Colorado

Some criminal offenses in Colorado are similar to vandalism or criminal mischief. Others are often filed alongside vandalism charges.

These related offenses include:

Contact our Colorado criminal defense lawyers for the legal help you need. By raising the legal defenses most applicable to your case, you can invoke your rights and protect your future. For cases in California or Nevada, please visit our pages on Penal Code 594 PC - California Vandalism Laws and NRS 206.310 Nevada's Vandalism and Malicious Destruction of Property Laws.