Misdemeanor theft / larceny in Colorado is defined when someone intentionally steals another's property valued from $50 to less than $2,000. The punishment for misdemeanor theft depends on the worth of the money or goods stolen:

The judge may also order the defendant to pay victim restitution in Colorado. Additionally, defendants may be able to serve probation in Colorado in lieu of incarceration as part of a Colorado plea deal.

Common examples of misdemeanor larceny offenses may include:

Depending on the case, defendants may be able to fight their theft charges by arguing either: 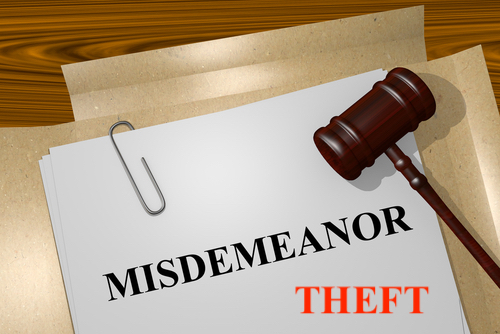 Larceny of anything worth at least $50 but less than $2,000 is a Colorado misdemeanor offense.

1. When is theft a misdemeanor in Colorado?

Misdemeanor theft (a.k.a. larceny) in Colorado law occurs when someone steals another's property valued from $50 to less than $2,000.

Shoplifting is one of the most common types of larceny, but many different scenarios qualify as theft under section 18-4-401 of the Colorado Revised Statutes (C.R.S.). These include:

Note that a person can be convicted of stealing property he/she co-owns if the person does not get authorization from the co-owner(s) first.1

Most misdemeanor crimes are probation-eligible.

Theft of anything worth over $50 but less than $2,000 is a misdemeanor in Colorado. Consequences of misdemeanor theft range from:

Predictably, judges are more likely to grant probation instead of jail to defendants with no criminal records.2

The specific penalty range for misdemeanor larceny in Colorado turns on the value of the property allegedly stolen.

If defendants allegedly committed multiple thefts within a six (6)-month period, prosecutors may add together the values of all the stolen items and charge the defendant with just one theft count.3 Note that courts are supposed to determine value on a reasonable basis and not pure speculation.4

Also note it is automatically a felony to pick-pocket or to steal from a disabled or elderly person, even if the stolen items are worth less than $2,000. Learn more about Colorado felony theft laws.

Theft of property worth at least $50 but less than $300 is a class 3 misdemeanor in Colorado. The sentence is:

Theft of property worth at least $300 but less than $750 is a class 2 misdemeanor in Colorado. The sentence is:

Theft of property worth at least $750 but less than $2,000 is a class 1 misdemeanor in Colorado. The sentence is:

Depending on the case, the judge may grant probation instead of jail.5

Unsuccessful attempts to steal property are prosecuted as the next less serious class of offense.6

Stealing less than $50 worth of property is a class 1 petty offense, carrying:

The judge may grant probation in lieu of jail for Colorado petty offenses.

Meanwhile, theft of anything worth $2,000 or more is a Colorado felony. Depending on the value of the item(s), Colorado felony theft can be punished by:

Depending on the case, the judge may grant probation in lieu of prison.7

3. What are common defenses to misdemeanor theft?

The most effective defense to Colorado theft charges always turns on the unique circumstances of the case and what kind of property is at issue. Some typical defense arguments are:

It also may be possible to get larceny charges reduced by showing that the property is actually less valuable than the prosecution claimed it was in the complaint.

3.1. Defendant was the sole owner of the property

The D.A. has the burden to prove guilt beyond a reasonable doubt.

It is impossible for someone to steal something that belongs solely to him/her. Evidence of ownership may include:

If the defense attorney can show that the defendant was the sole owner of the property at issue, the theft charges should be dropped.

3.2. Defendant had no intent to take the property

Theft is an intent crime in Colorado.8 Therefore, people are not criminally liable for theft if they genuinely did not realize they took the property:

Example: Janice is rushing to get to work and grabs her roommate Tara's iPad by mistake. Later Tara sees that her iPad is gone and reports it stolen. But since Janice did not realize the iPad was not hers, Janice committed no crime. Instead, she would just be civilly obligated to return the iPad.

Intent is often difficult for prosecutors to prove beyond a reasonable doubt because there is no way to see what is going inside the defendant's head. As long as there insufficient evidence to show that the defendant had intent to permanently deprive the victim of his/her property, a conviction cannot stand.

Police have strict rules to follow when conducting searches and seizures under Colorado law. If law enforcement crossed the line by failing to get a Colorado search warrant -- or not having a lawful reason to search without a warrant -- then the defendant may have legal recourse:

The defense attorney can file a motion to suppress evidence in Colorado, which explains to the judge that the state's evidence was tainted by the unlawful search. If the judge agrees and disregards the tainted evidence, the D.A. may drop the case for lack of proof.

It is common for larceny suspects to face prosecution for theft as well as related crimes, such as:

Call our Colorado criminal defense attorneys at 303-222-0330 for a free consultation today.

Arrested in Colorado for misdemeanor larceny? Contact our Denver criminal defense attorneys for a FREE consultation. We will do everything in pursuit of the best resolution possible of your matter. You can reach us by filling out the confidential form on this page, or by phoning us at our Denver home office: