In Colorado, offering money or another benefit to a public official to influence their actions is bribery. Offering a bribe or asking for a bribe is a felony. The penalties for bribery of a public official includes up to 12 years in prison and a fine of up to $750,000. In this article, our Colorado criminal defense lawyers will address: 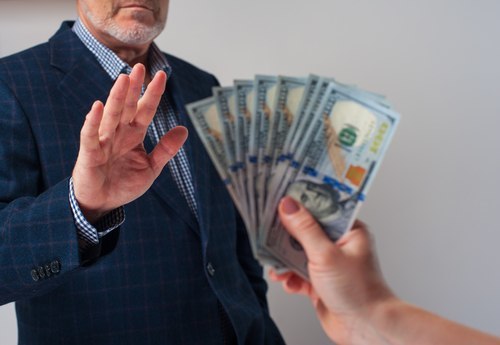 In Colorado, offering money or other benefit to a public official to influence their actions is bribery. Offering a bribe or asking for a bribe is a felony.

Bribery involves offering money, a promise, or favor to influence the actions of a person in a position of trust. Bribery could involve offering money to a police officer in order to get out of a ticket, or paying a politician millions of dollars to get a lucrative public construction project.

Bribery is illegal for the person offering a bribe and for the official who asks for a bribe. Bribery is not always conducted in an obvious way. A politician may not come out directly and say that if you pay them a certain amount of money they will vote a certain way. Bribery can be difficult to prove in court, and prosecutors often rely on indirect evidence to show that bribery took place.

There may be some overlap between criminal bribery and lobbying. Lobbying involves supporting a public official with campaign contributions while advocating on behalf of a certain group. This may seem like a minor distinction, especially if the public official votes in favor of the lobby's position after receiving a “donation.”

2. What are the penalties for bribery?

Bribery is considered a “crime of moral turpitude,” or a crime against the public good. Crimes of moral turpitude have immigration consequences. If you are applying for citizenship, a bribery conviction may be a deportable offense.

3. What kinds of bribery are illegal in Colorado?

There are a number of statutes in Colorado that address bribery and bribery-related offenses. This includes compensation for past actions, soliciting compensation, and attempting to influence public officials. The penalties for these bribery offenses range from a class 3 felony to a class 2 misdemeanor.

A person commits bribery if he or she offers or provides any pecuniary benefit upon a public servant with the intent to influence the public servant's vote, judgment, or other action.

Bribery is also a criminal offense for any public servant to solicit, accept, or agree to accept any pecuniary benefit with the understanding that the public servant's vote, opinion, judgment, or other action will be influenced.

It is still a criminal offense if the public official is compensated after the fact. It is not a defense for a public official to wait until after the made a certain decision, opinion, vote, or recommendation to later ask for or accept any pecuniary benefit. Soliciting or accepting a benefit for past official behavior is a class 6 felony. Penalties include 12-18 months in prison and a fine of up to $100,000.

It is a criminal offense for a public servant to request pecuniary benefit for performing an official action knowing they are required to perform that action without compensation. Soliciting unlawful compensation (Colorado CRS 18-8-304) is a class 2 misdemeanor. Penalties include 3 to 12 months in jail and a fine of up to $1,000.

Trading in public office includes offering or conferring a pecuniary benefit upon a public servant or party officer with the agreement that the public servant nominate or appoint a particular person. Similarly, soliciting or accepting a pecuniary benefit with the agreement to nominate a candidate or appoint a particular person to public office is a criminal offense. Trading in public office is a class 1 misdemeanor. Penalties include 6 to 18 months in jail and a fine of up to $5,000.

Bribery may be related to other criminal offenses. These include rigging of public contests, failing to disclose a conflict of interest, and attempting to influence a public servant.

In Colorado, it is a criminal offense to rig a contest under C.R.S. 18-5-402. This includes conferring a benefit on a participant, tampering with the contest, or engage in a contest knowing that the contest is not conducted in compliance with the rules. Rigging a public contest is a class 3 misdemeanor. Penalties include up to 6 months in jail and a fine of up to $750.

If you have been accused of bribery or attempting to bribe a public official, please contact us at Colorado Legal Defense Group. Our Colorado defense attorneys have many years of experience representing clients who have been charged with criminal bribery offenses. We are among the best Colorado criminal defense attorneys to call. Contact us today for a free consultation by phone or in-person or in our Denver law office.