Colorado judges find people in contempt of court when they:

People can be held in contempt in civil or criminal cases. Commonly, contempt issues arise in alimony and child support matters.

Holding people in contempt is a way for judges to curb unlawful or uncooperative behavior. And it does not matter if this behavior occurs inside or outside the courtroom. Colorado Rule of Civil Procedure 107(a) defines contempt as:

Disorderly or disruptive behavior, a breach of the peace, boisterous conduct or violent disturbance toward the court, or conduct that unreasonably interrupts the due course of judicial proceedings; behavior that obstructs the administration of justice; disobedience or resistance by any person to or interference with any lawful writ, process, or order of the court; or any other act or omission designated as contempt by the statutes or these rules.

The punishment for being held in contempt varies by case. Typically, judges impose fines and/or jail. And the incident may prejudice the court against the person's case.

Typical defenses to contempt allegations include: 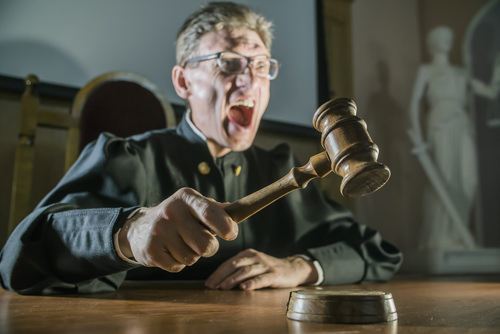 People who defy court orders or disrespect the court face fines and/or jail.

1. What is contempt of court in Colorado?

There are two situations where courts find people in contempt:

1.1. Violation of a court order

Only knowing violations of a judicial order qualify as unlawful. People who are unaware of a court order cannot be held in contempt for violating it.1

When a judge issues a contempt order for disruptive conduct, the order has to spell out the facts of what the person did wrong.5

Direct contempt of court is conduct that happens in the presence of the judge.6 It usually involves disruptive behavior.

Example: After Jeff is found guilty at trial, Jeff starts screaming about how unfair the trial was. This is direct contempt since the judge is witnessing it.

In these cases, contempt can happen very quickly.7 The judge can hold people in contempt without a hearing. The record just needs to show they were being disruptive.8

Example: The traffic court judge calls a brief recess and leaves the courtroom. Tony then starts yelling at the clerk about his ticket. This is indirect contempt because the judge was not present.

Indirect contempt cases require a hearing before the court can issue penalties.

Judges have broad discretion to decide penalties for contempt of court.11 And the court has to clearly state whether a contempt order is remedial or punitive.12

Punitive contempt orders are issued to punish people for bad behavior in the court process.15 In order for contempt to be punitive, the person's conduct had to have been willful.16

The judge can appoint a prosecutor to pursue these cases. The accused has a right to a lawyer in the contempt proceeding. The accused also has the right to have the case heard by another judge.17

In general, penalties for a punitive order of contempt are:

4. How are contempt proceedings brought?

If a person is disrupting court proceedings, the judge can usually issue a contempt order right then and there. There does not need to be another hearing as long as the judge witnesses the disruption.

Then the court will schedule a court hearing where both parties can present evidence on the matter. If the subject of the court order fails to appear at this hearing, the judge will probably issue a bench warrant for his/her arrest.

5. What are the legal defenses?

5.1. The court order was invalid

To be effective, court orders have to meet certain requirements. If they fail in any way, the order may carry no legal weight. A court order can be invalid if:

Example: Bill must pay alimony for three years. After the three years are up, his ex-wife files a contempt citation with the court alleging that Bill has stopped making payments. But since the order expired after three years, Bill did not violate the order.

Violating an invalid order is not illegal. If it can be shown the order is void, then contempt charges cannot apply.

5.2. The person did not know about the court order

No contempt occurs when a person unknowingly violates a court order.

If the subject of the order is not served correctly, then he/she does not receive it. Without receiving the court order, a person is under no obligation to follow it.

5.3. The person was unable to comply with the court order

Contempt is not appropriate in situations where a person is physically unable to comply with an order.

Example: Jake is ordered to appear in Denver Municipal Court. On the way to court he is hit by a car and taken unconscious to the hospital. Jake had every intention to appear in court. So he should not be in contempt because forces outside his control forced him to miss court.

This defense is also common in child support cases. Courts often hold people in contempt for missing payments. But if the non-custodial parent provides evidence he/she does not have the means to pay, no contempt occurred.

Also see our article What constitutes contempt of court in Colorado?

In California? Learn about contempt of court in California (Penal Code 166 PC).