Under Colorado law, complicity (being an accomplice) is participation in criminal activity with another person or persons. When someone helps or encourages another to commit a crime, it can lead to the same criminal charges as if they had committed the crime themselves. 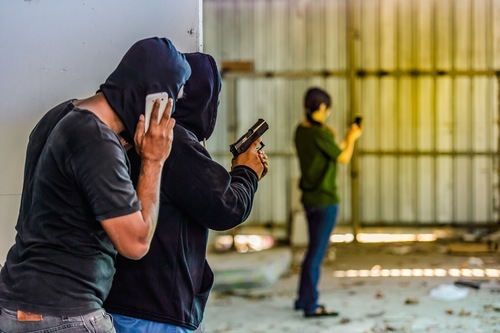 In Colorado, complicity is participation in criminal activity with another person or persons.

1. What is complicity in Colorado?

Complicity is the doctrine that another person (an accomplice) can be held accountable for a crime if they assisted, aided, abetted, encouraged, solicited, or directed the criminal actions of another person. This includes assisting with the crime before it takes place, while it is happening, and after the offense has been committed.

“A person is legally accountable as principal for the behavior of another constituting a criminal offense if, with the intent to promote or facilitate the commission of the offense, he or she aids, abets, advises, or encourages the other person in planning or committing the offense.”1

This doctrine is not a separate criminal offense and no one can be charged with counts of “complicity” or “being an accomplice.” It is essentially a principle of law that allows prosecutors to treat those who were involved in a crime – no matter how small a role that they played – the same as the person who committed the crime.

2. How does being an accomplice apply to criminal charges?

Complicity is charged as if the accomplice had committed the crime. There is no separate crime of complicity. Instead, if a prosecutor believes an individual is complicit by promoting or facilitating the commission of a crime, they may be charged with the underlying crime committed by another person.2

Example: Aaron tells his friend Becky about a store that does not lock their safe at night. Aaron gives Becky a description of the room where the safe is held and tells her what time the guard goes on break. Becky calls her friend Carl and tells him about the plan to rob the store. Carl agrees to drive Becky to the store and wait outside. When Becky breaks in and steals the money, she gets caught and is arrested.

In this example, Aaron, Becky, and Carl can all be charged with burglary. Even though Becky was the only one who broke into the store to commit a crime, both Aaron and Carl are accomplices to the crime. Aaron told Becky about the opportunity to commit the crime and Carl helped by driving Becky to the scene of the crime.

Second-degree burglary of a store may be charged as a class 4 felony, with penalties including 2-6 years in prison, and a fine of up to $500,000. Aaron, Becky, and Carl could all face felony burglary charges for their role in the crime.

3. What are the penalties for complicity in a criminal offense?

The penalties for an accomplice to a criminal offense are the same as those for committing a criminal offense. The minimum and maximum penalty range will still apply, even if you only had a small role in the crime. Depending on the level of participation and role in the crime, minor participation could be considered a mitigating factor. Mitigating factors may reduce the possibility of facing the maximum penalty.

4. Is complicity the same as conspiracy?

The crime of “conspiracy” in Colorado is not the same as complicity. A criminal conspiracy is an agreement made with one or more other people to commit a crime and act in furtherance of the plan. There are two primary differences between a conspiracy and complicity.

Conspiracy requires some action taken in furtherance of the crime. Complicity can involve an accomplice taking no action towards completing the crime or merely remaining silent. Helping, assisting, encouraging, or soliciting another to commit a crime, before or after the act, may be charged as if the accomplice committed the crime.

5. Accessory to a Crime

If you are facing criminal charges because of someone else’s criminal actions, please contact us at Colorado Legal Defense Group.

The best-case scenario following a Colorado arrest is being released from jail on a personal recognizance bond (PR bond), which means the defendant does not have to put up any bail bond money. Instead, the defendant just has to promise to show up to all future required court dates. PR release is also commonly called ...

Proof Beyond a Reasonable Doubt – How is it Defined?

Is forgery a felony or misdemeanor?

Forgery can be either a misdemeanor or a felony, depending on the state and the circumstances. In California, for example, forgery is a wobbler. Prosecutors can choose whether to pursue felony or misdemeanor charges. However, if the amount at issue is $950 or less and the defendant does not have a prior offense, it is ...