It typically depends on whether the cell phone owner has been arrested, and if the police have a search warrant to search the phone:

When the police have a search warrant

If the defense attorney can convince the judge that the search warrant was invalid, then any evidence from the cell phone may be excluded from evidence. Learn more about motions to suppress evidence in Nevada. 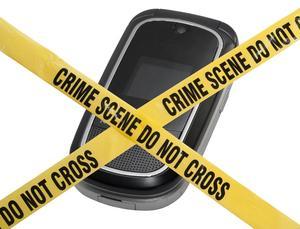 When the defendant has been arrested

Once the police arrest someone, the police may conduct a warrantless search of the person's body and immediate surroundings for anything that could harm the officers, such as guns. The U.S. Supreme Court has held that looking through an arrestee's cell phone falls outside the bounds of these "searches incident to arrest."[1]

Therefore, police who want to search the contents of an arrestee's cell phone should get a warrant first. In the meantime, the police should store the cell phone in a safe area.

When there is an arrest warrant out for the defendant

But once the person gets arrested, presumably the police would need another warrant in order to search the contents of the phone.

When the police ask for a cell phone's passcode

There is no Nevada law on whether and when people are required to give police their cell phone passcodes. But other courts have ruled on this subject...

The Florida Supreme Court has held that compelling people to provide their passcode is not a violation of the Fifth Amendment right against self-incrimination as long as the police have a warrant to search the phone. This is a similar idea to when police have a search warrant of a house--the police may break in if the homeowner refuses to let the police in.[3]

But a federal court out of Pennsylvania held just the opposite: The could ruled that compelling people to provide their cell phone's passcode does violate their constitutional rights because passcodes are "testimonial" in nature.[4]

Muddying the waters even further, a Virginia circuit court has ruled that fingerprint protections do not share the constitutional protections that passcodes may have because biometric data (like fingerprints) are not protected by the Fifth Amendment. So a Virginia police officer may not compel people to reveal their passcodes but may compel them to unlock their phones with their fingerprints.[5]

Nevada law has very little legal precedent on whether and how the police may search cellphones and compel passcodes. So unless a Nevada police officer can produce a warrant, people are advised to politely decline surrendering to police their phones and passwords. If the police seize them, then a good criminal defense attorney may be able to argue that the police overstepped their constitutional bounds.

Currently, the U.S. Supreme Court is considering the question of whether warrantless searches and seizures of cell phone records, which include the location and movements of cell phone users, violate the Fourth Amendment. The case was argued in 2017, and a decision should be handed down in 2018.[6]