Can recreational marijuana be used on college campuses in Nevada?

No. Nevada law limits the recreational use of weed to private residences. That does not include dorm rooms or any university-owned student housing, nor anywhere else on college campuses. Smoking pot on campus carries not only a $600 criminal fine, but it also makes the student vulnerable to discipline or expulsion. 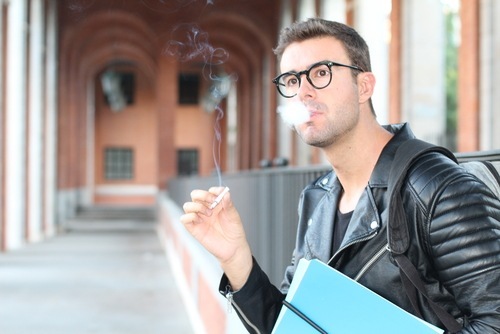 The same rules hold true for medical marijuana in Nevada. Students who are medical pot cardholders are encouraged to live off campus in their own apartments or homes. Using medical pot on a college campus is against both university policies and federal law.

Regarding UNLV specifically, the official policy from the Office of Housing and Residential Life reads:

Marijuana: As an institution that receives federal grants, contracts and funds for financial aid, UNLV is bound by certain federal laws and, as a result, must establish and enforce policies prohibiting the manufacture, use, and distribution of controlled substances by our students or others within our control. Marijuana — including medical marijuana — is, by definition, a controlled substance and therefore illegal under federal law. Such federal laws are not affected by Nevada's passage of laws legalizing marijuana.

The University will continue to enforce its current policies, including the Code of Student Conduct, regarding controlled substances. Any student who violates university policy prohibiting the manufacture, use or possession of illegal drugs on campus will be subject to referral for disciplinary action, including removal from campus housing, and, if warranted, criminal action.

Although the State of Nevada has passed laws legalizing marijuana, possession and/or use of medical or recreational marijuana remains prohibited anywhere on the UNLV campus, including all university housing and facilities. Possessing a medical marijuana card does not, in any manner, change or modify the fact that marijuana is a controlled substance and, therefore, illegal.

Remember that although Nevada law now permits possession of up to one ounce (1 oz.) of weed, federal law still prohibits it. Though it is unlikely the feds will arrest otherwise law-abiding recreational users.