Although Nevada firearm laws do not ban bump stocks, federal law will prohibit bump stocks starting on March 26 of 2019. This federal ban was a reaction to the Vegas Massacre on October 1st, 2017.

Bump stocks are rifle accessories that take place of the gun's “standard stock,” which is the piece that rests against the shooter's shoulder. As long as the shooter holds down the trigger and places pressure on the barrel, the bullets will fly almost as quickly as an automatic firearm. During the Vegas Massacre, the shooter was able to unleash approximately 90 shots in only 10 seconds.

The rapid firing of gunshots during the Vegas Massacre sounded like an automatic weapon such as a machine gun. Machine guns are banned under federal law unless they were lawfully possessed and registered prior to May 19, 1986. However, the shooter used several semi-automatic weapons that he modified with bump stocks, which allowed the firearms to fire faster. Bump stocks do not technically convert semi-automatic guns to automatic ones, which is why they were considered legal. But starting in late March of 2019, bump stocks will be defined as a machine gun, effectively banning them under federal law.

People who own bump stocks will need to destroy them or surrender them to the Bureau of Alcohol, Tobacco, Firearms and Explosives in order to avoid federal penalties under 18 U.S. Code 924 (a)(2) of: 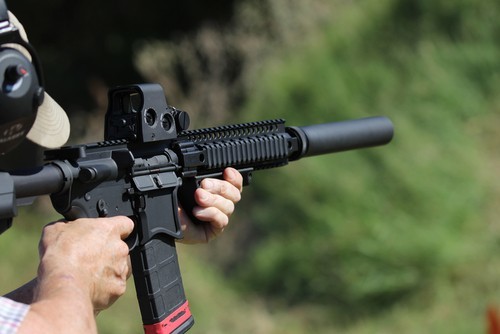