Can a felon hunt with a crossbow in Colorado?

No. Felons in Colorado may not possess any weapons, including crossbows. Therefore, felons may not hunt with crossbows in Colorado. 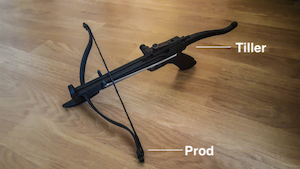 Felons may not possess crossbows in Colorado.

Crossbows consist of a "prod" that is mounted perpendicularly to a "tiller." It shoots projectiles called bolts or quarrels, which are similar to arrows.

Unlike bows and arrows -- which require the user to manually pull back and hold the bowstring -- crossbows have a lock to hold back the bowstring. So all crossbow users need to do to release the bowstring is depress a trigger similar to a gun's.

Possession of a weapon by a previous offender

People convicted of a felony crime may not possess weapons in Colorado, including non-firearms such as crossbows.

Therefore, the Colorado crime of possession of a weapon by a previous offender ("POWPO") under C.R.S. 18-12-108 occurs when a convicted felon knowingly possesses, uses, or carries a weapon such as a crossbow. It makes no difference if the purpose of the possession was for hunting.

In general, a POWPO offense is a class 6 felony carrying:

But a POWPO offense may be punished more harshly if the defendant's previous conviction was within the last 10 years and the conviction was for either:

In this case, a first-time POWPO conviction is a class 5 felony, carrying:

And a subsequent conviction is a class 4 felony, carrying:

However, having a hunting license does not give felons permission to possess weapons for hunting purposes. So unless a felon plans to hunt by using his/her bare hands or a net, it seems pointless for felons to obtain a license to begin with.

In practice, many convicted felons press their luck and do hunt with weapons in Colorado. But they risk getting a POWPO conviction (explained above), which would add another felony to their criminal history.

Convicted felons in Colorado may apply for a Governor's Pardon to restore their weapons rights. However, pardons are typically available only to people who finished their criminal sentences at least ten (10) years earlier. And even then, there is no guarantee that a pardon will be granted.

Qualifications for a Colorado governor's pardon include:

Learn more about applying for a Colorado Governor's Pardon.