Penal Code 647(h) is the California statute that makes it a crime to loiter on someone's property with the intent of committing a crime. The section applies to anyone who:

"Who loiters, prowls, or wanders upon the private property of another, at any time, without visible or lawful business with the owner or occupant."

Violations are misdemeanors. They are charged as disorderly conduct. 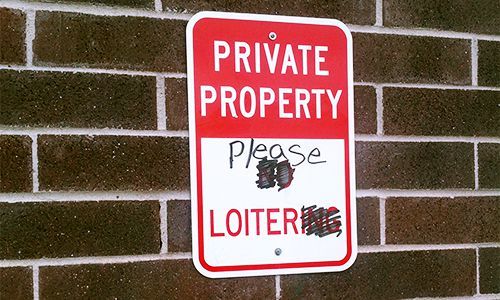 1. What is illegal loitering?

To make a case under Penal Code 647(h), a prosecutor must prove that the defendant:

All four of these facts must be proven beyond a reasonable doubt. Merely lingering in one spot is a crime under California loitering laws.2 Defendants have to be on the property for the purpose of doing something illegal. Moreover, to make a lawful arrest, police need probable cause to believe that the suspect is seeking to commit a crime.

2. What does "without a lawful purpose" mean?

Loitering is only a crime under PC 647(h) if it is done for an unlawful purpose. If someone is lingering somewhere with a lawful purpose, it is not a crime.

Context will dictate when a purpose for lingering is a lawful one. Examples of a lawful purpose include:

Only slightly different scenes can turn a lawful purpose into a seemingly unlawful one:

Police only need probable cause to apprehend someone for loitering. If they suspect someone is plotting a crime, they can make an arrest.

647h PC is often filed together with other criminal charges. Some of these include:

5. What legal defenses can be asserted?

People accused of loitering under PC 647(h) have legal defenses they can raise. Some of the most common include showing that:

Police need probable cause to believe that the loiterer is seeking to commit a crime. If they lack probable cause, detention and arrest for loitering violates the Fourth Amendment. Any evidence found as a result of the arrest will be excluded from court. This can doom all of the criminal charges stemming from the arrest, including those that are more severe than the loitering allegation.

Defendants who had a lawful purpose for their actions can explain this to defend against a charge for loitering. This can prevent a prosecutor from proving that they were lingering for an unlawful reason.

Violations of Penal Code 647 Section (h) are misdemeanors. The penalties for a conviction include:

This is in addition to the penalties of any related charges that have also been filed.